The Korean Grand Prix is the latest event on the ever-expanding Formula 1 calendar.

Although there have been months of speculation about its fate, and whether or not the track would be ready on time, race organisers did a great job to pull the track together for the weekend.

The infrastructure surrounding the venue may be far from complete - and the supposed city section of the Yeongam track is still missing its city - but drivers and photographers have all been left quite impressed with early impressions of the venue.

AUTOSPORT caught up with its regular photographic team to dig out some of the best pictures from the first day of action as everyone got their first proper peak at the circuit.

The crest on exit of Turn 6 - by Glenn Dunbar

On the run out of Turn 6, the cars climb up briefly before coming over a brow - and it's the one area of big elevation change on the track.

This is Lewis Hamilton as he comes over that crest, and it's taken from the outside of the following corner looking back up the track to capture a clear view of the cars. Ideally this shot would be taken from the inside of the turn, but there are a few too many advertising hoardings in the way. 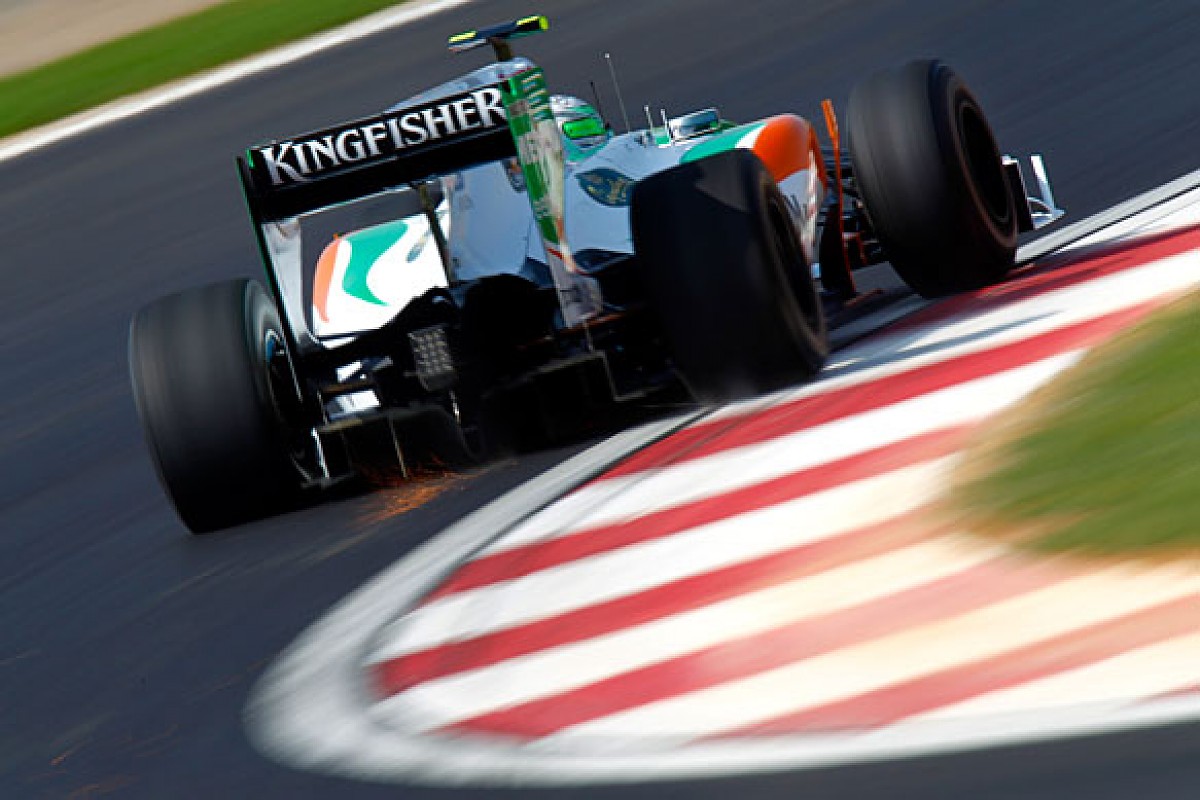 As the cars come down from the crest, they swoop through this downhill right hander - for a sequence of corners that has been modelled on the Maggotts/Becketts sequence.

This shot of the Force India captures nicely the car bottoming out and gives you a good idea of the speed as they vanish from view further down the track. 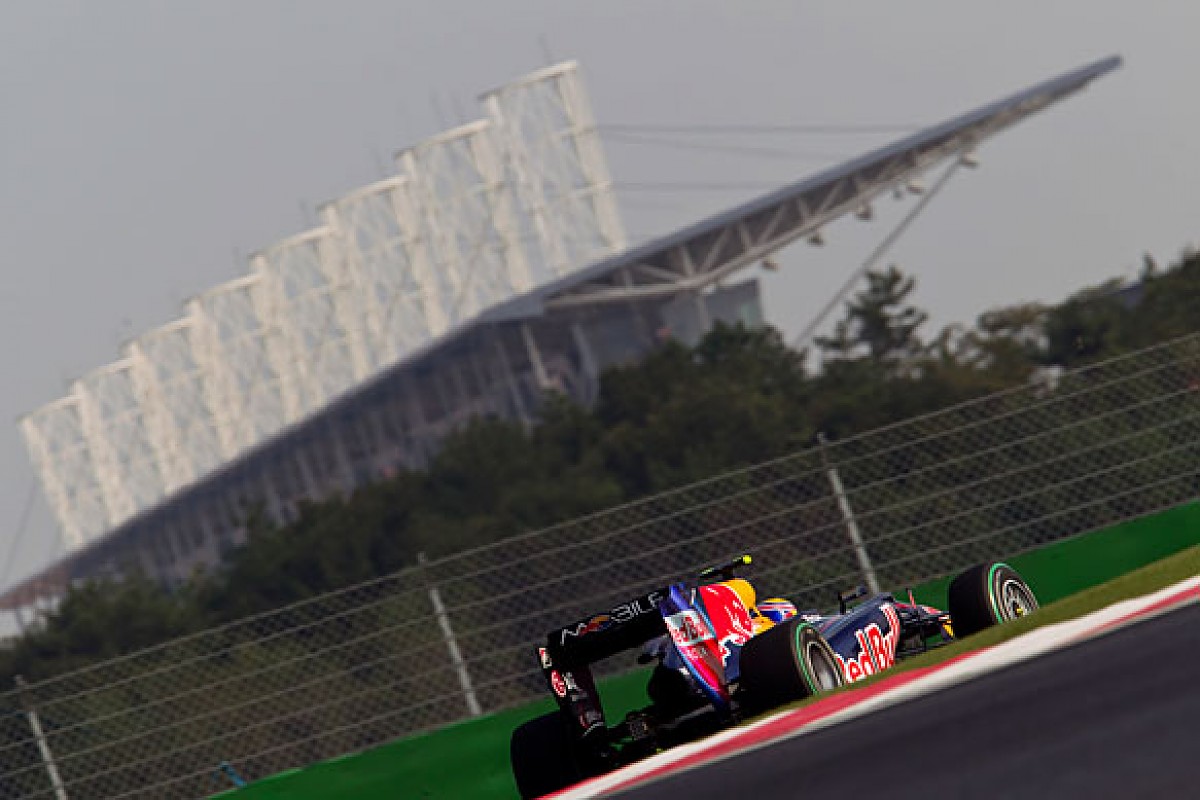 With the city having not yet been built in Korea, and the infrastructure not yet complete, one of the most notable features is the main grandstand.

This shot of Mark Webber, as he turns through Turn 12, shows the grandstand in the background and the angle helps bring the picture to light. 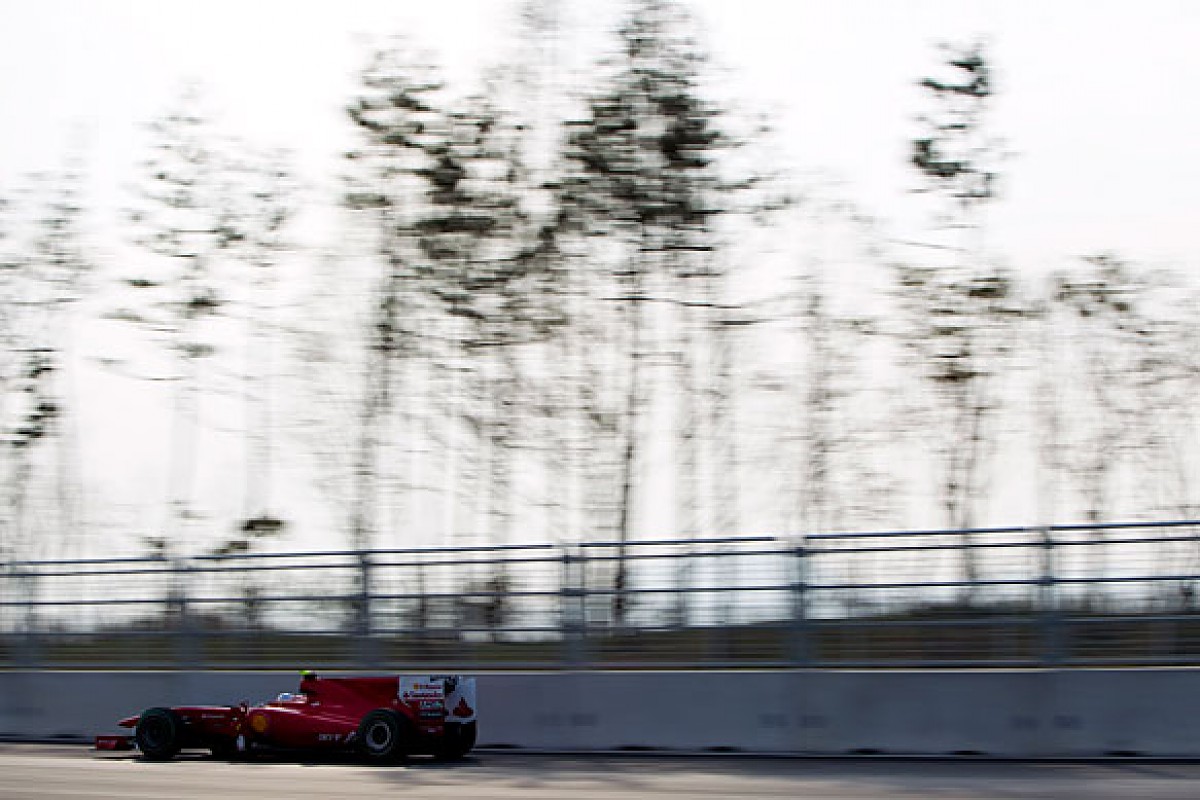 Here is Fernando Alonso as he runs close to the wall on the right hander at Turn 13. With chasing shots like this, it is important to try and find a nice background, and the shutter speed and late afternoon sunlight means the trees give it a ghosty/whispy effect. It's something different from the rest of the track. 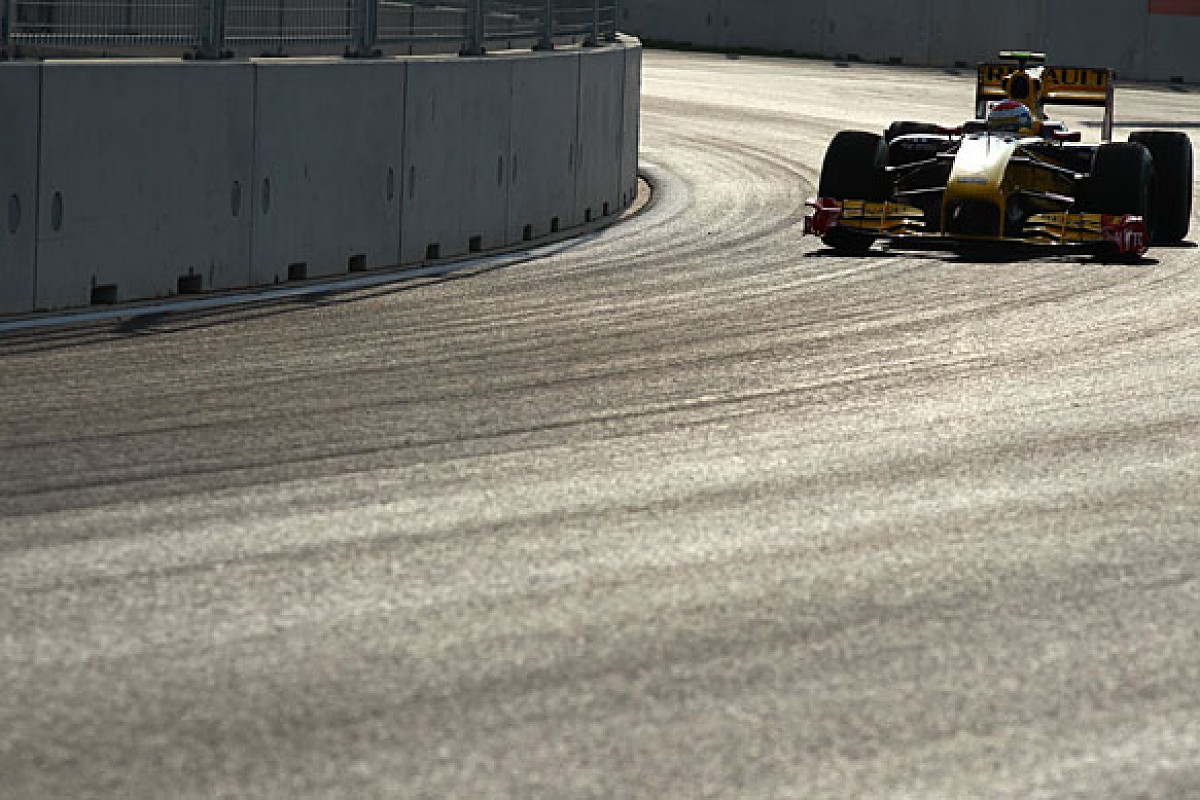 This is in one of the city sections of the track, and the drivers have to get quite close to the wall here if they are going to put in a quick lap.

Vitaly Petrov put in some fairly strong laps today as he got to grips with the circuit, and this long curving right hander is a pretty spectacular place to watch the cars. 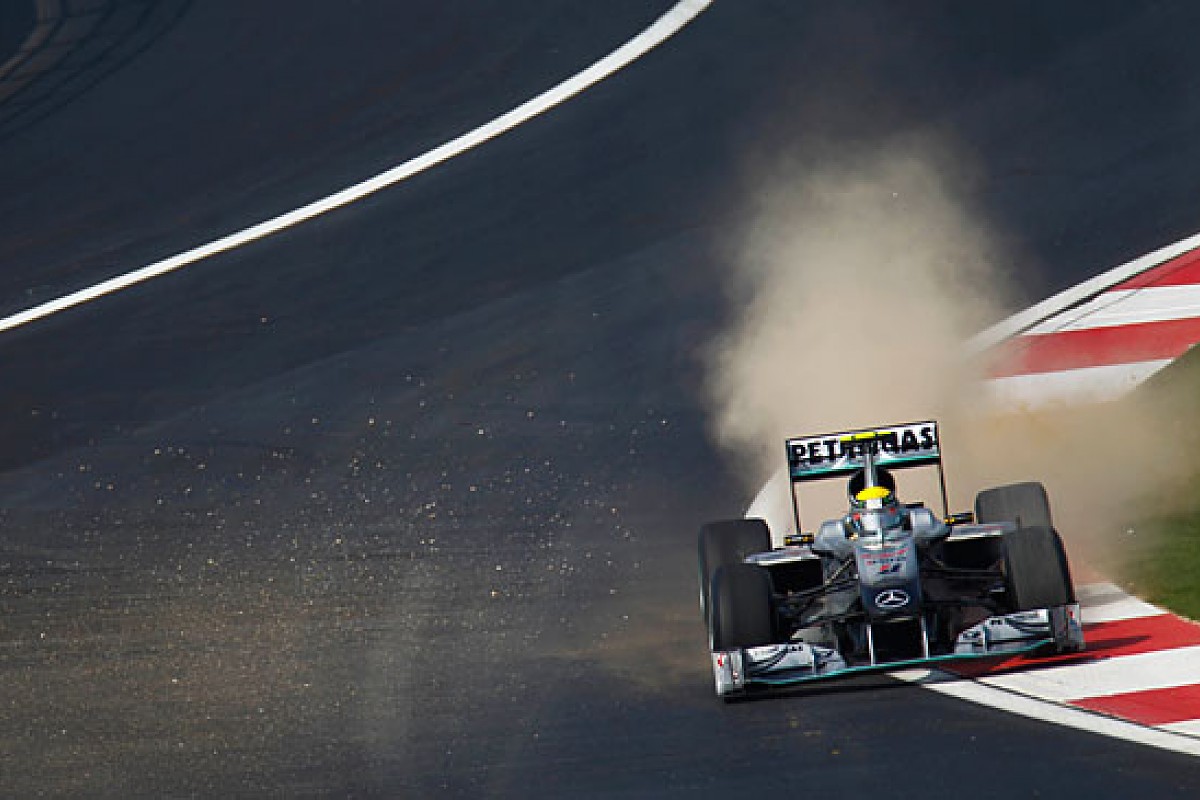 As the drivers exit Turn 17, they try and clip the apex of the following kerb - but a lot of them were totally straight-lining it today and bringing a lot of dirt onto the track.

It looks great on television and this shot captures just how much of the mud and dust was pulled onto the track today. 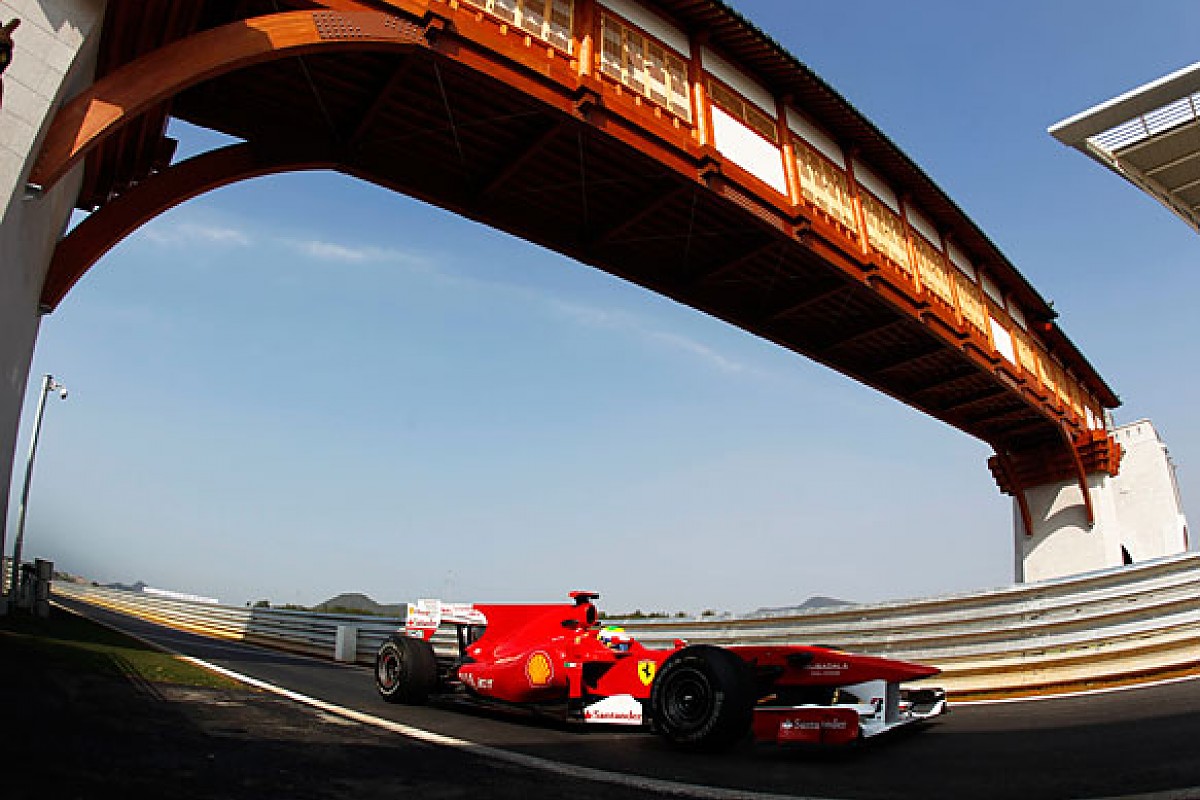 One of the final parts of the track to be complete is the bridge over the start/finish straight - which adds a bit of a Korean feel to the venue.

If you got down low in the pitlane then you could get a nice wide-angled shot of the car and the bridge together - in this case it was Felipe Massa as he came into the pits.