The Singapore and Suzuka circuits could not be more different in character or layout. The newness and innovation of the Singapore street race run at night contrasts to the classic and demanding sweeps of the Japanese track.

Both races demand high downforce and heavy braking, though. The street circuit in Singapore is one of the hardest on brakes on the calendar and, while the night race lacks high-speed corners, many teams brought aerodynamic updates with an eye on the three remaining venues with more traditional high-speed turns.

Only Ferrari and Renault's cars have reached the end of their development cycle, so every other team brought major upgrades, including wings, floors and a myriad of add-on parts to supplement the changes made for the final European races.

There have been few genuinely innovative ideas since the start of this season, with teams taking inspiration from each others' designs. But in Japan, BMW-Sauber appeared with a radical rear wing aimed at creating higher levels of downforce.

For many years, rear wings have been limited to just two elements - the greater number of elements, the more slots are created in between flaps. These slots send fast-flowing air underneath the wing to prevent the airflow from separating and stalling the wing. With two elements, the wing is limited in how steep an angle it can be set at and therefore how much downforce it can create.

At high-downforce tracks, some teams make use of a loophole in the rules to add a narrow 15cm slot in the middle of the wing. But having such a narrow exit behind the wing, the effect of the slot is limited.

BMW has widened the exit of the slot to the full width of the wing, which effectively gives the wing a third element. Air enters the slot above the wing and a higher pressure is created by the humps to the side of the inlet and the small wing above it. Air is ducted internally to exit in a slot spanning the entire wing and the flow exiting this slot prevents the separation and stalling problems of a steeper wing.

The rules demand the two elements to be a "closed section" to the side of the middle 15cm, so BMW's wing meets the wording of the regulation as there is no inlet in these areas.

If BMW can create a steeper wing without the problem of stalling, teams that have struggled with high-downforce set-ups could follow this trend.

BMW's massive upgrade also featured a revised front wing with the commonly-adopted Brawn-style endplates. The sidepods have been further undercut now that the team has stopped using its air-cooled KERS. New pod wings complete with rear view mirrors aid the airflow around the sidepods. The space around the cockpit that has been vacated by the mirrors has been re-used by a pair of small flow conditioners.

Less noticeable was the revised rear end. The F1.09 sported an entirely new aluminium gearbox casting which was repackaged to move the springs and dampers mounted atop the casing to be lower. It also freed up space for the new double deck diffuser. The effect of the lowered casing can be seen by the lack of bulge at the tail of the engine cover, freeing airflow over the top of the diffuser and beam wing.

In keeping with the theme used throughout the pitlane, the diffuser's upper deck was widened to the maximum 50cm, creating a larger volume to produce more downforce. 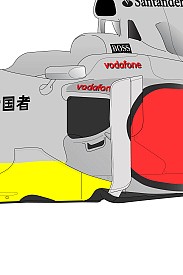 McLaren's resurgence continued in both Asian races, with new parts at each. For Singapore, the team brought yet another diffuser - which is the sixth iteration of its floor since the season began. The latest model retains the Brawn-like double deck arrangement, but this has been optimised and is no longer asymmetric.

Because the starter mechanism for the engine is offset to the right, the diffuser had a corresponding offset 'V' to the roof of the lower deck. The revised version is mated to yet another beam wing arrangement, which sits slightly higher, forming a small flap above the rear impact structure.

With the heavy braking demands of Singapore, the extended front wheel fairings were briefly tried with large exits on the trailing edge to balance the cooling effect with the need to control the flow off the front wing. But these fairings - originally tried at Monza - were not used in the race.

The new diffuser was retained for Japan and allied to new bargeboards ahead of the sidepods. They sported a distinctly taller, triangular profile compared to the low, rectangular versions run since the car's launch. 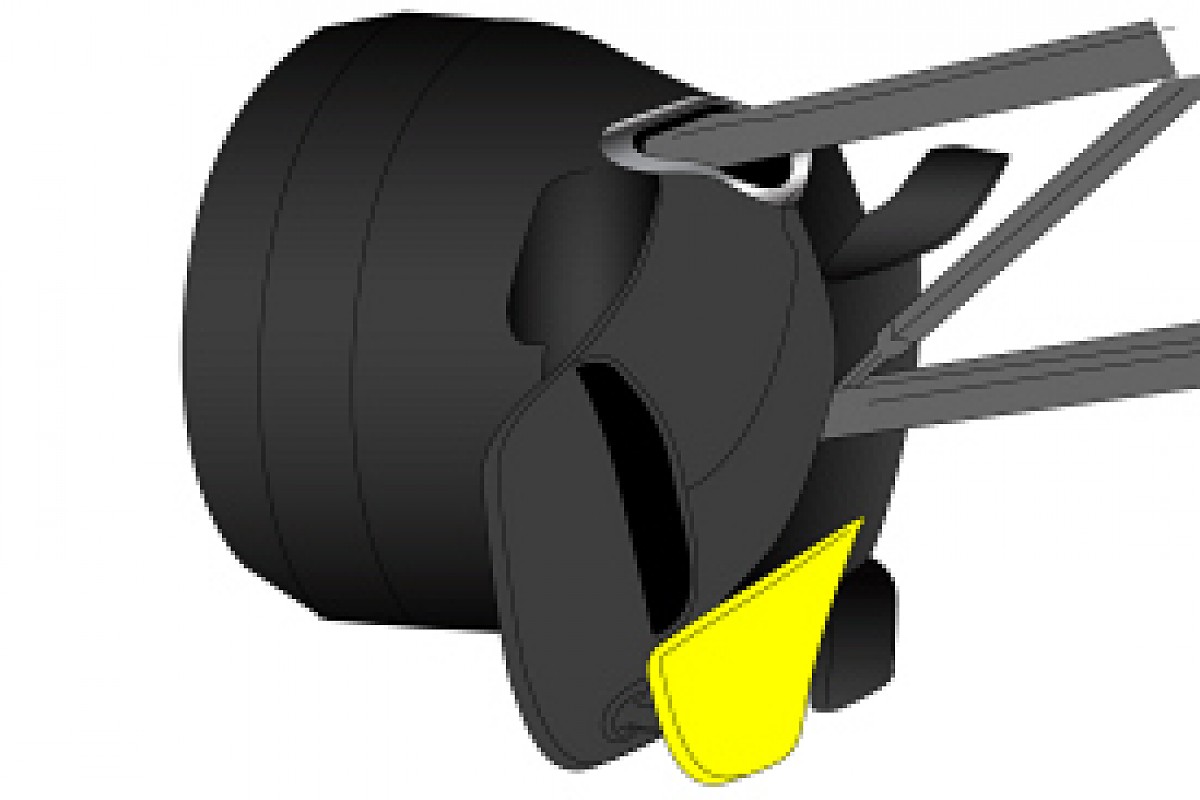 Toyota brought a series of detail improvements to both race weekends. Initially it gained a small turning vane added to the front brake ducts - similar to Renault's 2008 arrangement, the allowable area for bodywork inboard of the brake duct has been exploited.

Toyota has run the extended front brake duct since mid-season but now the vane has been mounted on a small strut to add downforce and send the airflow around the inside face of the wheel more effectively.

Just ahead of this part, Toyota revised the front wing for Japan. The inner tip of the cascade blended into the endplate was cropped and a simple fin added in replacement. 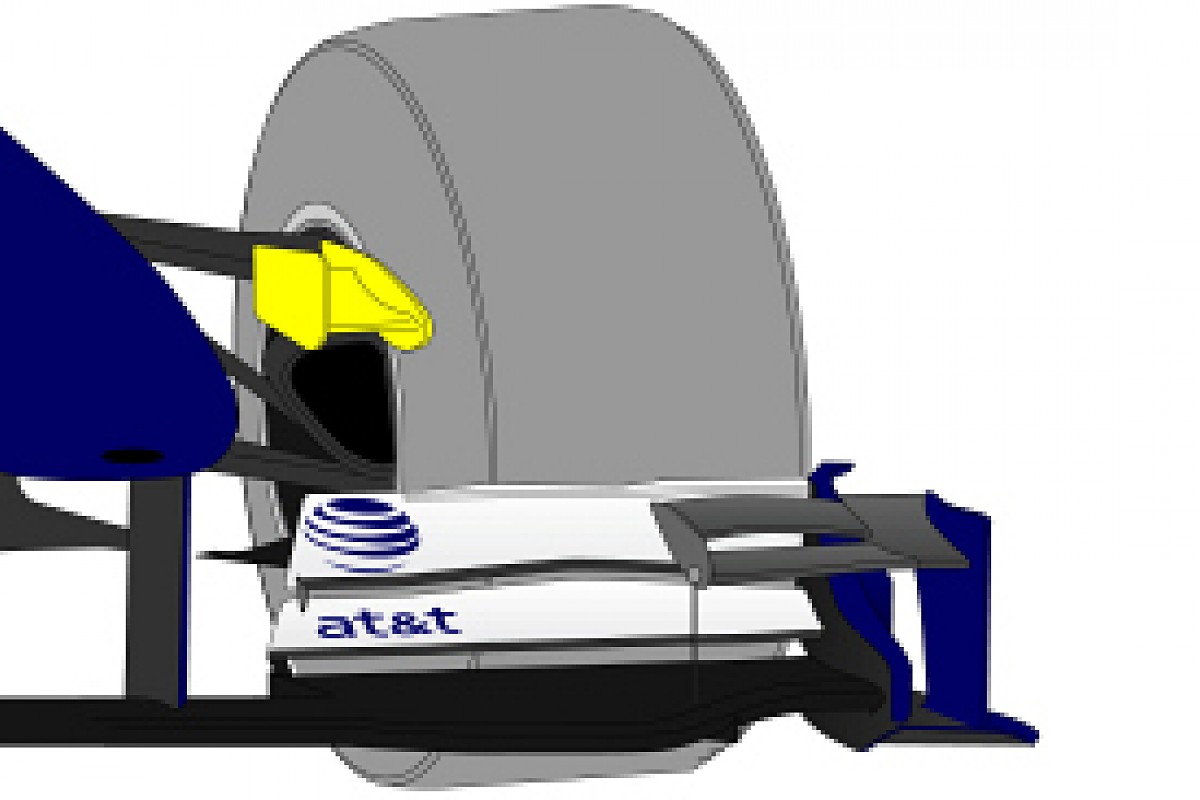 Williams brought new high-downforce front and rear wings to Singapore, and a new front brake duct to Japan. The wings are similar in philosophy to the previous versions, but the brake duct was a more radical departure. Following the lead of Renault and Toyota, a small winglet has been added to the inner brake duct.

This acts directly on the front tyres - which was illegal until recently. It sits in the box allowed for brake ducts, which permits any bodywork to sit 120mm inside the front wheel and reach forwards to the front perimeter of the tyre. Bodywork in this area is no longer to be purely from brake cooling - the same clarification that allows the outer wheel fairings, which have been banned for 2010.

In comparison to its peers, Red Bull's upgrades were more muted but no less effective. The team is pushing development to the end of the season through a revised front wing and a new diffuser, and introducing several parts that will carry through to the 2010 car.

In Singapore, a metal plate was fitted to the base of the carbon gearbox to prevent a repeat of the malfunction which afflicted Mark Webber in the 2008 race. The team believes that static electricity from buried tramlines caused the electro-hydraulic valves that switch the gears to operate autonomously.

The front wing used a narrower profile and created a large step to the edge of the endplate. With the current front wings being so powerful, teams can afford to reduce the plan area of the wing to improve airflow back along the car.

To offset the lost potential, Red Bull tried a more aggressive cascade wing in Japan. This sported three elements rather than the two used previously. At the rear, the diffuser was revised with a more distinct Brawn-like 'V' section in the middle. 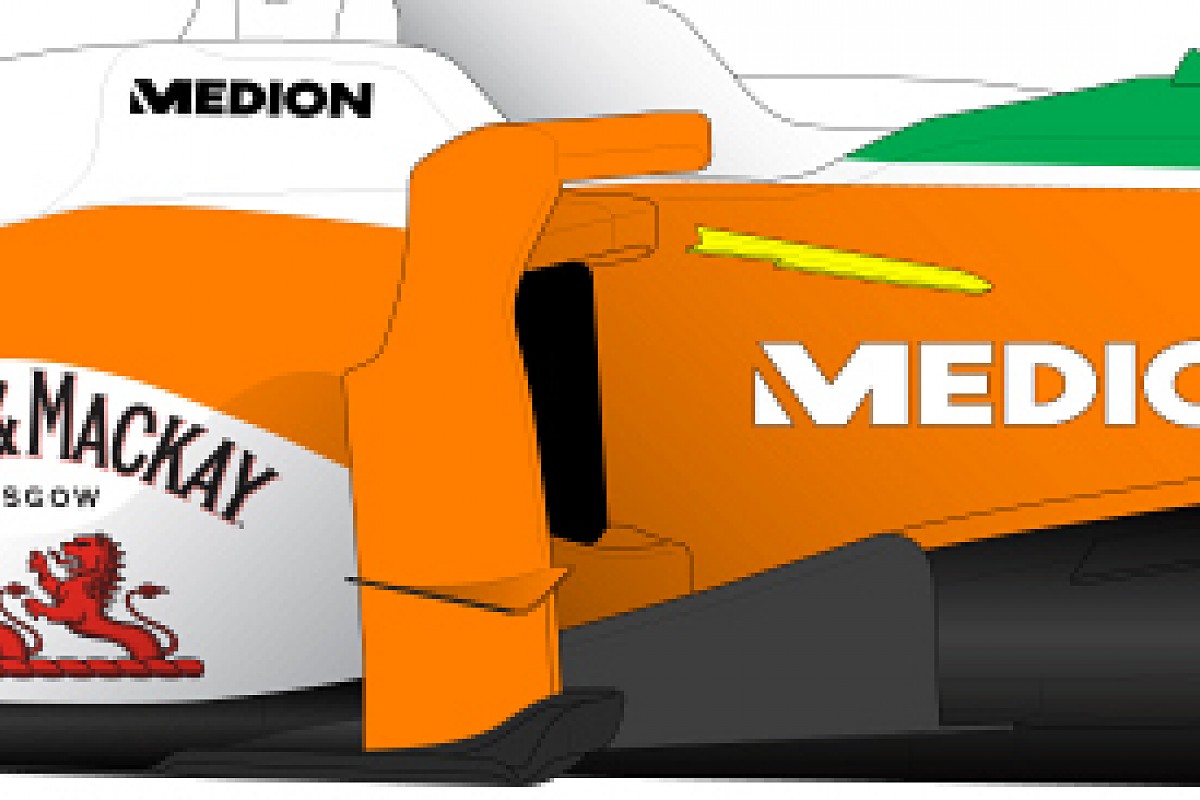 Force India continued its successful revisions with its alterations to the sidepods. The mirrors were re-sited to the pod wings and the vane-like mounting that the mirrors vacated was adapted to a simpler vortex generator. This, along with revised bargeboards, will improve airflow over the sidepods to the rear wing and diffuser.

The team briefly tried a Red Bull-like shark fin, which extended the engine cover all the way to the rear wing. Other changes included a large diffuser and rear wheel fairings with fins moulded into them to aid brake cooling. 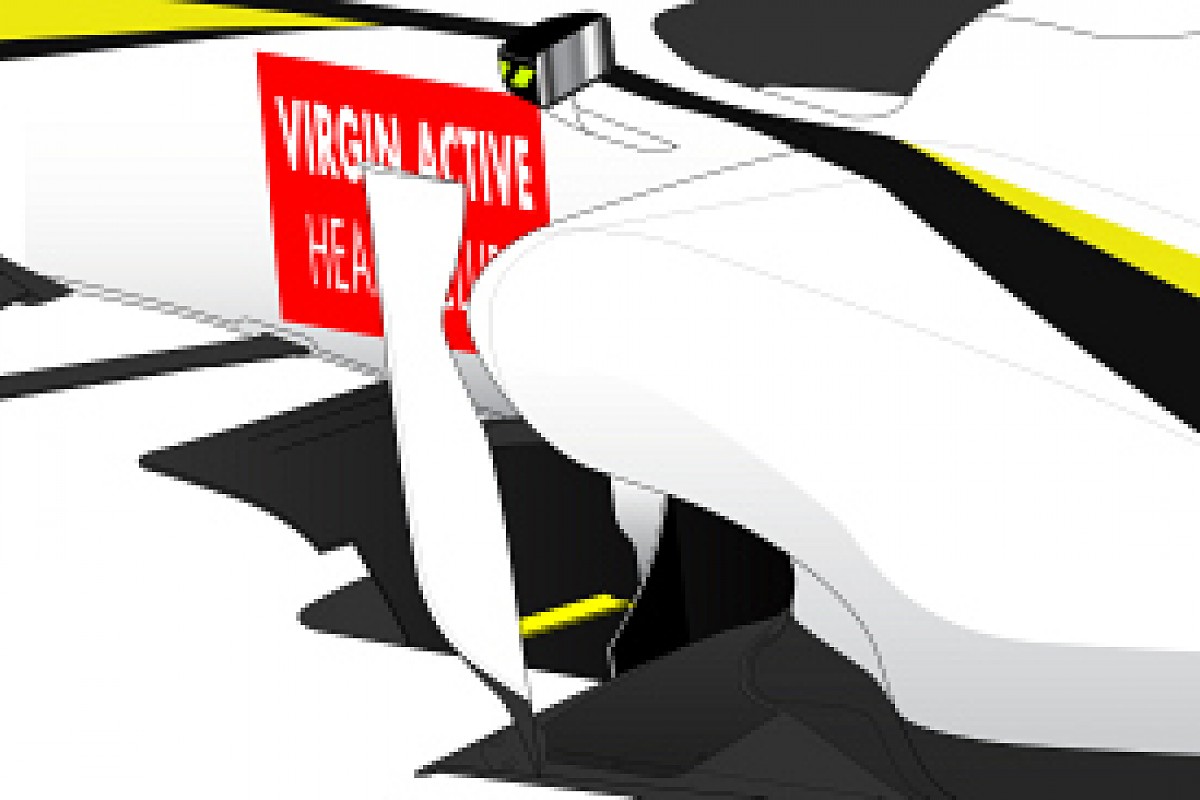 Brawn's developments were characteristically muted for both rounds, underlining the fact that the BGP001 has been the design lead for most areas on 2009 Formula 1 cars.

The diffuser featured a subtle geometry change and was aided by a revised beam wing with a twist to create a steeper section above the upper deck's exit, making the two interact to create more downforce. In a similar vein, the rear brake ducts gained complex new fins to aid airflow to the side of the diffuser.

Lastly, an inward pointing fin was added to the vane of the pod wings to further optimise airflow over the rear of the car.