Continuing on from the fast turns of Turkey, Formula 1 arrived at Silverstone last weekend for the British Grand Prix. Similarities between the two tracks are clear, fast turns mixed with a slow section ending the lap. But, despite the similarity of the tracks, the weather was distinctly cooler and mixed up the order due to problems with tyre temperature.

Silverstone was also the scene for a large number of technical updates. With the testing ban in place, teams are not bringing their new parts in one large step, but phasing the introduction of elements over several races.

Ferrari had major updates to the car for Britain, featuring a revised wheelbase, a lighter chassis and several smaller aerodynamic add-ons. The most significant change was the revised front suspension, which moved the front axle backwards to shift weight forward.

Ferrari continued to run KERS, which also aids the forwards weight bias that the tyres need. To alter the wheelbase, the wishbones have been redesigned to move the wheel backwards relative to its old position. This will have an effect on the aerodynamics as well as on static weight distribution. It's no surprise that the front wing also was revised with a new flap added to the rear of the endplate.

While making these changes, Ferrari also introduced a lighter chassis for Felipe Massa for the first time. At the rear, the brake ducts have been given Williams-like vanes to guide the airflow between the rear wheel and diffuser, plus a revised rear wing flap devoid of a gurney flap was raced for the first time.

Despite all these changes, and even though it appeared to be quick in the fast turns, Ferrari still struggled with low-speed mechanical grip on the front axle through the slow turns. Especially in qualifying the car could not hold a tight line through the Luffield complex. 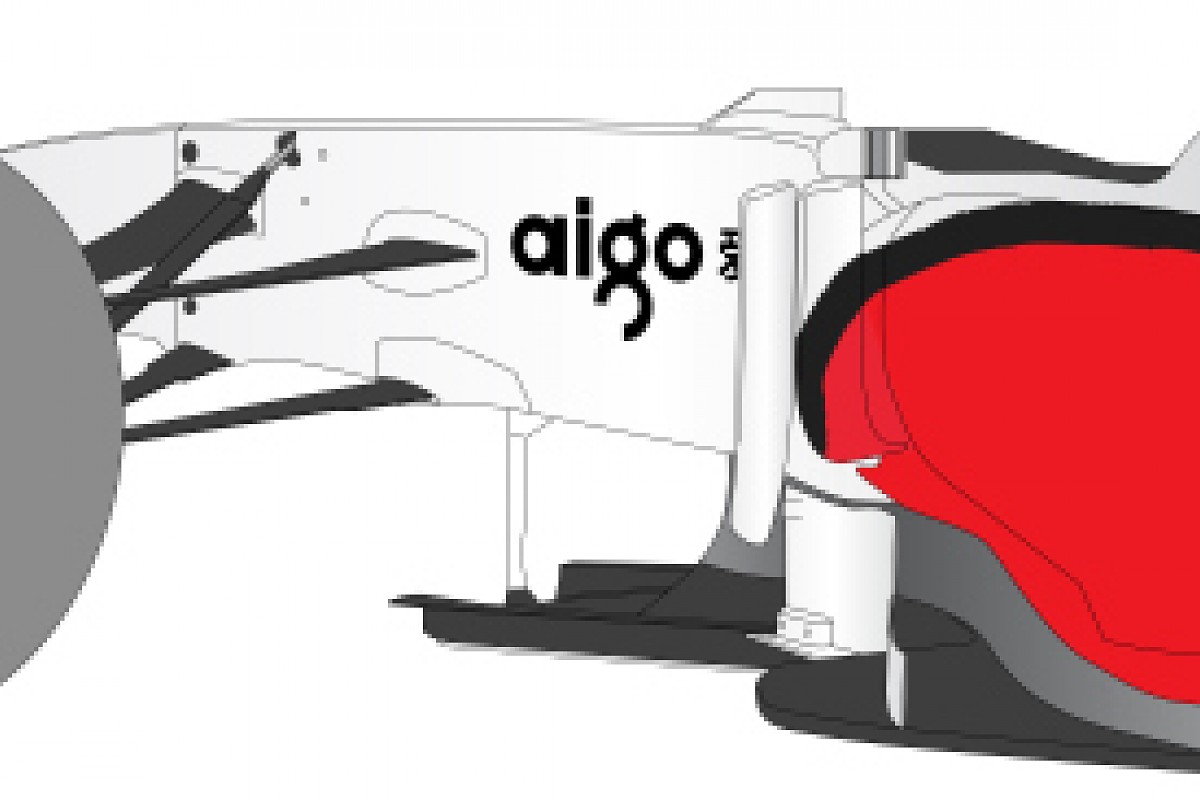 With Turkey having shown no promise for the team with the recalcitrant MP4-23, Silverstone also was another bad weekend for the team. To aid pace, Hamilton ran without KERS for the first time, but this appeared to bring no improvement in the car's abilities.

The team tried a mix of previously run components in Friday practice, with the newer diffuser mated to the beam wing that cranks up over the crash structure. While running these tests, the car was sprayed with more flow-viz fluid from the front wing endplates and trails could be seen where they exited the diffuser.

The only novelty on the car was a new pod wing set up that has an auditioning vane added ahead of the old pod wing, making a larger split set up, similar to Ferrari. 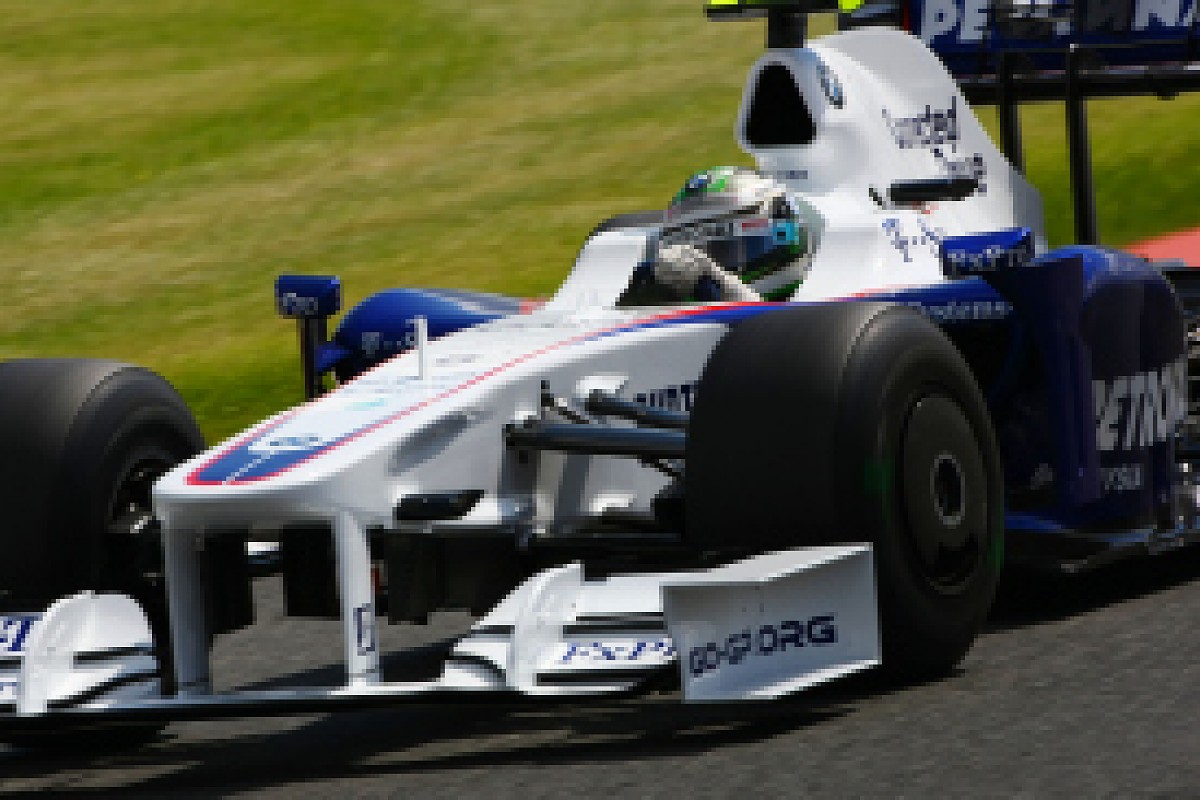 BMW's season does not appear to be gaining any momentum and the F1.09 will not now run KERS again while the team works on its deficient aerodynamics.

Smaller changes were evident around the front of the car in Britain, with new front wing endplates and alterations to the third pair of turning vanes under the car. The front wing endplates now feature a twist the vertical leading edge, but retain the aggressive twin horizontal edges to create a bucket like shape the end plate. 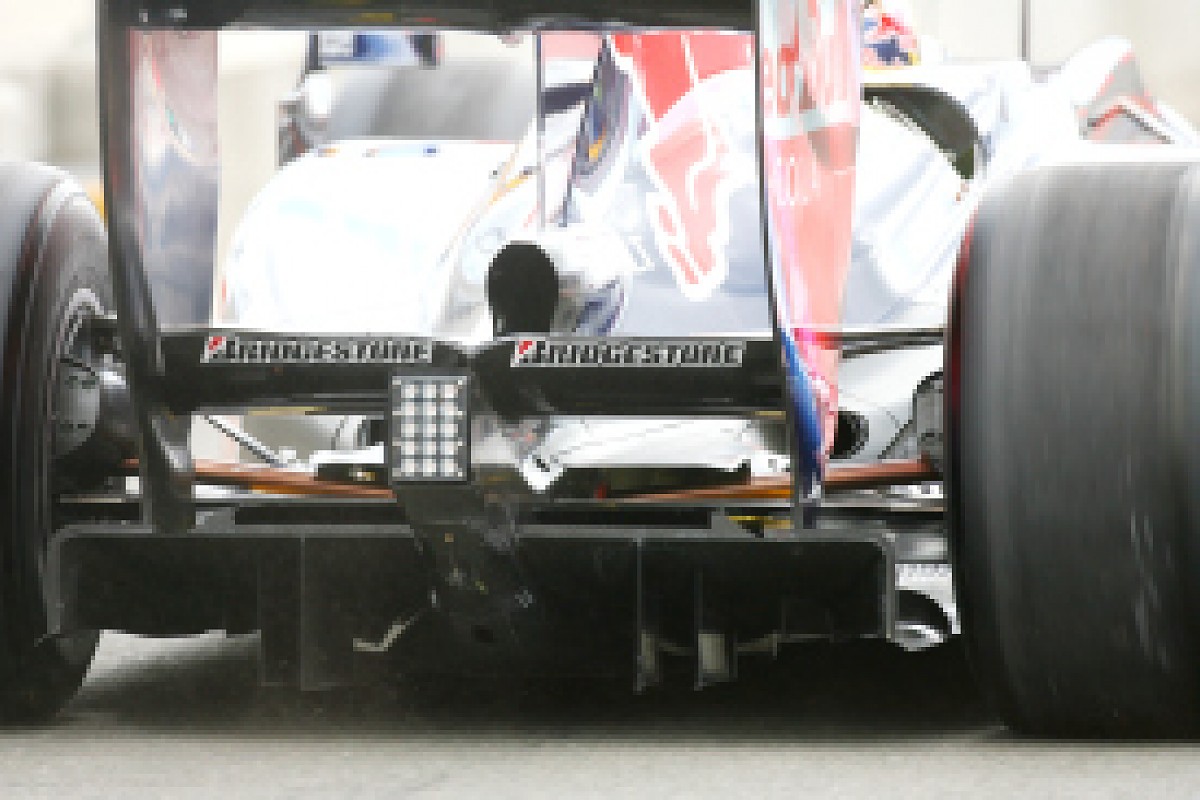 It's clear that Red Bull's strength is in faster corners where its aerodynamics come into their own. But the car is hard on its tyres and the cooler weather brought the them into the right operating window, not just in practice but also in the race.

The most significant factor could be the host of updates the team brought to the car this weekend. It featured a revised wheelbase, a new front end and a new rear end.
As with Ferrari, Red Bull moved the wheels relative to the chassis, by moving both wheels backwards the weight is shifted forwards. This has a major influence on aerodynamics and is part of the reason for the other revisions.

At the front the much publicised wider nose cone, with its strategically placed TV camera, was one change. But the front wing mounts also changed in order to move the wing relative to the repositioned front wheels. At the rear, the diffuser had a major update and now spans the maximum permitted width (1000mm), rather than being bounded by the narrower rear wing. To accomplish this, Adrian Newey raised the rear wing endplates to clear the diffuser, rather than leaving them Toyota-like in the airflow from the diffuser. As well as the main diffuser being wider, the double decker section above it was widened, creating yet more volume to increase downforce.

The engine cover was also revised with the open spine section used for cooling in recent races being replaced by a tubular outlet moulded into the tail of the cover. Lastly, the wing mirrors moved back to the pod wings rather than being fitted to their own stalks on the sidepods. 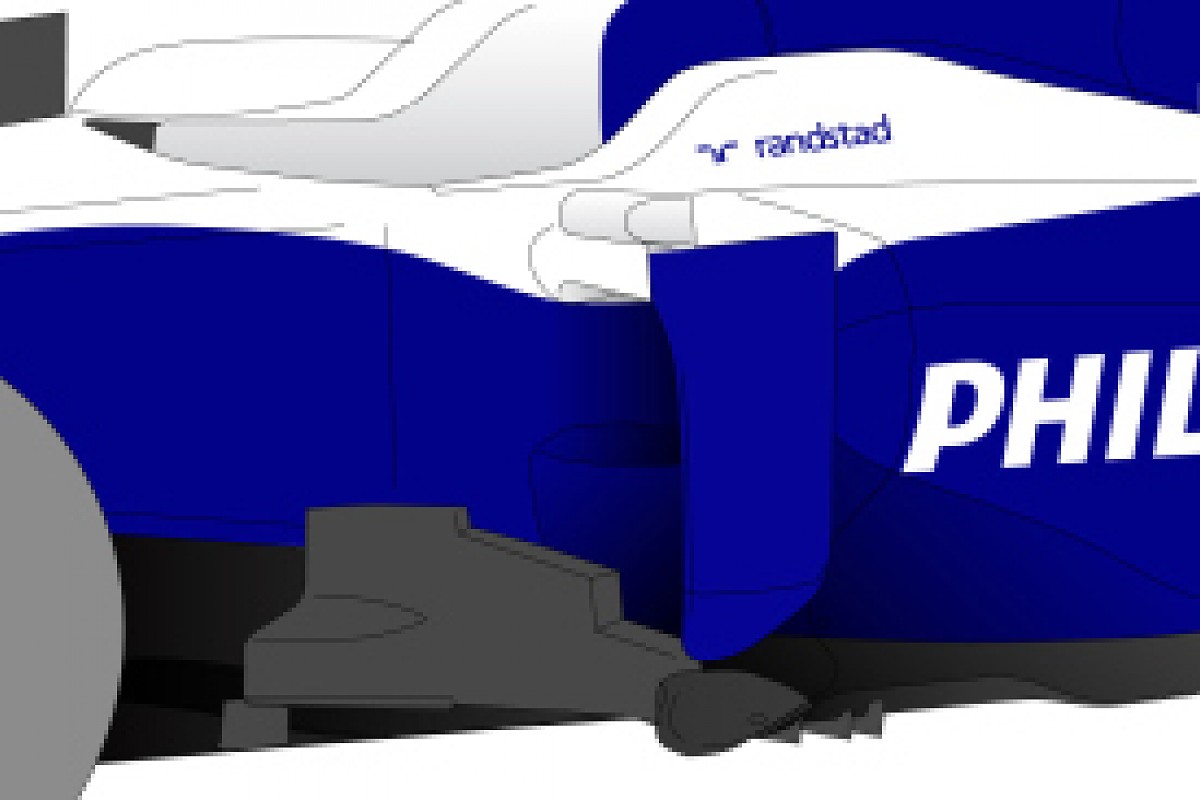 The recent aero changes, along with alterations to suspension set up, appear to be bringing the car back towards the front. For Silverstone, the car gained a new sidepod treatment that affected the bargeboard, pod wing and the axe head.

The bargeboard is larger and sports a stepped upper profile, while the pod wing no longer meets the floor and returns to the mirrors being mounted on it. Lastly, the curved shape under the axe head sports three small vanes to direct the flow out from under and over the top of the floor. 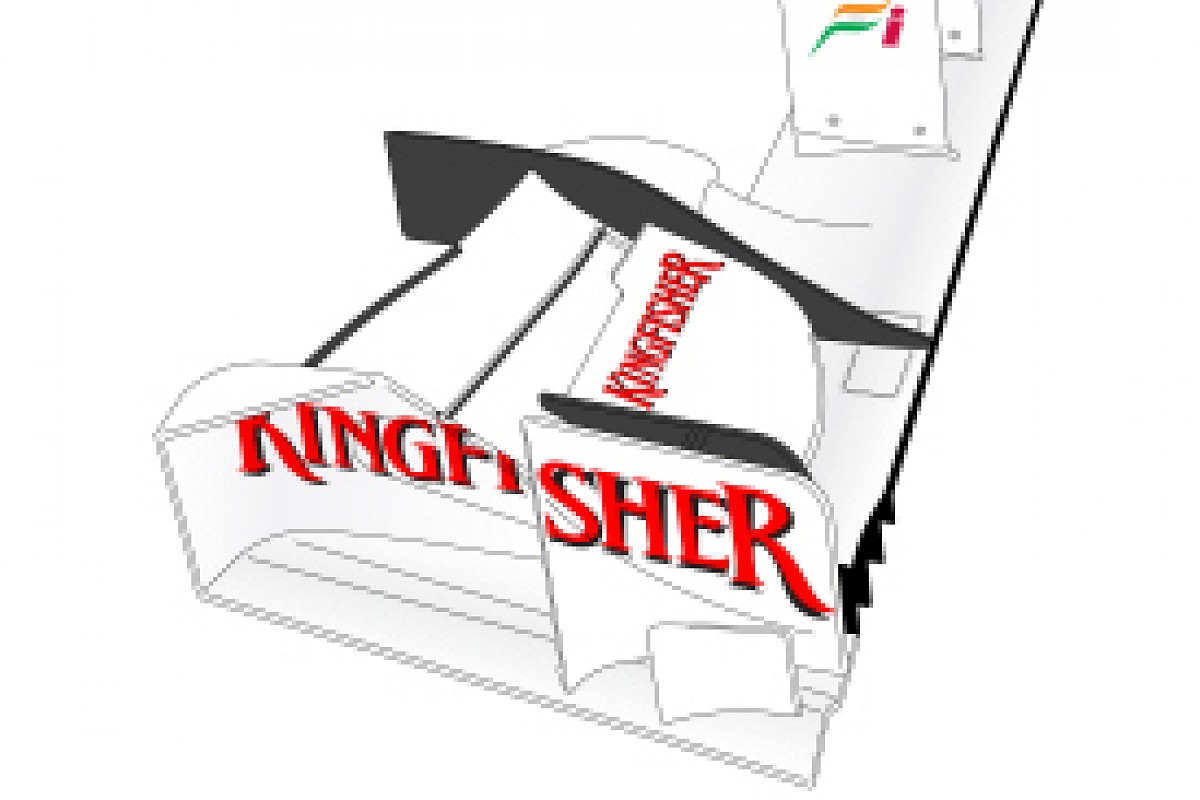 Force India's update for Silverstone consisted of a very different, Brawn-style, front wing. It has cut down endplates and a free standing winglet cascaded above it.

Along with this, the wing sported a different profile and as a result the front wishbone profiles have been altered with new fairings fitted along them. 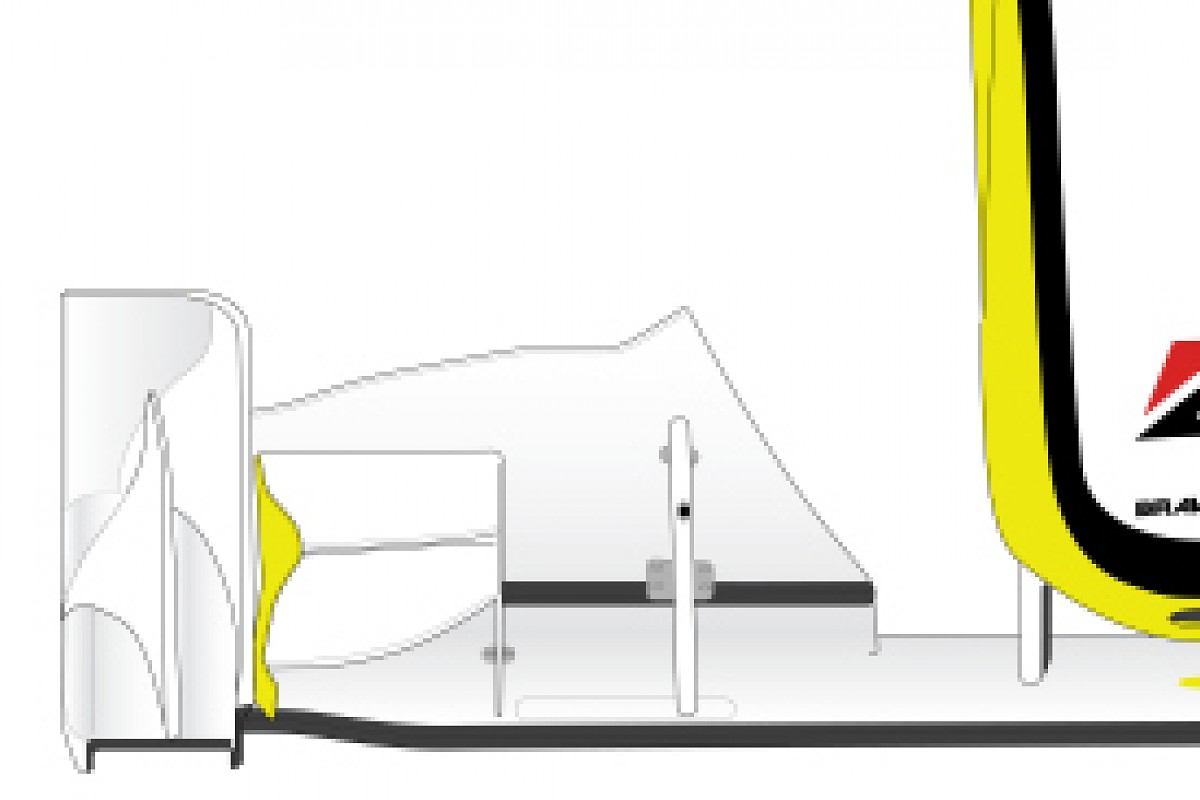 The team struggled the most with the cooler weather and resulting low tyre temperatures. Two developments were tried for Silverstone, firstly Red Bull-like humps added along the top of the monocoque were tried but discarded, plus a new front wing endplate was raced.

This new endplate features a wide, square-edged footplate, rather than the more conventional curved set up. The footplate acts both to seal the wing against the ground and direct the flow around the tyre.