The unique racing Esports series sees two-car LMP2 squads, one professional racing Esports driver and one real-world motorsport competitor, using iRacing, with each round is split into two heat races, before the top 15 cars from each combine for the finale Bonus Race.

For each event, tracks are voted for by fans on social media and car set-ups are fixed across the field, with the aim of creating close racing.

Kicking off the second season, the #70 Team Redline entry qualified on pole position, Enzo Bonito taking to the wheel first. Lining up alongside him on the front row was BS+ Competition’s Laurin Heinrich, the difference in times nearly two-tenths of a second.

As 31 identical Dallara P217 LMP2s exited the final corner in formation to start the race, the #93 of Raoul Hyman somehow ended up facing the wrong way, with several cars piling in behind before the 20-minute event had begun. 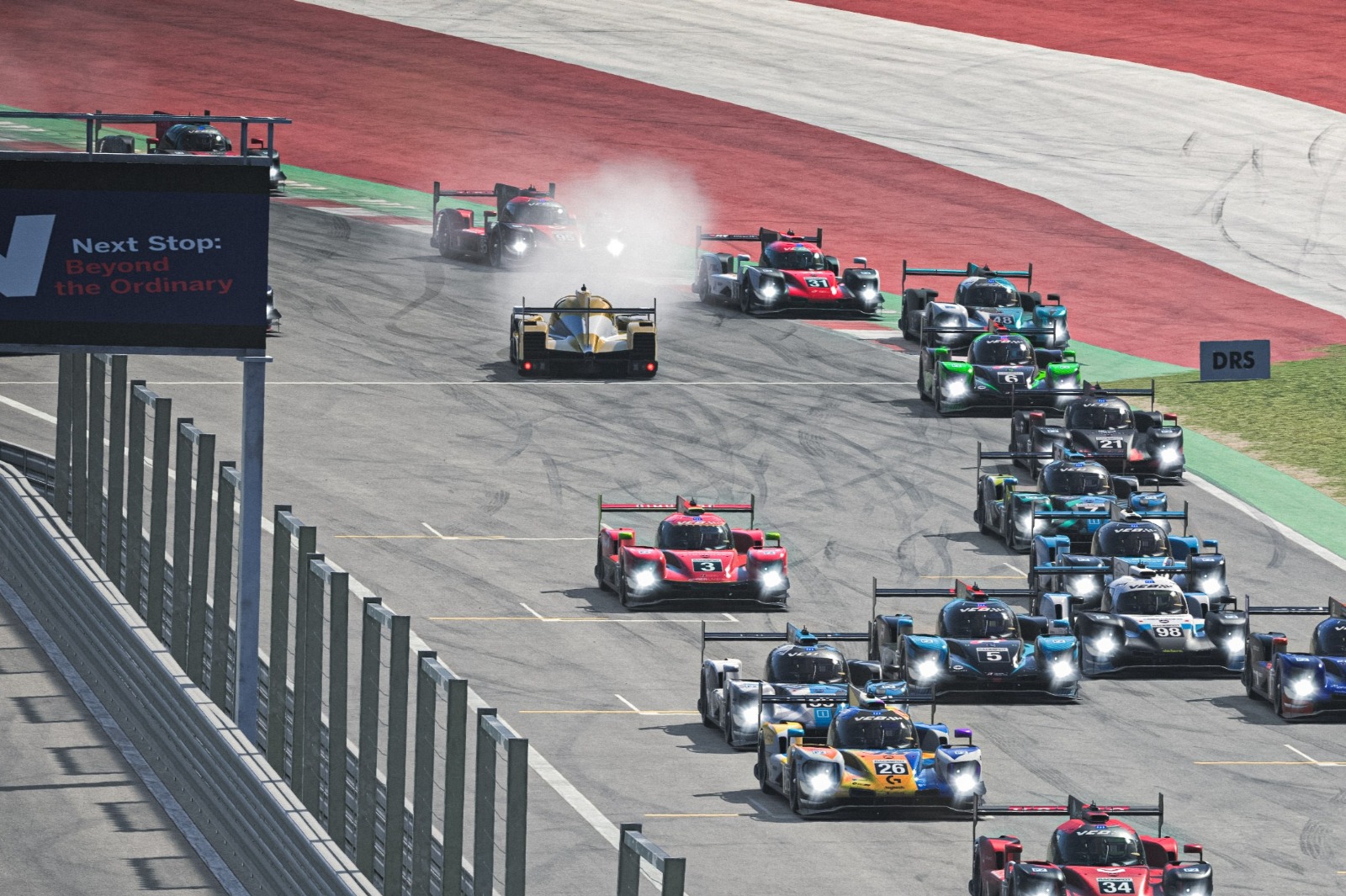 The field spread out as it crossed the startline, with yet more drama for some of the midfield through Turn 1. But, at the front, Bonito had a lead of over one second before the first lap had finished.

On the second lap, a fierce scrap between the #28 of Johnny Guindi and the #3 of Daniel Morad lasted for several corners but ultimately ended with Morad visiting the gravel. Guindi was also caught up in further contact the next lap, the next result being Robert Wickens spinning across the field at the exit of Turn 3 and into retirement.

With just under 10 minutes left on the clock, the pitlane filled up for the mandatory driver swap. One beneficiary was the #1 Team VRS entry. Fourth before the stops, Ayhancan Guven handed the car to Joshua Rogers who undercut the #73 Williams Esports Chillblast car for third, before snatching second from the #19 R8G Esports entry with a clean overtake. 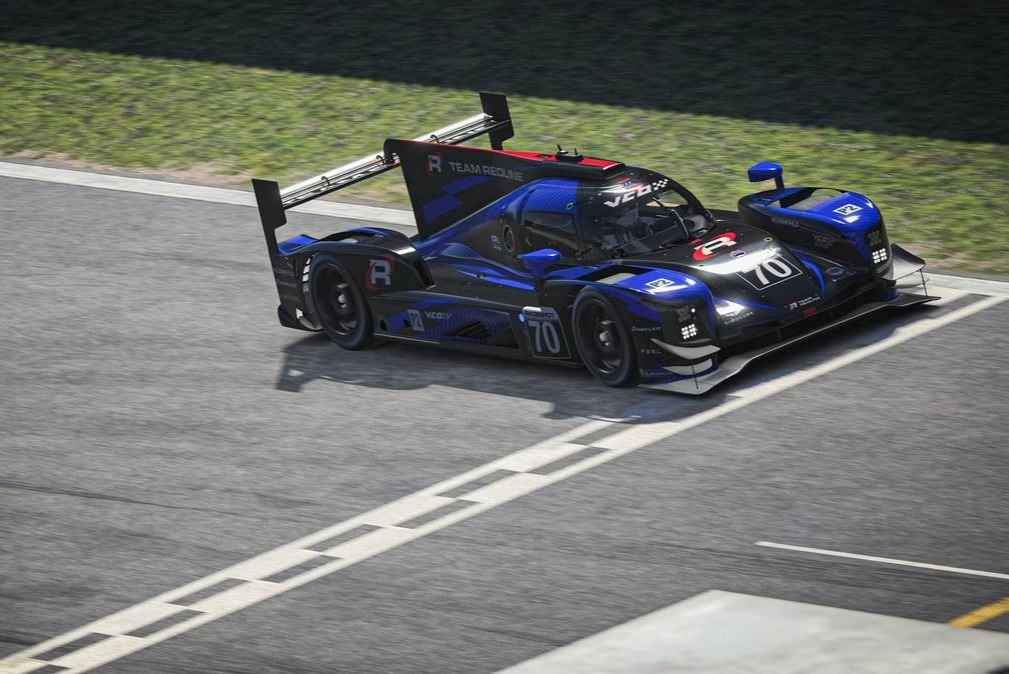 The leader waited until under seven minutes left to switch drivers, but the hard work had been done for Team Redline, with Gianni Vecchio cruising home in first, ahead of Rogers and Guven in second and Julien Soenen and Elliott Vayron in third.

After the excitement of Heat 1, Heat 2 was even more dramatic. Cooper Webster driving for the #97 Logitech G Altus Esports started from pole position, ahead of R8G Esports’ #888 Gustavo Ariel and WTCR race-winner Attila Tassi in the #56 Williams Esports BenQ car.

Down into Turn 1 after the green flag and Ariel lunged Webster for the lead in a decisive move. Behind, however, chaos reigned with several cars sideways, backwards, and for Elias Seppänen in the #58 BS+ Competition entry, upside down. 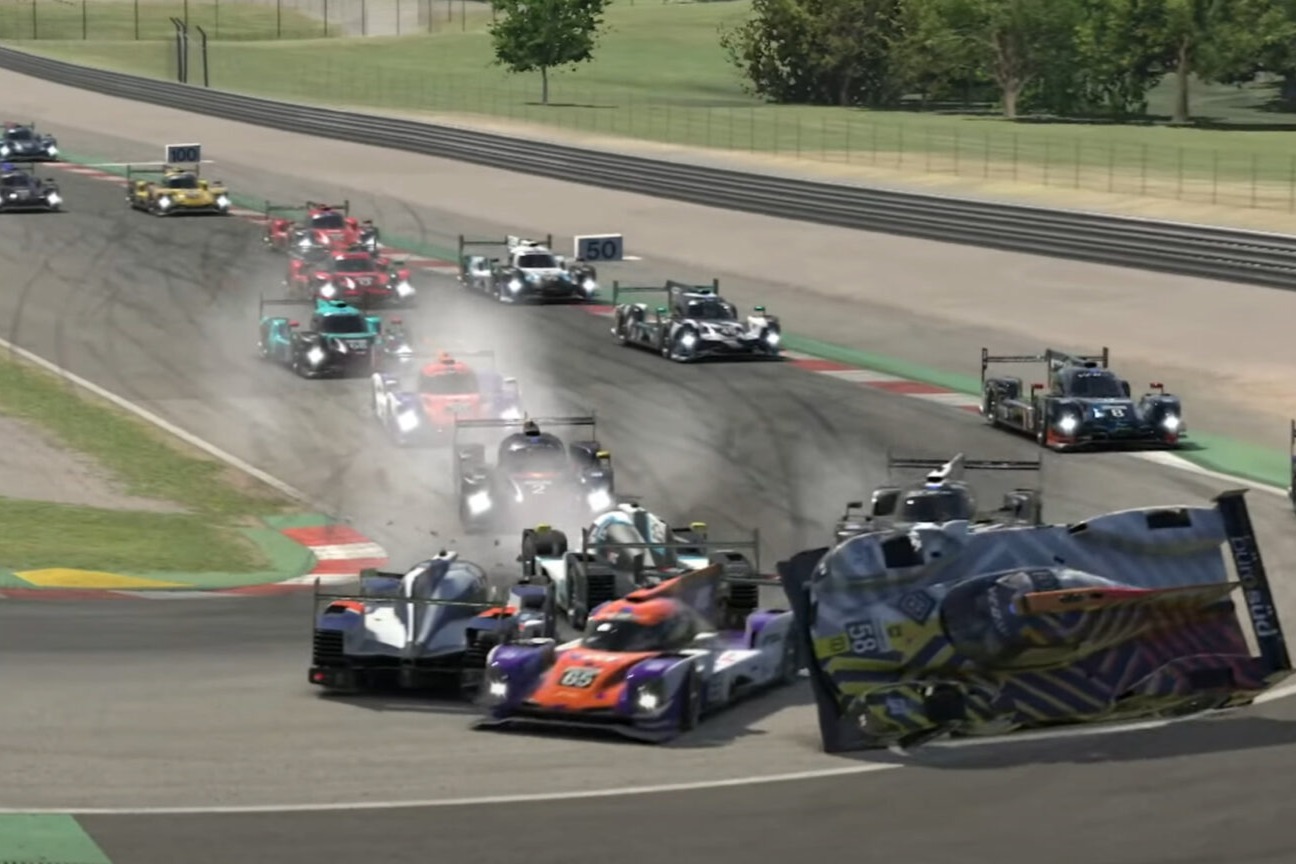 Upfront, Webster repaid the favour on Ariel to re-take the lead around the outside of Schlossgold. As the race settled down, Team Redline’s Chris Lulham made his way through the pack, first dispatching a slowing Ariel and then past Tassi.

Once again, as the clock struck 11 minutes into the race, a flood of pitstops happened for the required driver change. Webster entered the pits with a gap of 1.9 seconds over a charging Lulham. 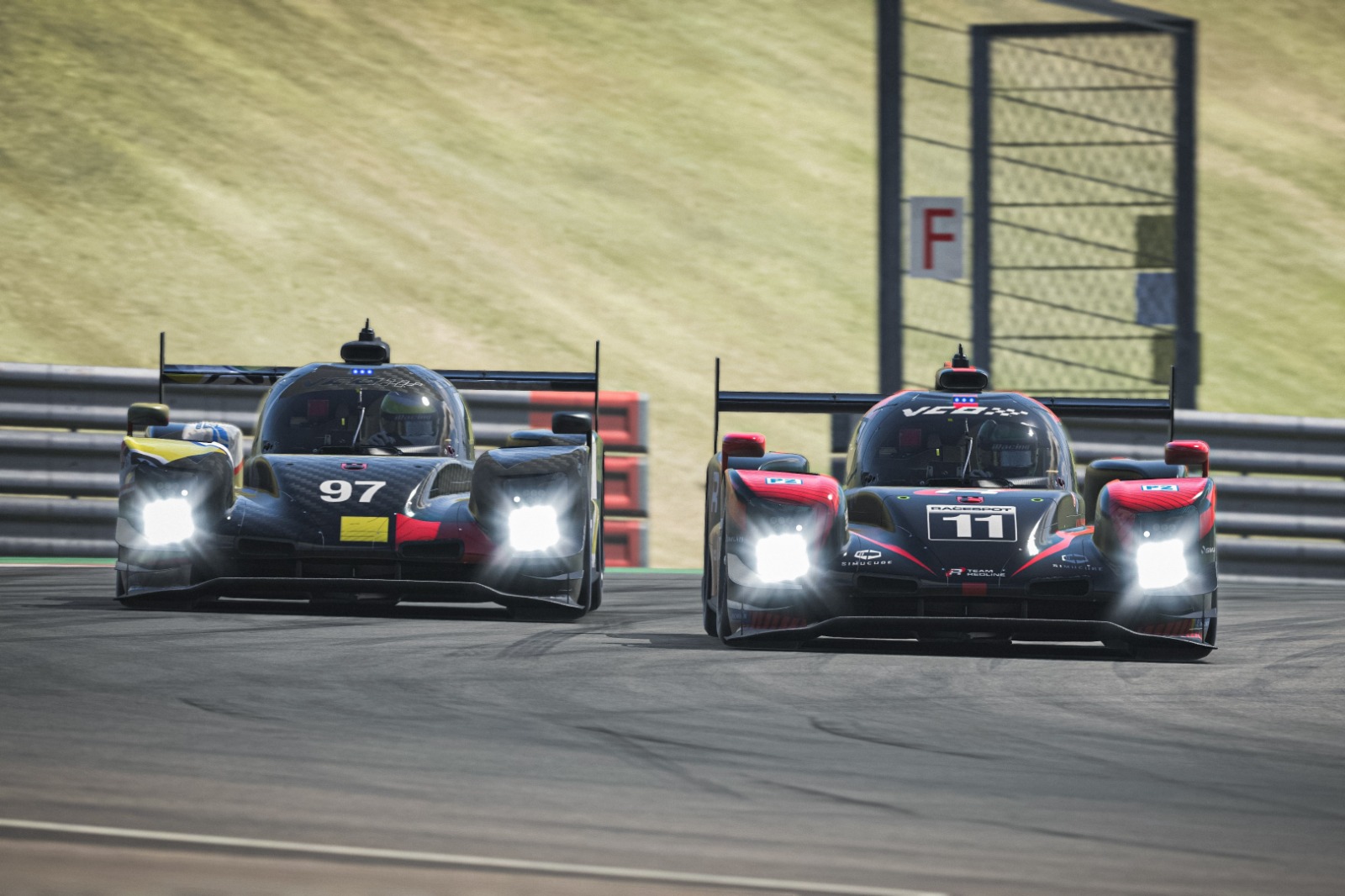 Simone Maria Marceno was now in control of the leading #97, but Maximilian Benecke was on the hunt having taken the reigns over from Lulham. With just two minutes left, the positions were reversed, Benecke sliding through at the Rauch corner.

With Team Redline in first and Logitech G Altus Esports in second, the #888 R8G Esports car of Ariel and Vlad Khimichev recovered to third.

With the top 15 of each heat now lining up for a 30-minute finale, in a curious twist, fans also voted for the two commentators – Lewis McGlade and Arjuna Kankipati winning that particular battle.

At the start, Benecke timed his launch perfectly to get the jump on the rest of the field, leading clearly into the first corner. After plenty of side-by-side action and some spins at the back of the pack, the race soon settled down into a rhythm – far more relaxed than the heat rounds. 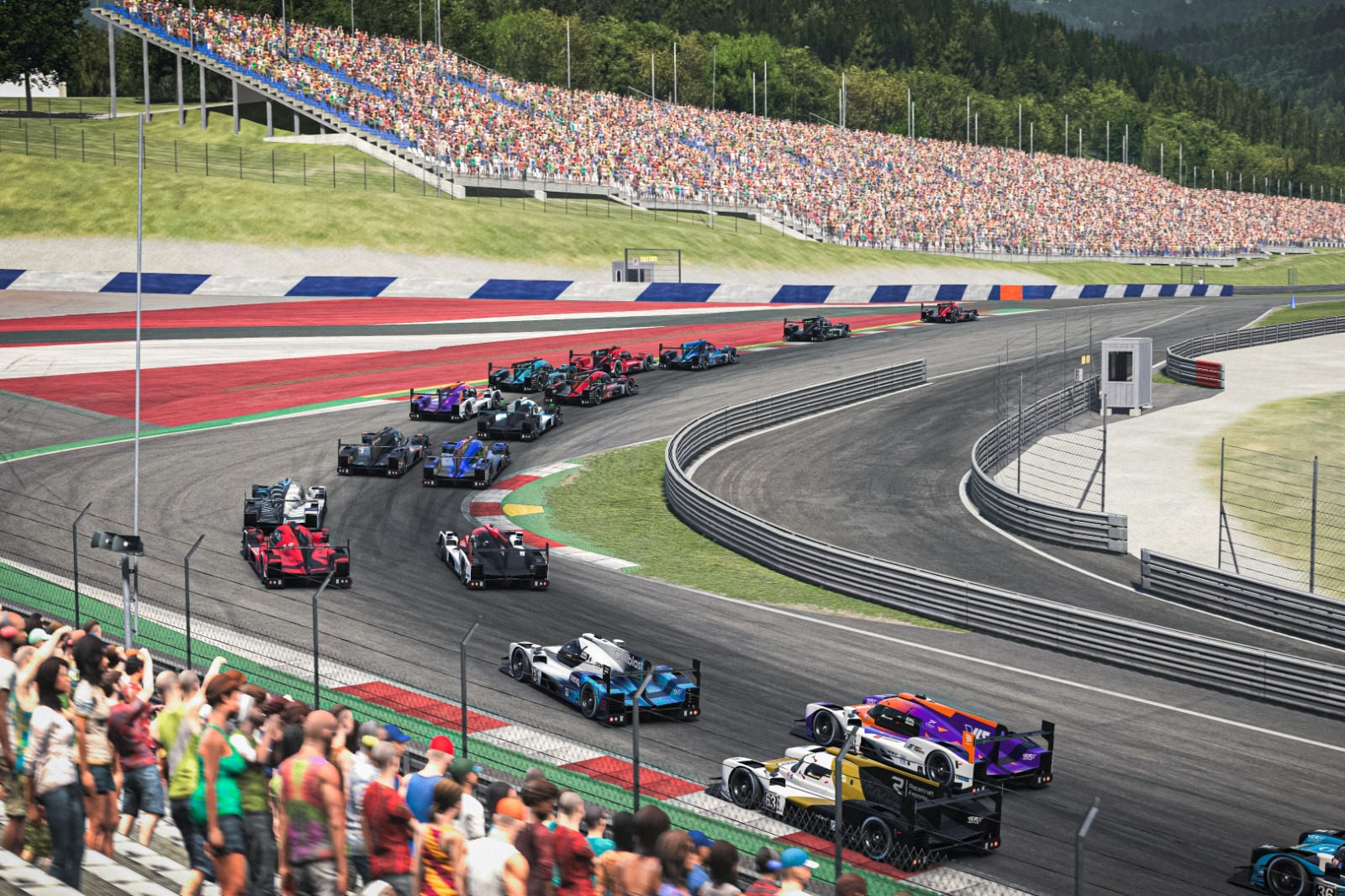 Disaster struck Gianni Vecchio in the Heat 1-winning #70 Redline entry early on, receiving a drivethrough penalty after an on-track incident at Turn 3, seemingly making contact with the #888 R8G Esports entry.

As the halfway mark approached, the focus was on several mid-grid scraps, but out front, Benecke remained just 1.8 seconds ahead of Julien Soenen for R8G Esports who in turn was just tenths ahead of Alejandro Sanchez for MSI Esports.

As second and third battled, Sanchez made his move around the outside of Turn 4 with 18 minutes completed. Moments later, the top five all pitted at the same time, with Soenen tapping the rear of Sanchez as they braked for the pit entry control line. 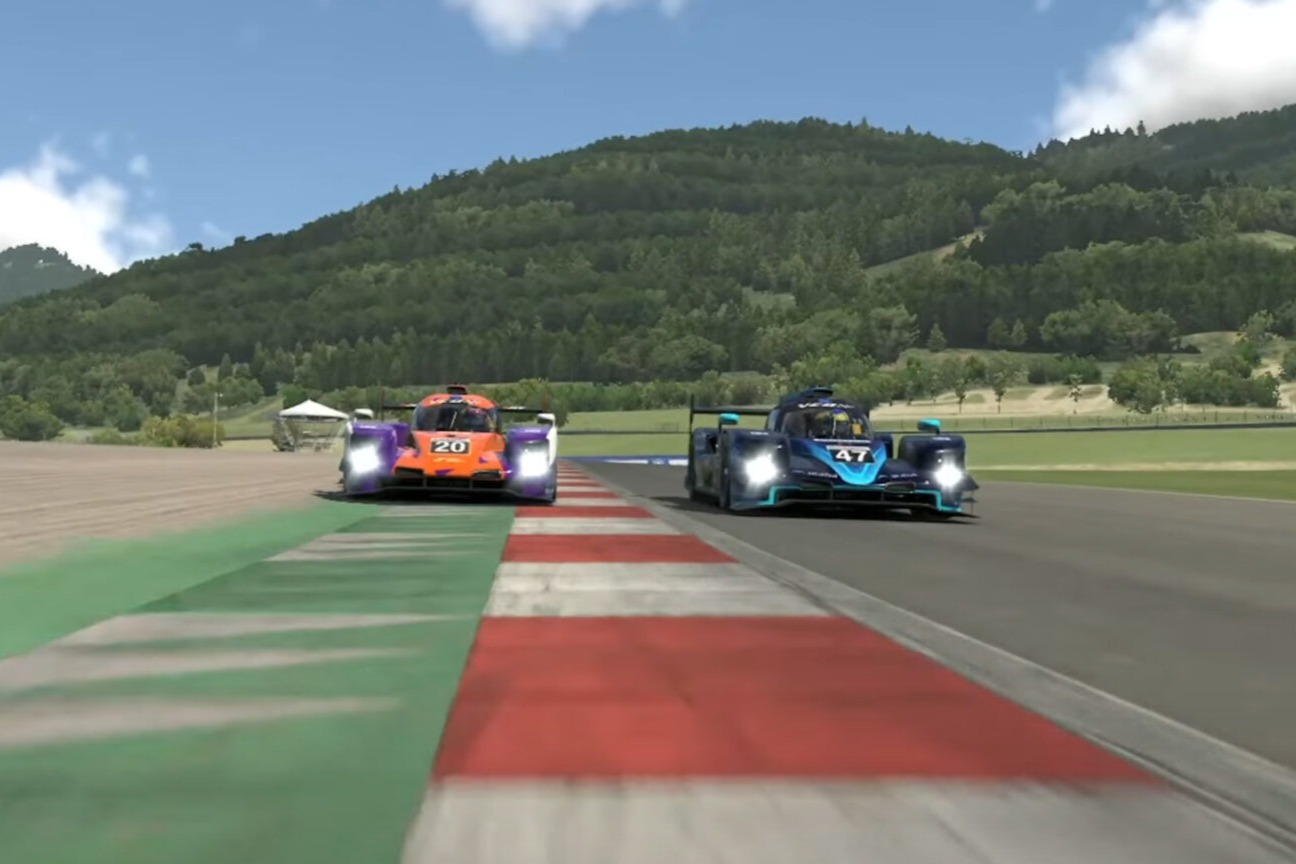 Once the drivers had been swapped, Team Redline still led the way with Lulham at the helm, now nearly four seconds clear of the duelling R8G and MSI entrants, both of whom were still running nose to tail. Elliott Vayron had taken Romain Grosjean’s squad back up to second, but MSI’s Ryan Wood was not letting him pull away and former Global Rallycross competitor Mitchell deJong entered the fray in fourth.

In the end, Lulham crossed the line first for Team Redline and the car-sharing Benecke, ahead of Soenen and Vayron in second and deJong and Charlie Collins rounding out the podium. 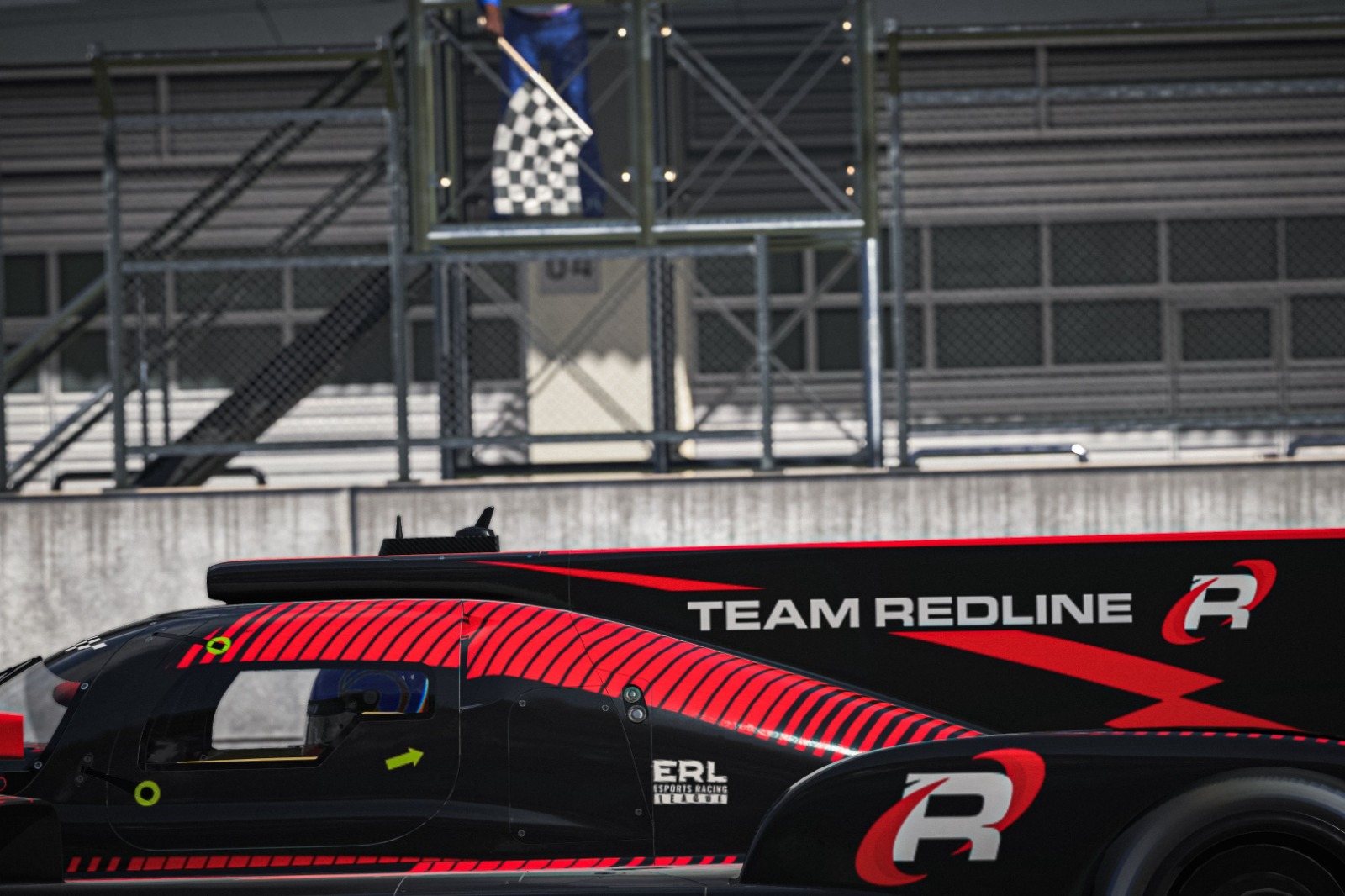 “If you get caught up in the turmoil at the start, you’ve hardly got a chance. Starting from pole position in the ‘Bonus Race’ was almost the simplest part of the evening. Chris also did a perfect job. I am happy that we were able to score maximum points.”

There are four rounds this season, and the next will be on 9th November, broadcast live on the VCO YouTube and Twitch channels.