Al-Attiyah claimed his third Dakar triumph in his Toyota Hilux by 46 minutes over his nearest rival, X-raid Mini's Nani Roma, marking the first time Toyota has ever won the event.

It follows Al-Attiyah's previous successes with the factory Volkswagen team in 2011 and with the X-raid squad in '15.

Toyota's Dakar effort is not a full manufacturer outfit, despite running under the same Gazoo Racing banner used for the marque's other efforts that include its World Endurance and World Rally championship operations.

Al-Attiyah is hopeful the South Africa-based team, which also ran Giniel de Villiers and Bernhard ten Brinke this year, will get more support from the parent company as a result of his win.

"It was my dream to win [the Dakar] a third time," said Al-Attiyah. "We also gave the win for Toyota for the first time in their history. I'm sure Toyota Japan is proud of this.

"Now we [have] put Toyota in first place, I am sure we are coming for the next three, four years very strong," Al-Attiyah said.

"But I am sure Toyota will now come with an official team for Dakar." 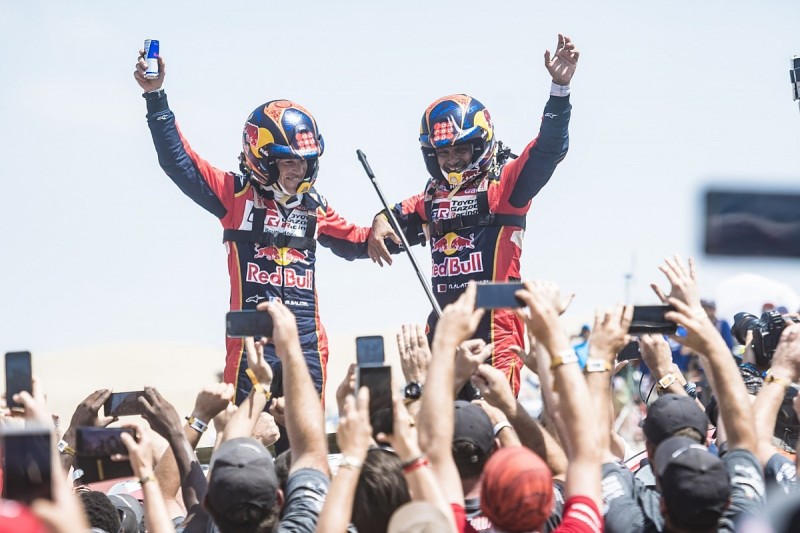 In the Dakar, Al-Attiyah never relinquished the overall lead after the third stage, as challenges from X-raid men Stephane Peterhansel and Carlos Sainz, as well as Peugeot privateer Sebastien Loeb, fell apart.

De Villiers also led after the second stage before being forced out of contention when he hit a rock on stage three, meaning a Toyota driver led overall after every stage of the rally.

Gazoo Racing SA team principal Glyn Hall, who said prior to the event that this year's Dakar was a "must-win" event for his team in the wake of Peugeot's withdrawal as a factory squad, hailed his team's "perfect job".

"We have been 100 percent reliable with Nasser, absolutely zero problems," Hall told Autosport.

"When you have a car that has no trouble and a driver that is really focused on winning the rally and does not care if he does not win the stage, then we have a perfect situation."