Jessica Hawkins will return to the British Touring Car Championship with Motorbase Performance as a stand-in for regular driver Andy Neate at Snetterton.

Hawkins has been drafted in to pilot one of the team’s four Ford Focus ST cars after Neate elected to sit out the second round of the championship at the Norfolk circuit (12-13 June) due to personal reasons.

The decision comes after Neate was at the centre of a dramatic opening round at Thruxton that saw him trigger a wild first corner crash at the start of race two, that included Team Hard’s Glynn Geddie, who suffered significant damage, and BTC Racing’s Jade Edwards.

With his seat available, Neate contacted Hawkins to offer the W-Series racer the drive, which will mark her second BTCC appearance, having contested last year’s Snetterton meeting for Power Maxed Racing.

“Having known Andy and his family for a good few years, I received a call from him last week asking if I was available on the weekend of the next round of the BTCC,” said Hawkins, who recently became a driver ambassador at the Aston Martin Formula 1 team.

“Whilst I thought it was little out of the ordinary for him to be asking, I did not expect his response to be 'I would quite like to sit Snetterton out, and I’d really like to put you in the car'.

“Obviously, he didn’t need to ask twice. Shocked and speechless at the time, I am humbled to be on the receiving end of Andy’s generosity - I’ll do my best to make the Neate’s and the team at Motorbase proud.” 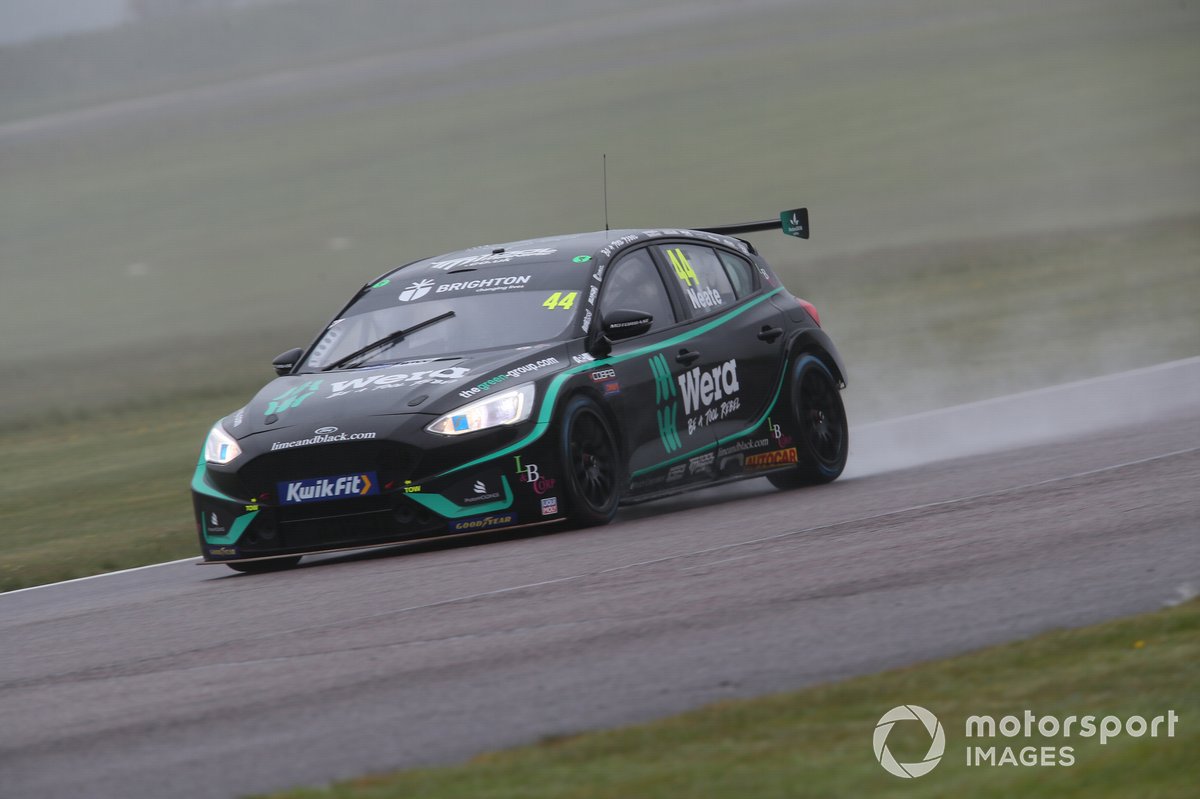 Meanwhile, Neate says he will take the time out to “regroup” before returning to the BTCC to contest the remaining rounds of the championship, beginning at Brands Hatch Indy on 26-27 June.

“Following on from what can only be described as a bitterly disappointing season opener at Thruxton, and more pertinently the aftermath that has followed; I have personally taken the decision to take a short sabbatical from the BTCC at Snetterton,” said Neate.

“However in avoidance of any doubt, I will be returning behind the wheel of the Motorbase Ford Focus at Brands in June.

“I will take this time to regroup and remind myself of my confidence and extremely competitive pre-season testing we have demonstrated, I’m really looking forward to Brands Hatch.”

Team principal Pete Osborne added: “Obviously losing Andy for a round of the championship this season wasn’t part of the plan and the decision has not been taken lightly.

“We totally understand and respect Andy’s position. It has been a difficult decision to take a break and get himself in a position to fulfil his own potential but I’m 100% certain that it’s the right one.

“I can’t think of a better replacement for Snetterton than Jessica and I admire Andy for choosing to give her the chance to show the BTCC what she can achieve. It goes without saying, we will be giving both Jessica and Andy our full support.”