The Scot, who took three victories in Mercedes machinery in 2017-18, led all the way at the North Yorkshire circuit in his Laser Tools Racing Infiniti Q50, but faced a tough task defending from Hill.

While Moffat had no success ballast, Hill was carrying 48kg aboard his Motorbase-run MB Motorsport Ford Focus, but that didn’t stop him constantly probing over the first two thirds of the race.

On a slightly damp track following a smattering of pre-race drizzle, Moffat managed to hold on while the rear-driven Infiniti switched its tyres on, although he was notably slower than the chasing front-wheel-drive Ford through Sunny and Hawthorns.

But every time Hill got close enough to mount an attack – feinting to the outside at Tower or nudging the Infiniti’s rear bumper – Moffat was able to use his traction to rebuff the challenge. With a few laps remaining, he was able to pull away slightly, although still had to defend at the hairpin on the final lap before winning by 0.520 seconds.

“I knew Jake was going to be quick – he’s been quick in that Focus all season,” said Moffat.

“Sunny In and Sunny Out was where I struggled, and I had to defend hard into the complex and get the drive off the corners.

“I had to think hard about that one, but the guys gave me a brilliant car and that makes your job a hell of a lot easier.”

Such was the battle at the front that Senna Proctor – who used the extra bite of the soft option tyre on his BTC Racing Honda Civic Type R to get past Colin Turkington on the opening lap – and four-time champion Turkington’s West Surrey Racing-run BMW 330i M Sport were able to latch on to make it a four-car train. 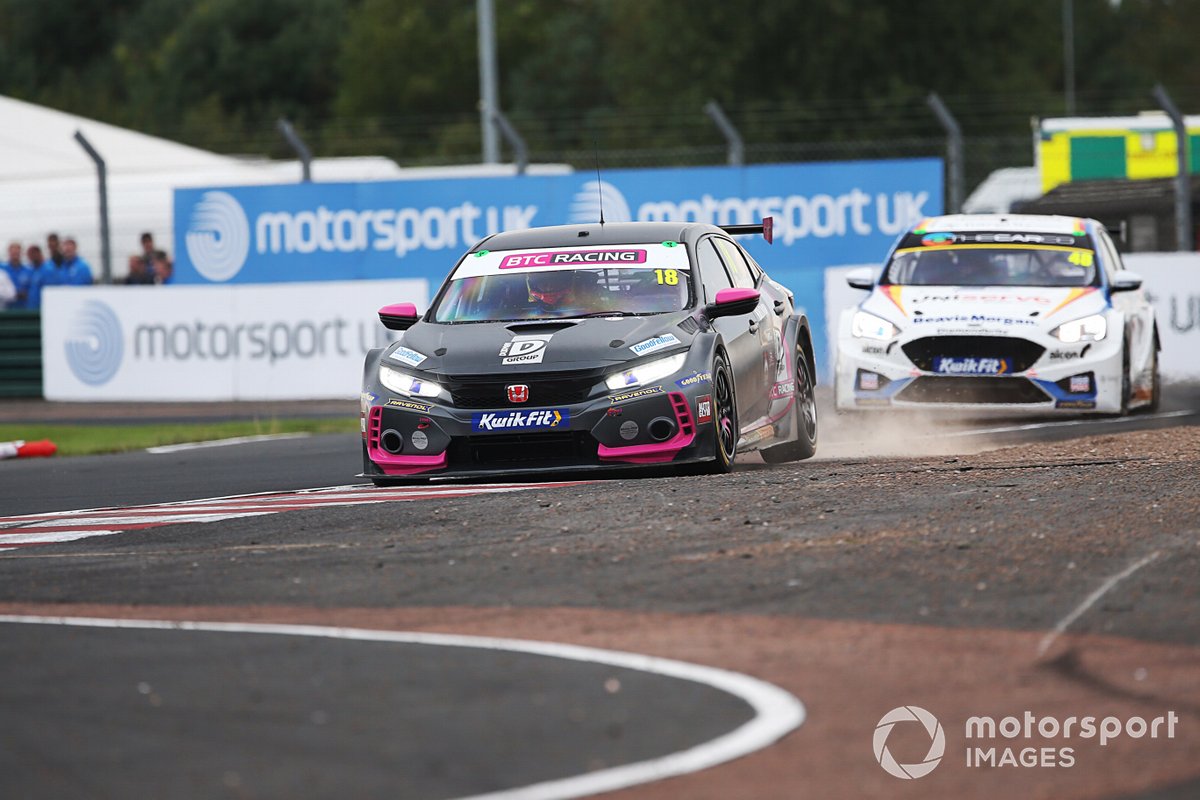 But that excitement was broken up somewhat by the appearance of the safety car.

Chris Smiley, Ollie Jackson and Dan Rowbottom had got together at the hairpin as they battled for eighth, ending Jackson’s race and sending Rowbottom onto the grass.

On the following lap, Rowbottom’s Team Dynamics Honda was nerfed off at the complex by rear contact from Aron Taylor-Smith’s Team Hard Cupra, and slithered across the damp grass until nosing into the barrier.

After the restart, Proctor (9kg of success ballast) wasn’t the threat he had been to Hill, but was able to hold off Turkington (39kg).

Proctor’s team-mate Josh Cook, on 57kg on his BTC Honda, was another on the soft tyre. He passed Adam Morgan for fifth on lap three, with Ash Sutton following him past, and then Cook set fastest lap as he closed on the leading quartet before the safety car.

Morgan’s Ciceley Motorsport BMW (33kg ballast) lost seventh when Chris Smiley barged past at Tower in his Excelr8 Motorsport Hyundai i30 N with four and a half laps remaining.

Completing the top 10 were Dan Lloyd’s Power Maxed Racing Vauxhall Astra and Gordon Shedden’s Dynamics Honda, up from 17th on the grid.

Stephen Jelley (WSR BMW) was running ninth before an audacious move from Lloyd from Tower to the Jim Clark Esses resulted in Jelley subsequently losing further places to 13th.

Tom Ingram progressed from 21st to 12th in his Excelr8 Hyundai, while Rory Butcher, who started his Speedworks-run Toyota Corolla from the rear following his qualifying engine failure, could only make it to 19th on the soft tyre.