The Italian was made to sweat for the result after dropping from the outside of the front row to third place away from the lights.

After sustained pressure, former GP2 racer Giovesi was harried into a minor mistake on the approach to Coppice on lap eight. The Ghinzani driver locked-up when on a defensive inside line, ran wide on the exit and allowed Ghirelli to grab second into the Esses.

The pair ran Kumho-to-Kumho through the following Melbourne Hairpin, before Ghirelli established himself in the position and settled down to attack Karthikeyan's 2.5-second lead.

Worsening graining on Karthikeyan's tyres assisted Ghirelli's chase, and the problems prompted the Super Nova pitwall to call Karthikeyan in for a premature pitstop on lap 14.

The decision was also influenced by the searing pace of erstwhile series leader Kimiya Sato. After being bogged down in seventh in the early laps, Sato made an early tyre change and set a series of new Auto GP lap records on his release.

Title protagonist Sergio Campana was promoted to third by Karthikeyan's departure from the front of the field, while Giovesi's Ghinzani team-mate Robert Visoiu held fourth from Daniel de Jong.

A serious blow to Sato's title challenge occurred on lap 17. Having fought past Visoiu, the German Formula 3 graduate appeared to approach McLean's with excess speed and spun off into the gravel. 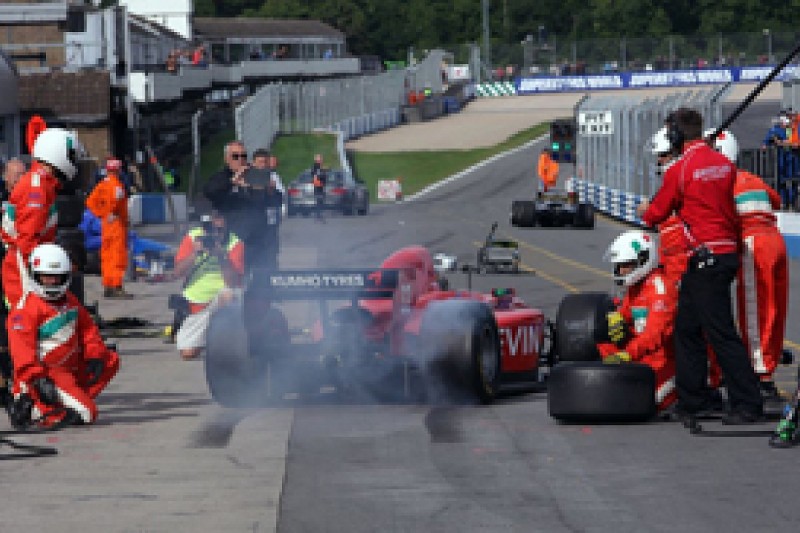 Ghirelli and Giovesi ran in close formation until two laps from home, when both crews called their men in for mandatory tyre changes.

Giovesi suffered a delay during his stop for fresh fronts, and rejoined the road behind a recovering Karthikeyan.

The Super Nova duo took the chequered flag separated by less than half a second. The result is a repeat of the Norfolk team's Auto GP one-two on its last visit to Donington two years ago.

Visoiu survived his battle with Sato to take fourth, from Campana, who remains second in the standings, and Daniel de Jong.