An inspired Kimiya Sato did everything he could to claim the Auto GP title by winning the season finale at Brno, but could not stop third-placed Vittorio Ghirelli becoming champion

Sato's fifth victory of the season provides the Japanese racer the consolation of sharing the year's top win tally with Narain Karthikeyan.

But the Euronova Racing man would fall seven points short of Ghirelli (pictured top) in the final standings.

Brno race one winner Karthikeyan finished second on the road in the decider, but fell foul of the race officials for failing to come into the pits when shown a black and orange flag.

After making his mandatory pitstop, Karthikeyan incurred a deranged front-wing when trying to pass a stubborn Francesco Dracone, who had yet to make a pit call.

Super Nova team manager John Sears said that problematic screens on the pitwall had made it difficult for the team to relay messages to Karthikeyan.

The ex-Formula 1 driver's disqualification promoted early-season championship leader Sergio Campana to second position and Ghirelli to the final step of the podium.

Formula Renault 3.5 graduate Ghirelli played it safe in the early laps, circulating in eighth place as the last car in a train behind third-place runner Andrea Roda.

Ghirelli would also encounter difficultly passing former Super Nova driver Dracone, but unlike Karthikeyan, who required a victory to maintain his championship hopes this afternoon, Ghirelli took comfort in the knowledge that a top-five result would deliver his maiden title in car racing.

From fifth on the reversed-grid, Sato had made a flier away from the lights and braved the outside line at Turn 1 to challenge Andrea Roda for the lead.

Campana also passed Roda before the opening tour was complete, and initially appeared to have the measure of Sato on pace. But the anticipated duel at the front of the field fizzled out when Sato began to stretch his advantage after four laps.

Former Italian Formula 3 champion Campana elected for a relatively late pit strategy, and dropped behind a charging Karthikeyan when he rejoined the fray on lap 13.

Roda equalled his best result of the season in fourth, ahead of Tamas Pal Kiss and Kevin Giovesi. 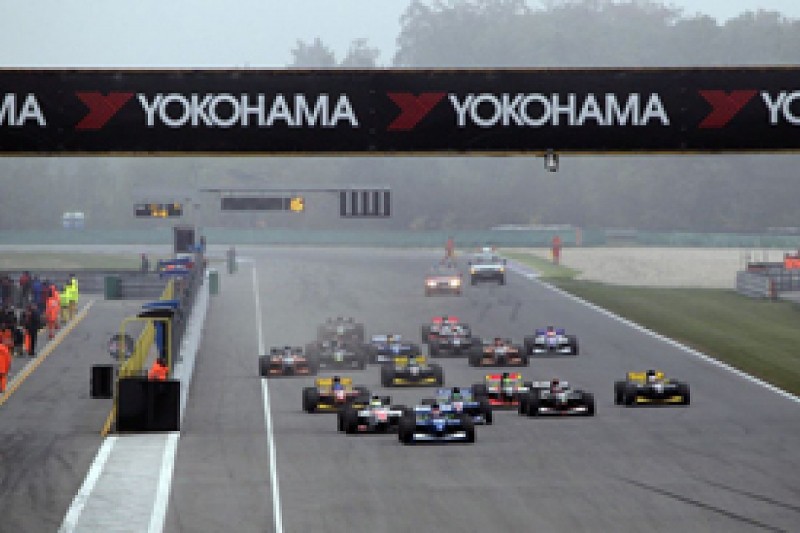 Ghinzani Motorsport's team manager was called to race control during the race after Giovesi was suspected of making a pitstop before the pit window had opened, but the Italian's sixth-place appears safe.

The only retirement was posted by Giovesi's Ghinzani team-mate Robert Visoiu, who left the track at Turn 1.

The rookie, who joined the championship for round six at the Nurburgring, bogged down with wheelspin at the start and would complete the opening lap in fourth, thereafter slipping down the order.