A crash for Tech3 KTM's Iker Lecuona at Turn 2 in the closing stages of third practice for the Spanish Grand Prix led to the opening sector being placed under double waved yellow flags while marshals were present trackside.

Marquez lifted off in accordance to the rules, but ended up easing off on the racing line as Suzuki's Rins was on a flying lap to try and get into the automatic Q2 places.

The incident was placed under investigation, but Race Direction felt no further action was required after Marquez presented his case.

When asked about it after qualifying third in qualifying, Marquez said: "Yeah, obviously I didn't see him.

"But anyway what the cameras didn't show was a double [waved] yellow flag at Turn 2, and there was some marshals and a rider in the middle [of the gravel].

"So I slowed down and when it's double yellow flags, you must slow down and you cannot be on your fastest lap.

"So, for that reason I didn't look behind because I didn't expect somebody would be pushing in that situation." 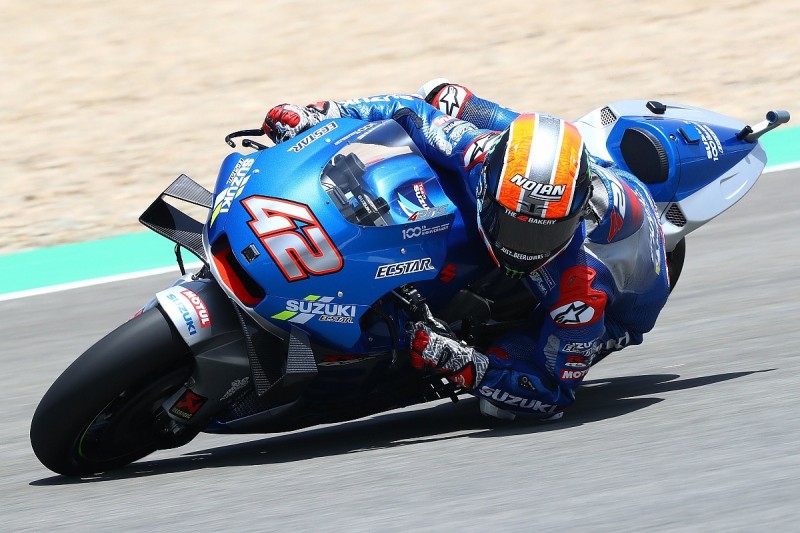 Rins crashed heavily at Turn 11 late on in Q2 and has been taken to hospital in Jerez for checks on a suspected right shoulder fracture.

This came just seconds after Pramac's Jack Miller crashed at the same place, leading to the yellow flag being shown and marshals springing into action for the Rins incident.

But this didn't stop several improvements coming on the timesheets at that moment, with poleman Fabio Quartararo's best effort coming at the end of the session.

Aprilia rider Bradley Smith says, because of this, he has a "question mark" over who "deserves" pole.

"I do not agree the fact that there was two or three riders improving their lap time in the last lap, especially with waved yellow flags, two riders down in Turn 11, two bikes inside the gravel and maybe up to five or six marshals there," Smith said.

"That's dangerous, the fact that anyone accepts that that's okay is downright wrong.

"So that's something that we really need to take into consideration.

"I don't care if that ruins Q2, that's just the way that it comes down to.

"You have two opportunities in Q2, you have tyre one and tyre two.

"I believe that the rule states that you must slow down and you must not improve your sector [under waved yellows].

"So, I have question marks as to who actually deserves to be on for position today."

Race Direction has not placed any riders under investigation for failing to slow for yellow flags in qualifying.