Mike Rockenfeller secured the DTM title for the first time, despite being beaten to victory by main title rival Augusto Farfus at Zandvoort

Farfus beat polesitter Marco Wittmann off the line to lead into the first corner in his RBM BMW and was unchallenged during the early stages as he built a lead upwards of four seconds.

Rockenfeller, who nosed his Phoenix Audi past Wittmann's MTEK BMW before the end of the opening lap, nursed his option tyres more effectively than Farfus and closed right onto the tail of his title rival before the opening pitstops.

Farfus pitted to switch to option rubber two laps before Rockenfeller and emerged with more than 2s in hand over the German.

Rockenfeller was unable to match Farfus for pace for the remainder of the race and even saw the Abt Audi of Timo Scheider exit the pits ahead of him after the second round of stops.

Scheider allowed Rockenfeller to retake second a handful of laps later, and acted as his rear-gunner for the remainder of the race, which included a late safety-car period after Jamie Green and Dirk Werner collided, sending the German into the wall at the Arie Luyendykbocht. 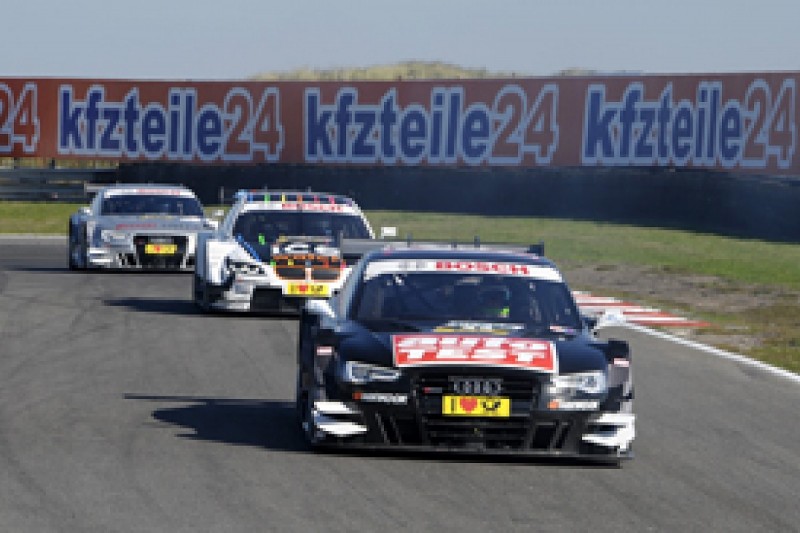 Scheider's first podium finish for over two years came at the expense of Wittmann, whose strategy of starting on prime rubber and taking options early on failed to pay off.

Wittmann was the final victim of a sensational late-race charge by Mattias Ekstrom, who ran last at one stage and waited until his final stint to use option rubber.

Aided by the safety car, Ekstrom went from 16th to fourth in 10 laps, passing Joey Hand, Adrien Tambay and Wittmann on the final tour.

Tambay finished sixth - one spot behind Wittmann - and ahead of Hand. Filipe Albuquerque nosed past Gary Paffett late on to take ninth while Miguel Molina completed the top 10.