The team opted to wait before sending the #8 TS040 HYBRID out on track at the beginning of a 25-minute prototype session that started with a wet patch at the Turn 11 hairpin that leads onto the back straight.

Davidson went off on the wet patch and had to abort his first lap before putting in 1m48.9s and 1m49.0s laps, which gave him the fastest aggregate time of the first drivers in the cars.

Toyota waited again before sending Buemi out and the Swiss had managed only one timed lap, a 1m49.1s, before a red flag was shown after the #12 Rebellion-Toyota pulled over at Turn 12.

That meant he had only four and a half minutes to complete the car's four-lap qualifying run, but another 1m49.1s leapfrogged the car to the top of the timesheets.

"It's great when a plan comes together," said Davidson.

"We knew it was damp down at Turn 11 and took the decision to wait as long as possible, because it would be getting drier every lap."

Buemi added: "When you have a red flag and have done only one lap you are a bit nervous because you never know what can happen, but our times were very good — four laps within two tenths."

That gave Davidson and Buemi, who share their Toyota with Nicolas Lapierre, a four-lap average of 1m49.093s, which was more than a second clear of the second-placed Porsche 919 Hybrid driven by Neel Jani and Romain Dumas.

The #14 Porsche jumped to second ahead of its sister car, shared in qualifying by Brendon Hartley and Mark Webber, when Jani returned to the wheel and managed a further flying lap to improve its aggregate.

Jani set the fastest time of the session overall on his first flying lap with a 1m48.8s, which was subsequently deleted because the car exceeded the maximum amount of energy to be returned to the track over the course of the lap by its recovery systems.

"We wouldn't have been on pole, but we would have been a lot closer to the Toyota," said the Swiss driver.

"We proved we have the ultimate performance and I am sure that whatever the problem was it didn't have an effect on our laptime."

Jani and Dumas set a four-lap average of 1m50.283s, which put them just two hundredths of a second ahead of team-mates Webber and Hartley.

Audi, which had set the pace in the two dry free practice sessions, ended up fourth and sixth after a lap trigger problem affected both its R18 e-tron quattros.

Marcel Fassler and Andre Lotterer ended up fourth, just four hundredths down on the second Porsche, after Fassler returned to the cockpit of the car for a second run.

"All the systems were confused, so it was not fun to drive," said Fassler.

"I got back in the car and it was better, but it was still not sorted, so it is very disappointing because we know what the car is capable of."

Fassler and Lotterer's average of 1m50.340s was two hundredths quicker than the fifth-placed Toyota qualified by Stephane Sarrazin and Mike Conway, while Loic Duval and Lucas di Grassi were a further 1.1s down in the second Audi. 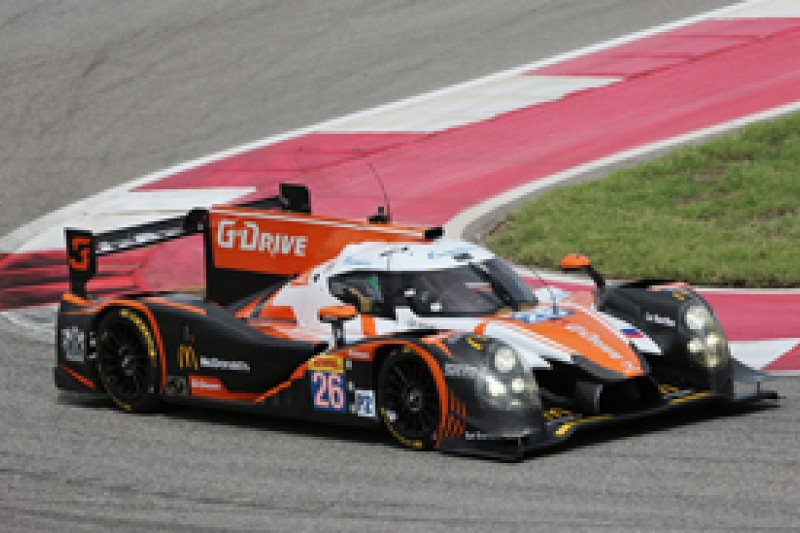 The OAK/G-Drive Ligier-Nissan LMP2 took the LMP2 pole in the hands of Roman Rusinov and Olivier Pla.

Pla put in a 1m56.1s and a 1m55.7s to complete an average of 1m56.075s, which put the Ligier three tenths clear of the KCMG ORECA-Nissan 03R qualified by Tsugio Matsuda and Richard Bradley.

The AF Corse squad called the wetter conditions of the GTE qualifying session to perfection, which allowed Gianmaria Bruni and Toni Vilander to take the GTE Pro pole.

Bruni was put back in the #51 Ferrari 458 Italia for a second run after Toni Vilander completed his two laps, the Italian setting a 2m05.245s to improve the car's average to 2m06.456s and jump to the top of the class times.

The #97 Aston Martin Vantage GTE ended up second in the hands of Stefan Mucke and Darren Turner on a 2m07.094s average.

GTE honours went to the ProSpeed Porsche pairing of Matthieu Vaxiviere and Emmanuel Collard, who are having their first race in a 991-shape 911 RSR.