McLaren introduced what it is calling its definitive 2018 Formula 1 car at last weekend's Spanish Grand Prix, the most visually obvious part being the new nose section

It is a package created from what Mercedes has run since Spain last year and subsequently optimised.

McLaren's previous nose was the same width as the front of the chassis, using very long wing mounting vanes with vertical slots to help pull as much airflow as possible under the nose and chassis central section. 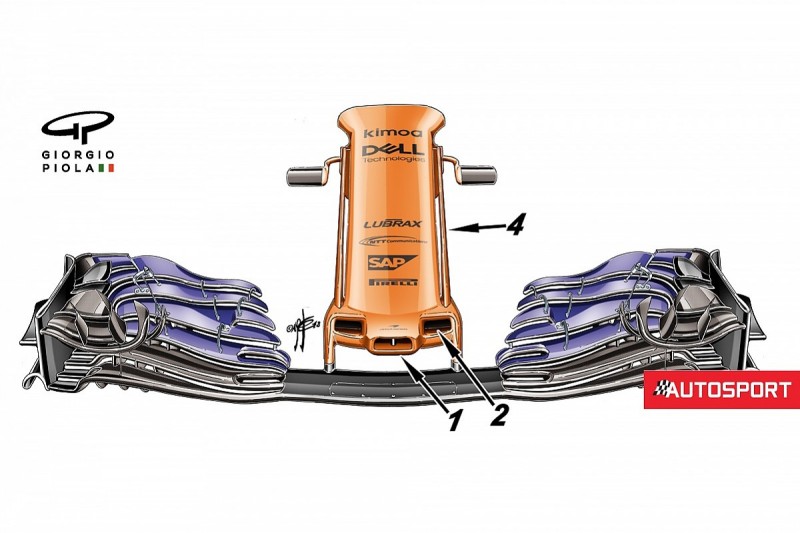 The new nose is narrower and has small turning vanes (4) running up the top outer corners of the nose.

These will help turn the airflow and keep it attached to the sides of the nose as it tries to fill the void underneath that is created by the droopy nose.

They exit under the nose along a horizontal slot that is divided into three sections (1 and 2).

This again takes more mass airflow and, in this case, exits it on the under surface of the Mercedes-style cape. 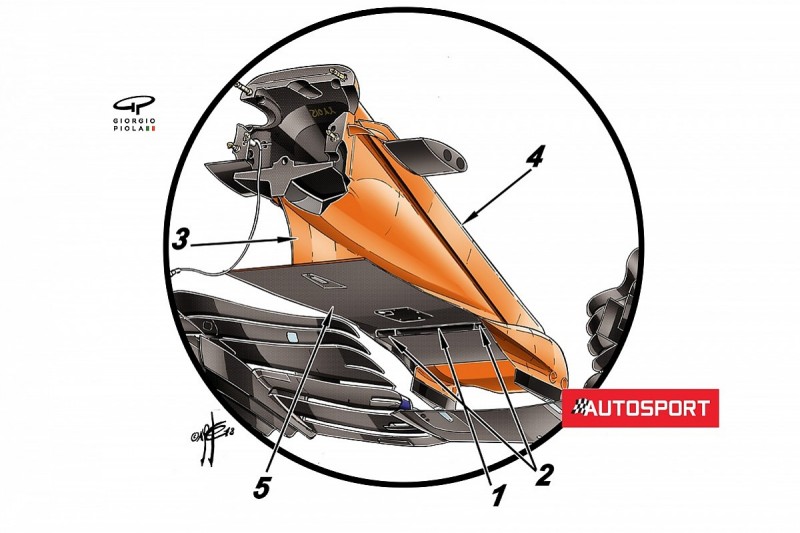 All of this is to increase the mass airflow that is going under the centre section of the chassis and to improve its direction as it comes off the trailing edge of the cape.

The cape (5) is mounted on a vertical vane (3) splitting the airflow left to right. This could also be a bit of a problem in turbulent airflow or cross-wind conditions. 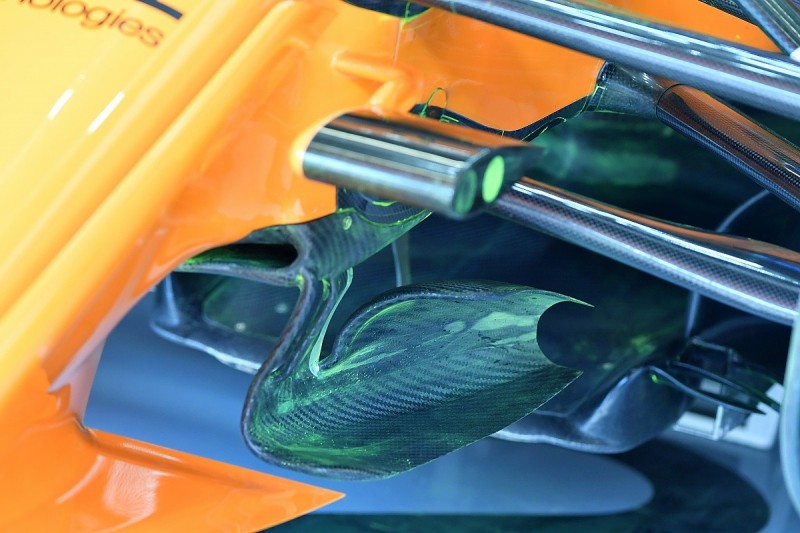 McLaren also introduced numerous other updates in Spain, including the underside chassis vanes.

While conceptually the same, these have been altered to work with the new nose.

The rolled surface tightens much more towards the trailing edge, as the airflow it receives is focused by the nose cape ahead of it.

McLaren's designers had already set the wheels in motion on this area of the car when they introduced a new set of deflectors in Bahrain. 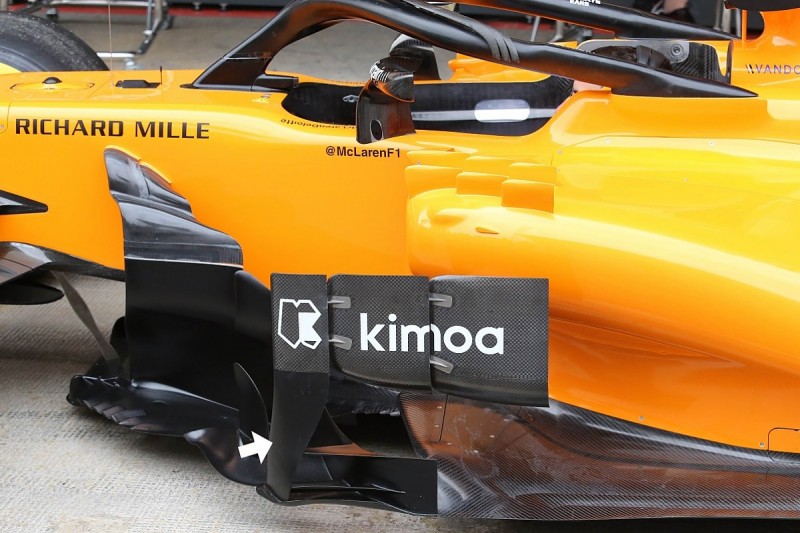 In Spain an optimised version was placed on the car, featuring a new vertical element (arrowed) that now sits astride the floors axehead.

The larger panel behind has been split into two distinct sections.

The floor ahead of the rear tyre is a sensitive area and has recently become home to various slotted solutions that help the airflow around the inner edge of the tyre and seal off the diffuser to improve its flow stability.

The 2017 regulations have altered approaches to this, as the regulations permit fully enclosed holes in the outer 100mm of the floor for the first time since 2008.

Teams didn't harness this fully in 2017, but are starting to jump on the bandwagon this year, with ever more mature solutions appearing at each race. 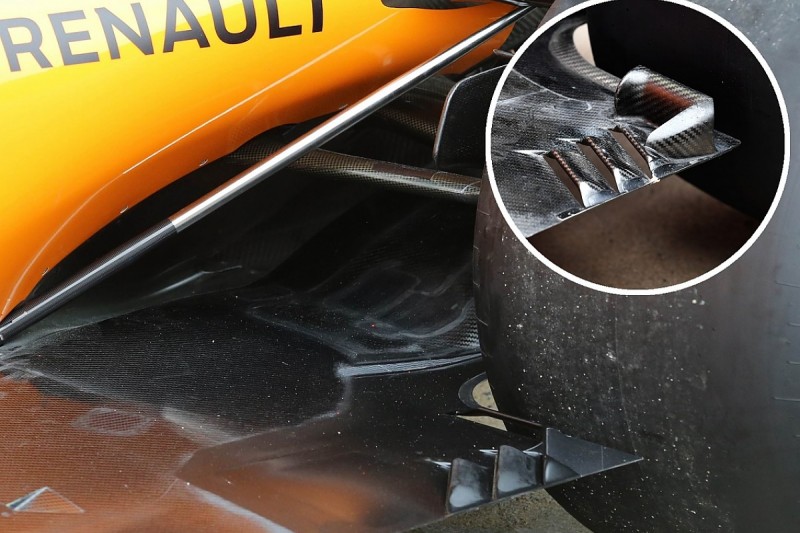 McLaren revised its solution just a few races ago (inset) but introduced a new version in Spain.

The previously upturned scroll ahead of the rear tyre has been discarded, in favour of a wider and fully enclosed hole just ahead of the tyre.

The MCL33's diffuser was also revamped in Spain, with the geometry of the central section and the perforated Gurney extensions revised (see inset for comparison). 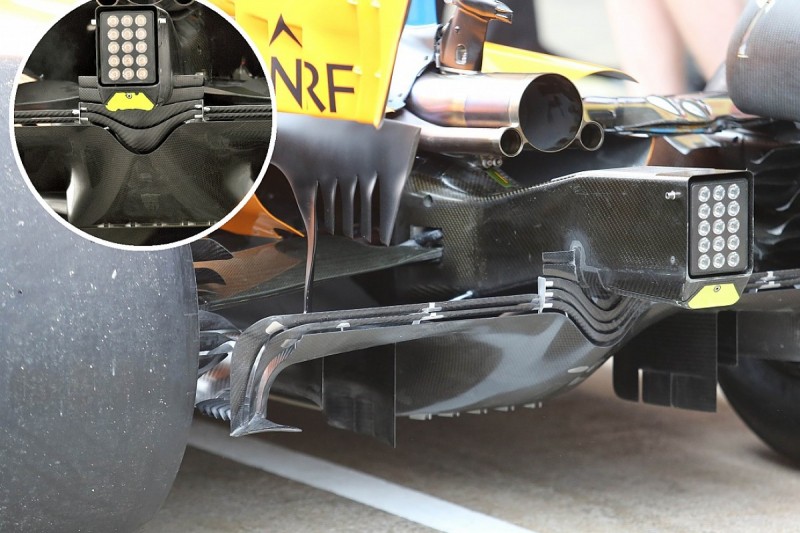 The ambulance driver who runs an F1 programme