Fernando Alonso's Belgian Grand Prix Formula 1 engine is available to use again, after Honda completed its checks of the power unit following the McLaren driver's retirement at Spa

Alonso ran as high as seventh at Spa, before dropping back to 12th and asking McLaren if there was any chance of rain to help him salvage a result - to which the team said no.

Shortly after that message, Alonso slowed and returned to the pits reporting an "engine problem", but Honda said after the race it found nothing in the data to suggest there was an issue.

Autosport has learned the power unit was taken back to Milton Keynes for analysis, but Honda could not find anything wrong and as a result have put it back in the pool.

It is available to use this weekend in Italy but it remains unclear if it will be drafted in as Honda is considering introducing an update on Alonso's car.

A final decision is due on Thursday night ahead of Friday morning's first practice session.

Should Honda introduce the update, which is focused on boosting power, only Alonso will get it and it is likely Honda will change his entire engine.

That would incur a 35-place grid penalty, consigning him to the back of the grid for Sunday's Italian Grand Prix. 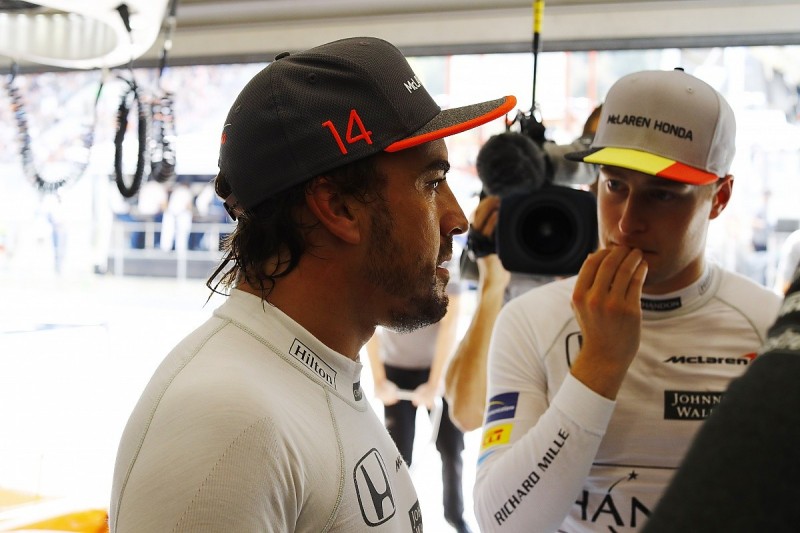 Alonso hinted at Spa that was he was likely to take penalties at Monza, when he suggested he would return the favour to team-mate Stoffel Vandoorne by offering a tow in qualifying because his grid position would already essentially be clear.

"We had it planned," said Alonso of giving Vandoorne a tow.

"Next week [at Monza] it will be the other way around because it's my turn.

"We were trying to take advantage of the penalties we have to find a positive and try to do the best for the team."

Honda and McLaren are keen to take their grid penalties tactically to ensure they maximise results at the circuits in which they feel a strong result is possible.

Taking engine penalties at Monza makes sense, given the following race in Singapore offers the team arguably its best chance of a good result for the remainder of the season.