The Le Mans-only #21 GT-R NISMO, to be driven by Tsugio Matsuda, Lucas Ordonez and Mark Shultzhitskiy, will run in blue to mark the 25th anniversary of Mark Blundell's pole position for the 24 Hours aboard a Nissan R90CK Group C car (pictured below).

Nissan, whose other two cars will run in corporate red, has so far only given a sneak preview of the livery in which the car will run at both next month's race, round three of the World Endurance Championship, and this Sunday's test day at Le Mans.

"Our 1998 car [the R390 GT1 car driven by Aguri Suzuki, Kazuyoshi Hoshino and Masahiko Kageyama] hangs on the wall at NISMO HQ in Yokohama as a reminder of our Le Mans podium and the blue liveries of the Group C and IMSA era of the 1980s and '90s are firm favourites with the fans. 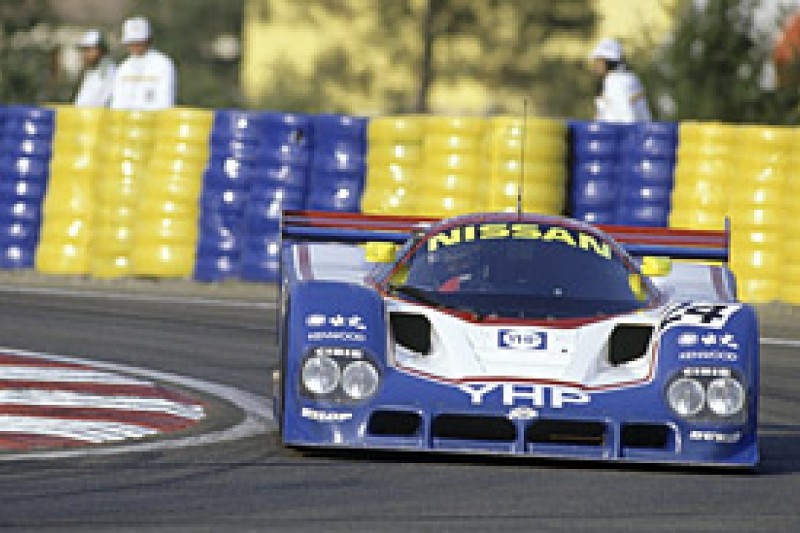 "So much so that when we first started talking about the possibility of a third car livery specifically for our LMP1 debut at Le Mans this year, this was the one that fans across our social media channels called for."

Blundell took the pole at Le Mans with a 3m27.020s lap, which put the Nissan Motorsports Europe-run entry over six seconds clear of its nearest rival.

The Briton, who went on to win Le Mans with Peugeot in 1992, said it was "great to see Nissan celebrating that time with the retro livery".

Nissan plans to give 2013 GT Academy USA winner Nick McMillen his first experience of Le Mans at the test day.

McMillen, who raced in last year's Blancpain Endurance Series, will take over the works-run Ginetta-Nissan LMP3 in which Le Mans rookies Matsuda, Max Chilton and Alex Buncombe will complete the 10 laps they must undertake at the test to be able proceed into race week.

Nissan wants remove the need to qualify its rookies in its regular cars so it can focus on development of the Ben Bowlby-designed front-engined P1 over the course of the test day.

DID YOU KNOW...
...the 1000bhp-plus that helped Blundell to pole at Le Mans in 1990 was the result of a jammed turbo wastegate? Nissan top brass wanted to abort the qualifying run, but Blundell and NME team manager Dave Price chose to ignore their instructions.