MotoGP championship leader Fabio Quartararo admits he is “struggling much more than usual” in qualifying at the San Marino Grand Prix, despite putting his Yamaha third on the grid.

Quartararo has an incredible qualifying record in 2021, scoring five poles and putting his M1 on the front row of the grid at all but one race so far.

At Misano he was once again third having qualified there at Silverstone and at Aragon, with his latest front row coming despite a late crash at the first corner.

Quartararo is surrounded by Ducatis at the front of the grid at Misano, with Francesco Bagnaia and Jack Miller first and second, and the Pramac duo of Jorge Martin and Johann Zarco fourth and fifth.

Commenting on the volume of Ducatis at the head of the field relative to Yamaha bikes, with the next-best M1 Franco Morbidelli down in 16th, Quartararo said: “I’m exactly in the middle of four Ducatis.

“So, of course it’s not the best. It would be great to have some of the blue bikes in front, but I hope that soon Franco will recover well and be up there because we are struggling much more in qualifying than usual.

“And I tried to give some great information to Yamaha for what I see today, it’s quite interesting. It’s not super-easy.” 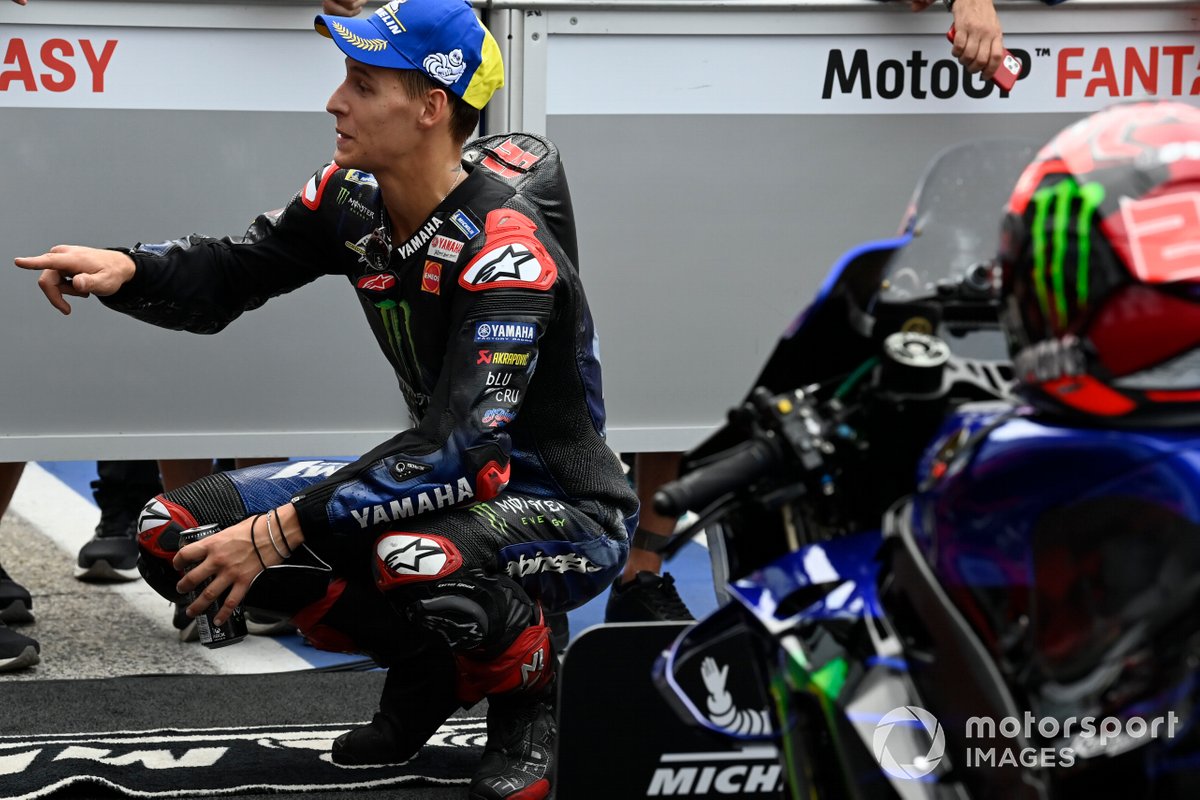 Quartararo says his crash at the end of qualifying was simply a result of him braking too late into Turn 1, but was happy to have found where the limit of the front tyre is ahead of the race.

“The fourth qualifying I made on this track in MotoGP and every time I’m in third position, so I think we made a great job,” he added.

“Last lap I tried a little bit too much in the first corner.

“We checked the data and I braked way too late, but this is what I wanted to do and it was great to feel that limit on the front.

“So happy about the pace I had in FP4, in the second run we made a small change on the bike and I improve with used tyres. So, looking forward to trying this set-up with the new tyre.”

Sunday’s forecast remains unsettled, with Quartararo admitting he wants a dry race having finished down in 18th in a wet FP2 on Friday.

Initially joking that his current form means he will be without points if the race is wet, Quartararo later clarified this comment and says he will not be conservative in a rain-hit race.

“We have many things to try, and in any case if it’s wet I will give my 100% because if we are in the wet I think now we have zero points,” he said.

He later added: “I wanted to say the position we were in FP2 was 18th, so it’s no points [if it was the race].

“We will see what happens if it rains. So, I have not to be conservative on the wet.”