Marc Marquez led the opening session for the MotoGP German Grand Prix on the Honda, with championship leader Fabio Quartararo second despite a crash.

This weekend’s German GP marks MotoGP’s first visit to the country since 2019 after last year’s event had to be cancelled due to the COVID-19 pandemic.

Ducati’s Jack Miller set the initial benchmark with a 1m23.367s as the Italian marque comes to a track it hasn’t won at since 2008 and hasn’t stood on the podium at since 2016.

For the last 10 years Honda has been the dominant force at the Sachsenring, with Marc Marquez unbeaten across all classes at the venue since 2010.

The six-time MotoGP world champion expected on Thursday this weekend’s German GP to be his first of the season “without physical limitations”, and backed this up in the early stages of FP1 by going top with a 1m22.348s.

With the circuit featuring only three right corners where Marquez has struggled this year with his arm and shoulder, Marquez continued to improve at the top of the timesheets with a 1m21.660s.

At one stage Marquez – who is running a new aero fairing in Germany - led a Honda 1-2-3 ahead of LCR’s Takaaki Nakagami and factory team-mate Pol Espargaro, though Yamaha’s Fabio Quartararo would split up the Hondas in second in the latter stages.

The championship leader’s session was interrupted briefly 10 minutes in when he crashed at the Sachsen Kurve left-hander at the bottom of the hill at Turn 12.

Quartararo initially appeared to have hurt his right shoulder, but was able to re-join the action soon after. 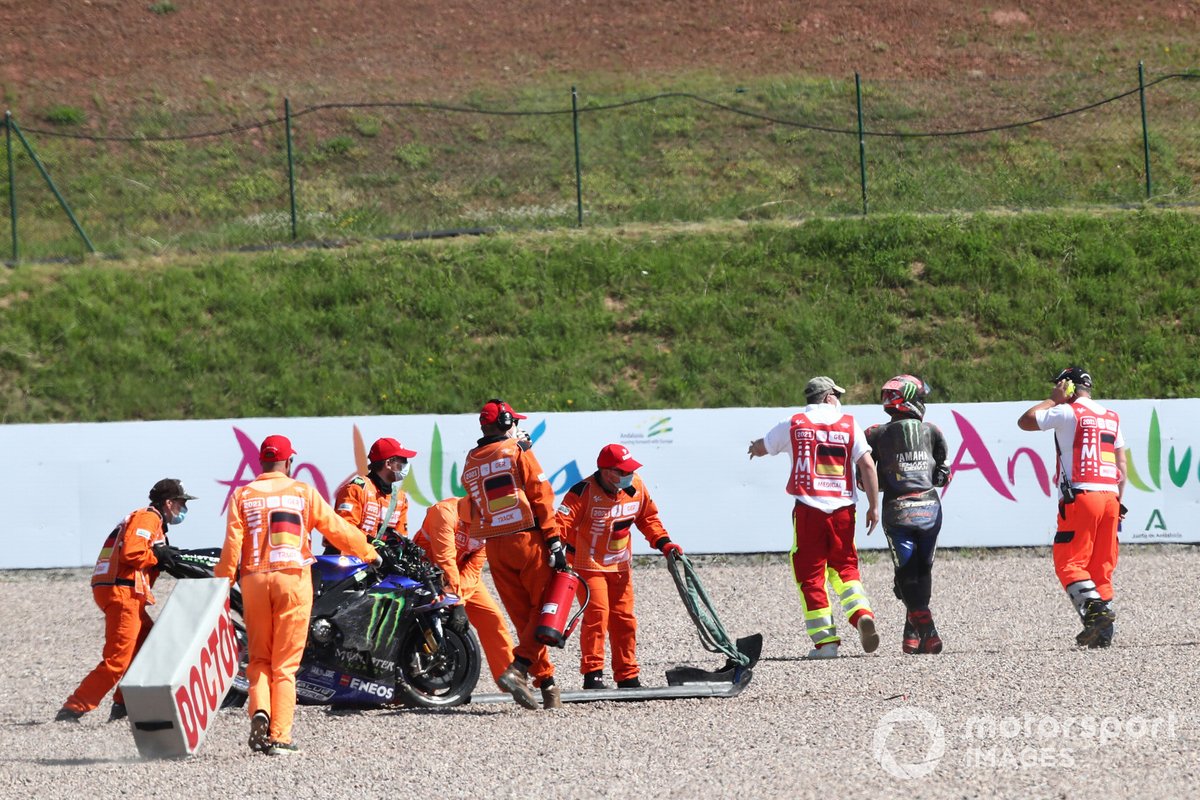 Marquez’s lap time came under no threat through to the chequered flag, the Honda rider ending the morning 0.168 seconds clear of Quartararo.

Nakagami completed the top three ahead of the Espargaro brothers, Pol – who crashed early on at Turn 2 - leading Aprilia-mounted Aleix.

Miller was the first of the Ducati riders in sixth, 0.391s off the pace, with Alex Rins an encouraging seventh on the Suzuki has he returns to action after breaking his arm in a cycling accident in Barcelona and missing the Catalan GP.

Johann Zarco on the Pramac Ducati, world champion Joan Mir on the Suzuki and Yamaha’s Maverick Vinales completed the top 10, with Francesco Bagnaia just missing out in 11th on his Ducati ahead of Barcelona race winner Miguel Oliveira on the KTM.

Brad Binder was 1.3s off the pace in last on the sister factory KTM as he got to grips with Sachsenring on a MotoGP bike, the South African trailing Tech3’s Iker Lecuona, who – along with team-mate Danilo Petrucci in 18th – have the new KTM chassis for the first time.

Valentino Rossi was a low-key 20th on his Petronas SRT Yamaha, with team-mate Franco Morbidelli 14th sandwiched between Avintia rookies Luca Marini in 13th and Enea Bastianini in 15th.

Pramac’s Jorge Martin was the only other faller in the session, the rookie taking a tumble early on at the Sachsen Kurve on his way to 19th on the timesheets.