The Team Penske ace conquered last year's Indy 500 after a thrilling duel with 2016 winner Alexander Rossi of Andretti Autosport, and can expect to be one of the pre-race favourites again.

However, Pagenaud is wary of the fact that with just two days of practice before switching to Fast Friday turbo boost levels, as highlighted by his race engineer Ben Bretzman last week, track time will be at a premium.

Following Fast Nine qualifying on Sunday, the teams are set for 2hrs30mins more practice at race day boost, but then won't hit the track again until Carb Day's two-hour session the last practice before the race.

There are yet further time constraints possible - maybe probable - due to the poor weather forecast for this week.

"It's going to be the same for everybody," Pagenaud said. "So, you know, the best is going to win and that right there is key - being the best. So every decision we're going to make we're gonna have to make sure that it's the right one.

"I put even more emphasis on the communication with my engineer, and understanding what my team-mates are trying also, to try to understand the whole process.

"But I need to focus on exactly what I need and clear-cut decisions. That's really what it's all about... I welcome my experience up to this point. I think experience could be a big help this year." 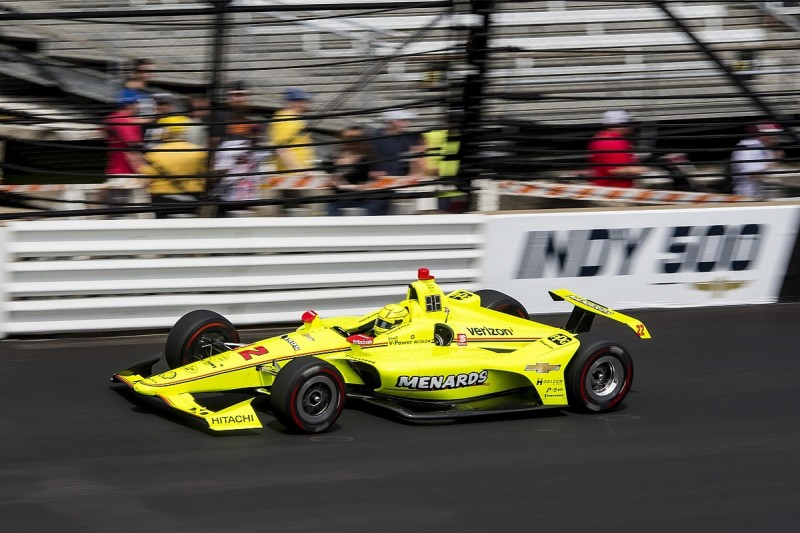 That said, the experience has changed for everyone, with teams having to get used to the handling properties and tyre wear of the cars with the increased weight and revised weight distribution caused by the aeroscreen.

Pagenaud say it hasn't altered the nuances between the four Penske drivers - himself, Josef Newgarden, Will Power and Helio Castroneves - but admits there's a big task ahead for all of them.

"This added weight to the car has certainly added stress to the tyres and obviously you can imagine that on the Speedway, at these kinds of speeds, the centrifugal force when you add weight to the front of the car changes the behaviour and the radius of the car around the corners. Those are things that we will notice and we will have to work with it in the next few days.

"The fact that it's a condensed schedule is a bit stressful because we don't know what to expect very much yet, so we're going to have to make decisions quickly and be sure that is the right decision. We won't have as much time as usual to go back to the [set up] pad and set the car up. It will be more like a Pocono weekend.

"But the differences haven't changed that much. It's about who hits the set up the best."