With third place Hamilton lost only 10 points at Spa to winner and Mercedes team-mate Nico Rosberg to hold a nine-point lead in the championship, despite taking grid penalties for introducing three fresh engines this weekend.

"To come out with a clean race like I did, to only lose 10 points and have three new engines is a super bonus," said Hamilton.

"We prepared ourselves in a way where we hoped we'd get some points.

"But someone took me up to the paddock club today and I said [in an interview] I might not even finish.

"But at the next race I've the same amount of engines, if not more than others now, and I can fight in the last eight races."

Hamilton was aided by the collision between Max Verstappen, Kimi Raikkonen and Sebastian Vettel at the start, meaning all three were behind him at the end of lap one.

Jenson Button and Pascal Wehrlein retired on the first lap after a separate collision, helping to promote Hamilton to fifth after nine laps when the race was red flagged for Kevin Magnussen's crash. 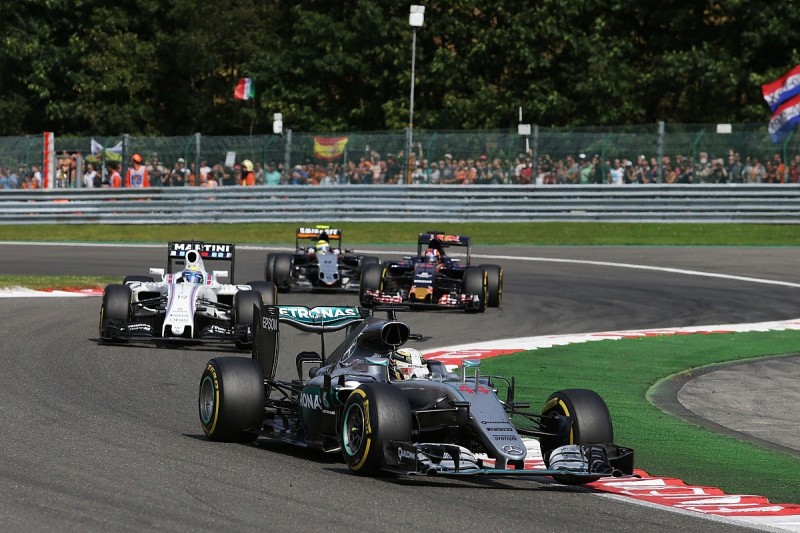 At that stage a win was on the cards, but Mercedes split strategies under the red-flag conditions and Hamilton was unable to catch Daniel Ricciardo for second place at the end.

"At that point [at the red flag] I was already in the points, which was great, so it was just a case of seeing what I could get," Hamilton added.

"The thought of the win crossed my mind, but I was also conscious the gap was already quite big to Nico, who was obviously having a Sunday drive.

"He didn't have any stress from anyone, and was gone by the time I'd got past Fernando [Alonso] and the Force India of [Nico Hulkenberg].

"So at that point I was just trying to fight for as many points as possible.

"If someone had said 'You're going to lose 10 points and take three new engines, are you OK with that?' I'd have said I'd take it, so I'm very happy with it."

Max Verstappen 'dangerous' but compared to Senna by Toto Wolff