Three-time and reigning champion Sutton was drawn on reversed-grid pole position and, after appearing to get a strong initial launch in his Motorbase Performance-run Ford Focus, he seemed to bog down and that allowed Dan Rowbottom to sweep into the lead.

But then Rowbottom ran a little too hot into the Agostini left-hander, and the Team Dynamics Honda Civic Type R driver was unable to prevent Sutton getting a run on him and claiming the lead into the following Hamilton bend.

Into the next turn, the tight right-hander at Oggie’s, veteran Jason Plato also made an opportunist move to get his BTC Racing Honda down the inside, slight contact being made as Plato made his way into second position.

Plato, in his landmark 650th BTCC start, put pressure on Sutton in the early stages, but by the fourth lap the Ford had eked the gap out to over a second.

Plato now had to run some laps without hybrid to stay within his allocation, allowing the leader to get away, and at the end of the 12-lap race Sutton breezed to the flag to take his second win of the season by 4.556s.

“It’s mega,” said Sutton. “If I’m honest we had exactly the same settings on the car as race two, but damage in that one put the alignment out.

“If I’d had that car in race two it could have been a different story.

“We set up the car for a long race and she was a bit lively but consistent – Jason got close, but I put my head down and set some quali laps to pull away.” 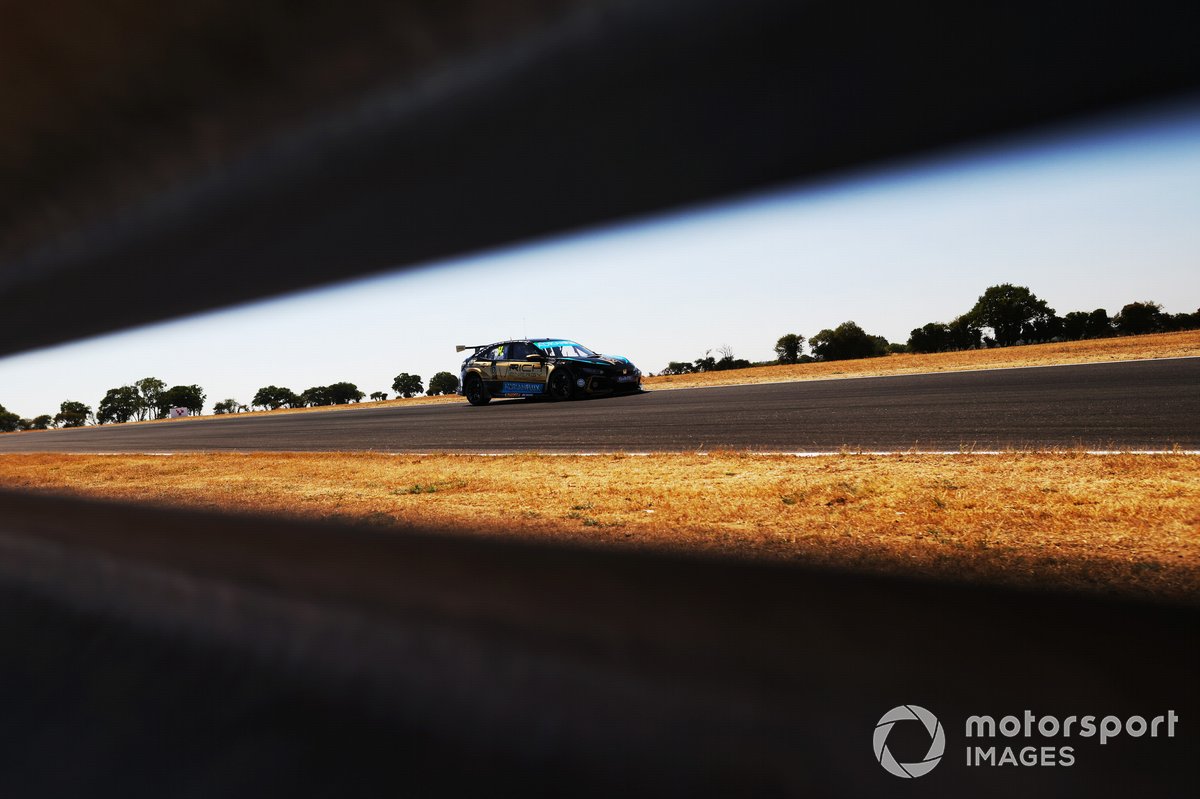 Rowbottom stayed in third position for four laps, before Ricky Collard managed to battle his Speedworks Motorsport Toyota Corolla ahead, and Tom Ingram also took advantage to sneak into fourth.

Ingram’s Excelr8 Motorsport Hyundai i30 N stayed glued to the rear bumper of Collard until the last lap, when he pulled off a superb cutback manoeuvre out of Agostini to grab the position into Hamilton.

But Collard wasn’t finished – he saw a chink of light on the inside of the Hyundai into Oggie’s, dived in to fill it, and barged Ingram wide onto the dust and marbles to reclaim the final podium spot.

The Toyota driver was then give a one-second penalty for the manoeuvre, relegating him to fourth and promoting Ingram to complete a hat-trick of third places on the day.

While Rowbottom went into freefall down to an eventual 10th place, Jake Hill and Colin Turkington came through to complete an excellent day for the West Surrey Racing squad – following their pair of 1-2 finishes earlier on, they claimed fifth (Hill) and sixth (Turkington) in their BMW 330e M Sports.

A heavy clash at the esses with the Speedworks Toyota of Rory Butcher dropped third WSR BMW contender Stephen Jelley out of the frame, and Butcher went on to take seventh from Adam Morgan’s Ciceley Motorsport BMW.

The last driver to pass Rowbottom, who just fended off the BTC Honda of Josh Cook at the finish, was Ollie Jackson, who moved his Motorbase Ford up to ninth on the last lap.