Ogier - who trails Neuville by seven points in the standings - completed the tight and twisty two-mile asphalt test in 3m35.3s, besting Neuville's time by a brilliant 3.7 seconds.

"It won't be easy for the rest of the weekend," said Ogier.

"We had a good strategy on the tyres but tomorrow we have a little less tyres than everyone else."

Neuville rolled on the pre-event shakedown, and thanked his mechanics at the end of SS1 for repairing his i20 Coupe WRC ready for the start.

He will open the order on Friday, running first on the road in the rally's gravel phase, clearing a path for those behind. 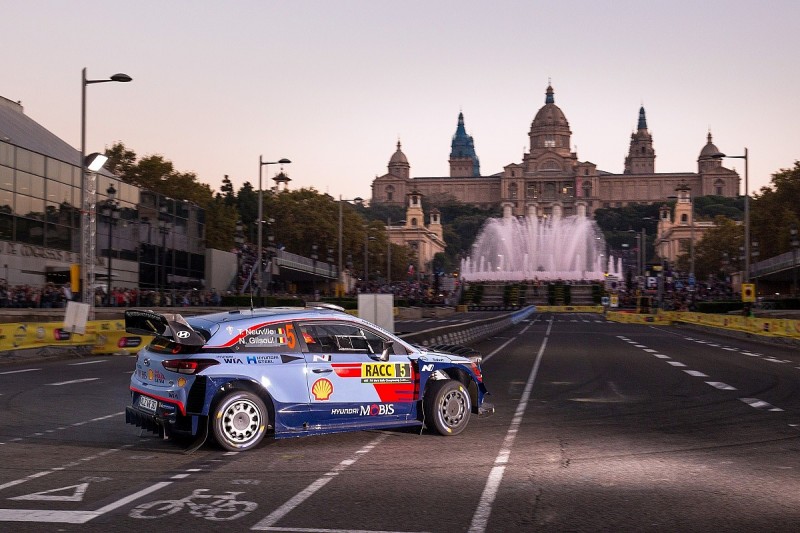 Ott Tanak made sure all three title rivals were at the head of the order, the Toyota driver ending the stage just 0.5s behind Neuville. Hyundai's Andreas Mikkelsen said he felt "positive" as he took fourth, ahead of Ogier's Ford Fiesta team-mate Elfyn Evans.

Despite running well down the order and in the dark, while most of his WRC2 rivals had driven in the light, Eric Camilli was a stunning sixth on the first stage Volkswagen's new Polo R5 car has completed in competition. The ex-M-Sport driver has carried out much of the testing on the new car, and comfortably topped his class.

Dani Sordo returns for his home event after a lengthy absence in the Hyundai he is sharing this season with Hayden Paddon and took seventh, ahead of WRC2's second-place man Kalle Rovanpera.

Behind the 18-year-old Skoda Fabia driver, Craig Breen was the leading Citroen driver in ninth, as WRC2 champion-elect Jan Kopecky rounded out the top 10 ahead of Toyota team-mates Jari-Matti Latvala and Esapekka Lappi.

Camilli's team-mate Petter Solberg was 15th in the second Volkswagen Polo R5 on his first WRC outing since 2012.

The 2003 WRC champion was by far the best of the returning stars on this event.

Nine-time champion Sebastien Loeb - making his third appearance of the year in a Citroen C3 - was 15.9s slower than Ogier and well behind a group of R5 cars in 27th, while Gymkhana star Ken Block ended the stage 26.5s down on Ogier in 32nd.

Block completed two more doughnuts than were required on his run as he showboated for the spectators.