Jorge Lorenzo finished his time with Yamaha with a commanding victory at Valencia in the 2016 MotoGP season finale, as Marc Marquez won a spirited fight for second place

Lorenzo secured a 44th and final win for Yamaha before moving to Ducati in 2017 by 1.185 seconds after leading from start to finish.

It was Lorenzo's first win since the Mugello race in late-May, and Yamaha's first since Valentino Rossi's victory at Barcelona a fortnight later.

Polesitter Lorenzo got an early jump as Marquez was slow away from second and dropped to sixth and Andrea Iannone went the other way, vaulting from seventh to second.

Lorenzo pulled away immediately, settling into a rhythm in the low-1m31s.

Behind him, Iannone led Maverick Vinales and Rossi, while Marquez was quickly back into fifth place.

By the time Rossi took third from Vinales, Iannone was half-a-second clear, but Rossi wasted little time in erasing that margin.

Rossi and Iannone essentially spent the rest of the race fighting each other, the latter using the Ducati's noted engine power to breeze back past down the main straight whenever Rossi was able to sneak past.

The first real exchange came on laps seven and eight of 30, and Rossi then overshot Turn 1 after his second pass. He could not make a decisive move until lap 10, by which time Lorenzo was 3.931s clear. 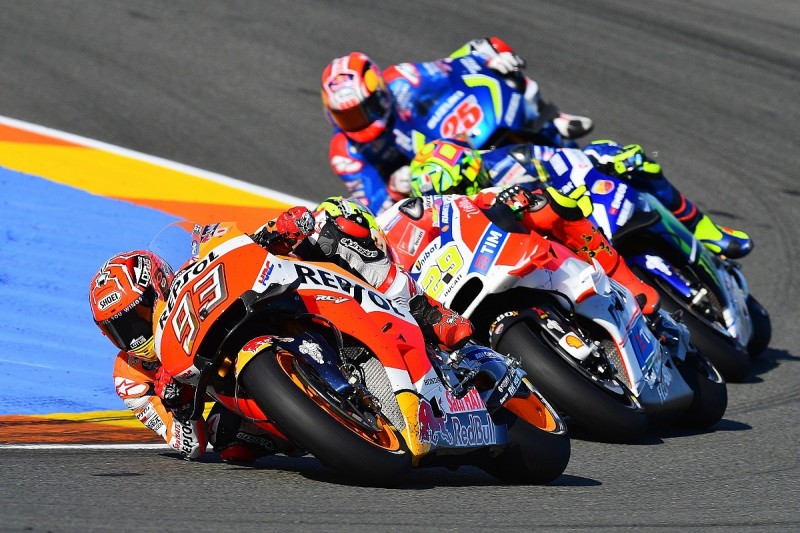 Lorenzo's lead continued to grow and hit five seconds, before he cruised home on his final laps with Yamaha.

Rossi could not pull away in the fight for second, and was passed by Iannone and then Marquez.

Honda's Marquez went through a similar process as Rossi while trying to pass Iannone, and eventually claimed second place.

Marquez was able to skip clear, and while he more than halved Lorenzo's lead, he ultimately finished his title-winning season with second place.

Rossi fought back at Iannone in the closing laps, the pair trading places several times again before Iannone secured a podium in his final start for Ducati.

That left Rossi fourth, while his 2017 team-mate Vinales dropped behind the pair and leaves Suzuki with a fifth-place finish.

Tech3 Yamaha's Pol Espargaro was the top satellite rider in sixth, beating Andrea Dovizioso - who was in the fight for second early - by 0.039s.

Aleix Espargaro joined his brother in hauling in Dovizioso, and finished eighth, while Bradley Smith and Aprilia's Alvaro Bautista rounded out the top 10.

KTM's MotoGP debut ended early, with Mika Kallio retiring after 20 laps, having been last and more than five seconds behind the rider in front when he pitted for the first time.

Race winners this year, Dani Pedrosa and Cal Crutchlow's seasons finished with crashes, Pedrosa from seventh at Turn 2 early, Crutchlow while ninth at Turn 7, just after the halfway mark.