Jorge Lorenzo thought a laptime deletion in Assen MotoGP qualifying explained his fall from provisional pole position to 10th on the grid, with his rivals' pack-riding ultimately making the difference

Ducati's Lorenzo briefly went quickest in the closing stages of the pole position shootout for the Dutch TT, although he was soon edged by Andrea Iannone, who was following in his slipstream.

With almost all the remaining riders in Q2 circulating in one large group and benefitting from each other's slipstreams, Lorenzo then slipped down to 10th place at the chequered flag, 0.376 seconds behind polesitter Marc Marquez.

"When I went from first to tenth, I thought [my lap] had been cancelled," said Lorenzo.

"I think [Johann] Zarco, together with me, was the only one who was alone and the rest of the riders were like a train.

"They were the perfect [amount of] metres [apart] to be as fast as possible, and more or less the same metres. Strange situation, strange qualifying.

"Everyone took profit [from] this little advantage that gives you two to four tenths, and the ones who were alone like Zarco and me, were eighth and 10th."

Lorenzo said on Friday that he was losing considerable time in Assen's high-speed final sector, and felt that he was still giving away time there during qualifying.

"If I wouldn't lose so much in the last sector, even without any rider in front, I could be on the front row," he said.

"Unfortunately at the moment in T4 I always lose two to four tenths.

"[We'll] try tomorrow to modify the bike to give me more confidence in those particular two corners, the fast ones before the last chicane.

"But this is it, these two problems prevented us from being further in front." 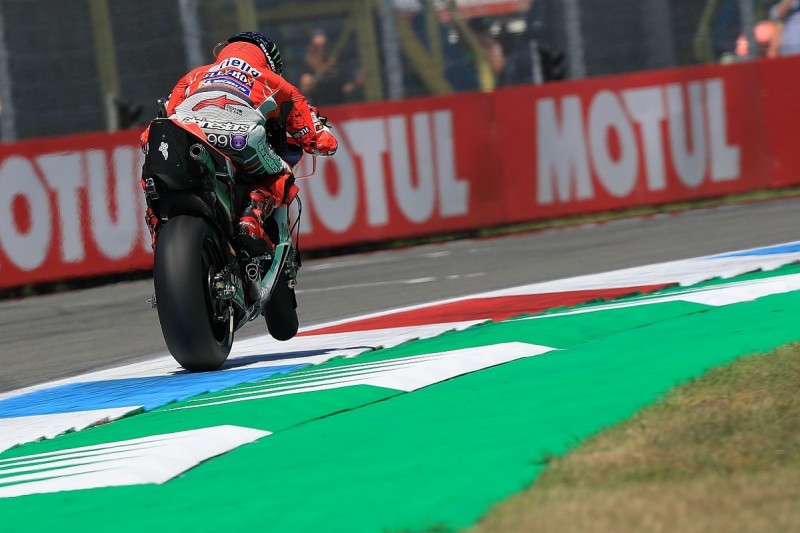 Lorenzo added that he hopes a strong start on Sunday will help make up for his lowly position on the grid, as he aims to continue a run of form that has produced back-to-back victories at Mugello and Barcelona.

"It's complicated to be so behind, because the track is quite narrow, difficult to overtake," he said.

"First or second row would be much better.

"The good thing is I'm making good starts this weekend, if I do the same tomorrow I can overtake probably one row [of riders].

"It will be a race to have patience in the first two laps, and then see how the tyres are reacting.

"It can be a race of some crashes - we need to be careful, especially with the front."