The Frenchman was one of a cluster of drivers involved in a frantic battle following a late restart, and took the lead from Marco Andretti with seven laps remaining.

As Andretti's charge faded, Josef Newgarden emerged as the main threat to Pagenaud's chances, and the American managed to reduce what had been a 1.9-second deficit to 0.9s within just two laps.

But he leaned too hard in his tyres in doing so, and Pagenaud was able to pull away to win by 4.1s. The win moves the Schmidt driver up to third in the points.

Newgarden held on for second, putting the Sarah Fisher Hartman driver onto the podium for the first time in his IndyCar career, while Sebastien Bourdais was one of many to survive contact on his way to third for Dragon.

Aside from the late action, the race was defined by the proliferation of incidents, a string of disasters for the main title protagonists, and another development in the rivalry between Penske and Ganassi.

A long stretch through the middle of the race was held almost entirely under yellows due to constant accidents on restarts, but the most significant came when Will Power skewed towards the wall on the front straight and slammed straight into Scott Dixon, putting the Kiwi into the barriers.

The clash came just a week after Dixon was penalised for hitting one of Power's pit crew at Sonoma, and the Kiwi's anger was further stoked when IndyCar refused the team's request to bring his car back to the pits so that it could attempt a repair in the hope of salvaging some points. 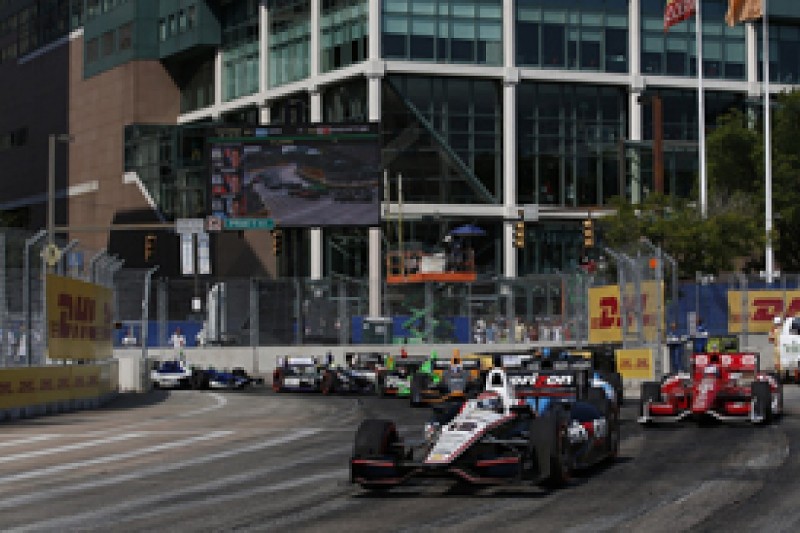 Prior to the crash, Dixon had been in a strong position to capitalise on what was shaping up to be an awful afternoon for points leader Helio Castroneves.

The Brazilian's dramas included an accident at the start that required him to pit for a new front wing, a bad pitstop in which he was dropped off the jack before his right-front wheel had been fitted, and a drive-through penalty for hitting one of his own tyres in the pits.

Instead, Castroneves came out of the afternoon having actually extended his points lead to 49. He crossed the line in ninth.

Ryan Hunter-Reay's title defence also took a hit when he encountered an anti-stall problem on the first lap that dropped him towards the rear of the field, and his misery was completed when his car shut down with an electrical problem later on.

The Andretti driver was one of several to be sidelined with mechanical or engine problems during the afternoon, joining a list that also included Dario Franchitti, Takuma Sato and Luca Filippi.