Four-time World Touring Car champion Muller grabbed the lead at the start, and headed the way over the three-lap race distance on the 15.77-mile circuit, despite heavy pressure from a trio of cars behind.

The win was Muller's first since returning full-time from retirement to contest the WTCR world cup, and since he won for the Citroen WTCC outfit at Motegi in 2016.

Having started second, Muller beat polesitter Bjork off the line into the first corner and kept his nose ahead on the left-handed cutback for Turn 2 to hold the lead onto the Nurburgring Grand Prix loop.

The Frenchman led an early YMR Hyundai i30 N breakaway as the field headed onto the Nordschleife for the first time, as Rob Huff squeezed his Sebastien Loeb Racing Volkswagen Golf GTi into third ahead of Norbert Michelisz (BRC Racing Hyundai).

But Huff quickly closed up on the leading two, dragging Michelisz with him, as the quartet circulated within two seconds of each other over the remaining two and a half laps. 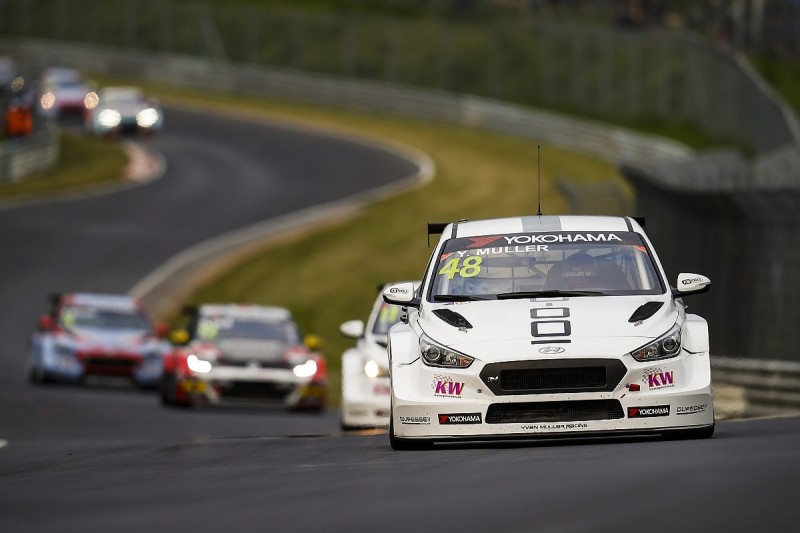 Bjork got close enough on two occasions on the final two laps to move out of Muller's slipstream on the long Dottinger Hohe back straight, but could not get past his team-mate as Muller held on to win.

Huff ensured there was no Hyundai lockout of the top three positions, rebuffing two attempts from Michelisz to get back past into the Tiergarten complex to claim the final podium position.

Jean-Karl Vernay steered clear of incidents at the first corner to pick his way through to fifth from ninth on the grid in his WRT Audi RS3 LMS, resisting the sister wildcard entry of Rene Rast on the final lap.

Gordon Shedden took seventh in the third WRT car, advancing from 17th on the grid after a 10-place penalty for not slowing significantly under yellow flags in qualifying - an offence for which Rast received a similar penalty.

Overtakes on the pair of Boutsen Ginion Hondas netted Pepe Oriola eighth in his Campos Racing Cupra on the final lap, with Tom Coronel the leading Honda representative in ninth ahead of team-mate Benjamin Lessennes.

Points leader Gabriele Tarquini's race ended disastrously at the end of the first lap, when he hit a barrier at the Hohenrain-Schikane in his BRC Hyundai just before the run to the start/finish line while challenging Vernay for fifth.

Tarquini had earlier triggered one of the incidents at the first corner when he tapped fourth-place starter Esteban Guerrieri into a spin after the Honda driver had backed out of a move on Huff for fourth place.