Franco Morbidelli says it's a "common habit" to brand collisions like his shunt in the MotoGP Austrian Grand Prix a racing incident, but says "someone needs to pay" for it

The Petronas SRT rider collided with the rear of Johann Zarco's Avintia Ducati on the run through the fast Turn 2 kink during Sunday's Red Bull Ring race, with both lucky to escape unscathed from the violent crash which led to the race being halted.

The two machines also narrowly avoided wiping out the Yamahas of Valentino Rossi and Maverick Vinales as they exited Turn 3.

No action was taken on the crash and it was deemed a racing incident, but Morbidelli has taken to Twitter to air his views on this.

"We will talk about it on Thursday [at the second Austrian MotoGP race], that's for sure," Morbidelli said.

"I think that every time both riders crash it is a common habit to call it a racing incident and situation solved.

"Great luck we're in one piece, but someone needs to pay [for] the mistake." 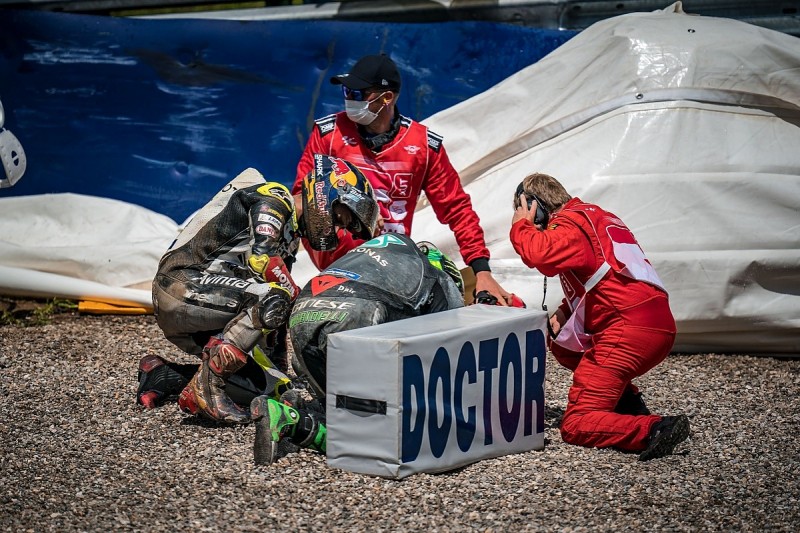 Zarco appeared to move off line under braking to defend against Morbidelli from coming up the inside of Turn 3, though the Frenchman denies this was the case and insists he is "not a crazy guy".

Several riders were quick to point fingers, with Aprilia's Aleix Espargaro noting: "Every time you move from behind other riders, you have downforce, no downforce, downforce - the front is shaking, sometimes you have no brakes.

LCR's Cal Crutchlow was more measured, holding the view that it was a racing incident.

"I don't think anybody was in the wrong particularly, it's just a racing incident," Crutchlow said when asked for his views on the crash by Autosport.

Morbidelli branded Zarco a "half killer" to Italian TV on Sunday, and said Zarco's line under braking at that point showed "little love" for both riders.

Zarco spoke with Rossi after the incident to explain his version of events and to show that what he did wasn't deliberate.

Rossi - who called his involvement in the incident "terrifying" - believes riders need to not "exaggerate" the aggression they are now showing in all classes of grand prix racing while racing.