The Red Bull driver finished six seconds behind race winner Valtteri Bottas, and withstood a late charge from the other Mercedes of Lewis Hamilton to secure his fifth consecutive podium.

Ricciardo had eased clear of Kimi Raikkonen's Ferrari in the opening stint and kept the Finn's team-mate Sebastian Vettel - who finished second - in sight for the majority of the grand prix.

In Baku, Ricciardo only won after Vettel picked up a penalty for hitting Hamilton under the safety car and Hamilton had to pit to change a loose headrest.

The Australian suggested mixing it with the frontrunners on merit at the Red Bull Ring was more significant than his first win of the season.

"Don't get me wrong, the kind of relief over the finish line was for sure for the podium but I'd say the biggest happiness for today is that we had raw pace.

"Obviously Baku was a victory, but things happen in the race.

"Today we earned a podium on a circuit which for sure isn't our strength.

"The car is certainly getting there and it's all I can ask for." 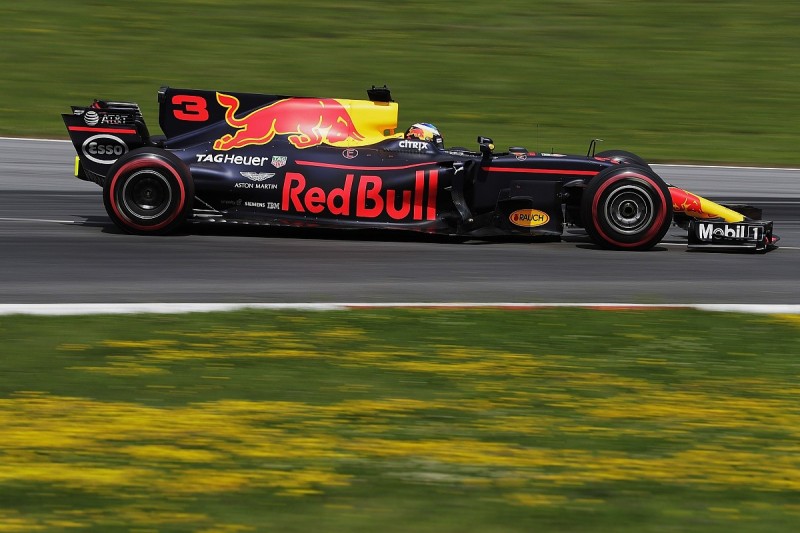 Ricciardo had to defend from Hamilton on the penultimate lap, after a small mistake at Turn 3 at the top of hill let Hamilton attack heading towards the downhill Turn 4 right-hander.

Hamilton almost drafted past the Red Bull on the outside, but Ricciardo braked later and retained the place.

"The second-last lap I didn't get the best exit out of Turn 1 and he got a good run, so I defended into Turn 3, and then I knew he had DRS so I had to defend into Turn 4," Ricciardo explained.

"It got pretty close but I just stuck to my braking points and when I thought the limit was and held [him] off."

"I was giving it hell and I wasn't closing massively," he said.

"It was down to a mistake of his at the end that really opened up the window.

"If they can pull that out in qualifying, I think that's going to be great for the rest of the season - we've got a third team that are going to be battling out with us."