Honda is still chasing answers to why Alonso's engine blew-up after encountering a sudden oil pressure loss just three corners into an installation lap at the Circuit de Catalunya.

But Brown said that with Alonso having failed to make the start of the Russian Grand Prix two weeks ago, it was incredible that his home event got off to such a bad start.

Asked about what his reaction was when he saw Alonso come to a smoky halt, Brown said: "Sadness. Disappointment. Just kind of a state of disbelief.

"But you then can't cry over spilt milk so quickly you turn your attention to Stoffel [Vandoorne]'s car, and seeing what we learned there."

Pushed on whether he felt that there were any grounds to believe that Honda's situation was improving after increasing reliability trouble, Brown said: "I don't know that reliability is getting worse because we haven't had much reliability yet.

"It is essential that Honda continues to revise their approach to get more power and more reliability in the back of their car, and I believe they are working hard at improving the situation." 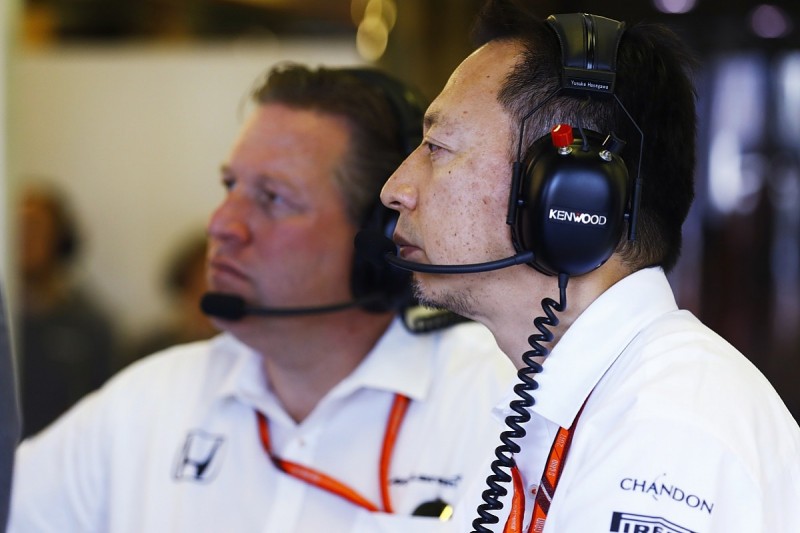 Alonso, who left the track immediately after the problem to play tennis, said he was not shocked about what had happened.

"In a way it is not a surprise," he explained. "We couldn't complete the formation lap on the Sunday in Russia and here we couldn't manage to complete the outlap.

"It was more-or-less expected that we would have these problems right now, so it was a shame because here in front of the home people it's frustrating.

"We've had this year some good Fridays and Saturdays, but bad Sundays as we haven't finished a race yet.

"But this one I have a feeling it will be a bad Friday and a good Saturday, good Sunday."

Honda is still investigating the exact cause of Alonso's failure, and its F1 engine chief Yusuke Hasegawa explained that an order for the Spaniard to stop the car after telemetry data showed a warning came too late.

"The oil pressure dropped completely," explained Hasegawa. "The engineer told Alonso to stop the engine, but it was too late.

"There was a big hole in the bottom of the engine and the oil is missing. I don't know the reason why the oil leaked, but that is the reason why it blew."

One theory being looked at, however, is that the problem could be related to the last time the power unit was used - during qualifying for the Bahrain Grand Prix when Alonso stopped with an MGU-H problem.