Ferrari had set the pace in Friday practice and was well ahead in Saturday morning's final session too, but Hamilton lapped below 1m12.9s for the first time this weekend in Q1 and never looked back.

He was fastest of all in Q2 on a 1m12.496s before smashing through the 1m12s barrier to claim pole in Q3 - matching his hero Ayrton Senna's tally of 65 career pole positions.

Hamilton took provisional pole with a 1m11.791s lap on his first run, before Vettel attempted to respond, falling short by just 0.004 seconds thanks to a wild moment coming out of the Turn 6/7 chicane.

Hamilton then lowered his own benchmark to 1m11.459s on his second run to seal pole, before Vettel shaved 0.006s off his own best time.

Valtteri Bottas was third fastest in the second Mercedes. He was fractionally quicker than Hamilton in Q1 and not far behind in Q2, but was well beaten in Q3, finishing over seven tenths of a second down on his team-mate.

Friday pacesetter Kimi Raikkonen brushed the wall in Q1 and ended up fourth fastest overall in the second Ferrari, complaining of a "really shit" first corner on his quickest lap.

The Red Bulls of Max Verstappen and Daniel Ricciardo annexed row three of the grid, separated by 0.154s, with Verstappen lapping within two tenths of the second Ferrari.

Felipe Massa was seventh fastest for Williams and the only other driver to lap below 1m13s, ahead of Force India pairing Sergio Perez and Esteban Ocon, and impressive Renault driver Nico Hulkenberg, who rounded out the top 10.

Neither Toro Rosso driver made it through to Q3, after a messy session that featured a spin for Carlos Sainz Jr at Turn 1 and Daniil Kvyat glancing the wall at Turn 9 and picking up a puncture.

Fernando Alonso split the Toro Rossos by lapping his McLaren-Honda 12th fastest, only 0.003s shy of beating Kvyat and despite initially complaining of having less power available from the engine than he'd enjoyed in Q1.

Romain Grosjean struggled with a lack of grip from his final set of ultra-soft Pirelli tyres, saying they gave him "absolutely nothing" as he wound up 14th.

Jolyon Palmer was 15th in the second of the two works Renaults, also complaining of "no grip". He was within two tenths of team-mate Hulkenberg in Q1, but struggled badly in Q2, including suffering a brief off at Turn 1. 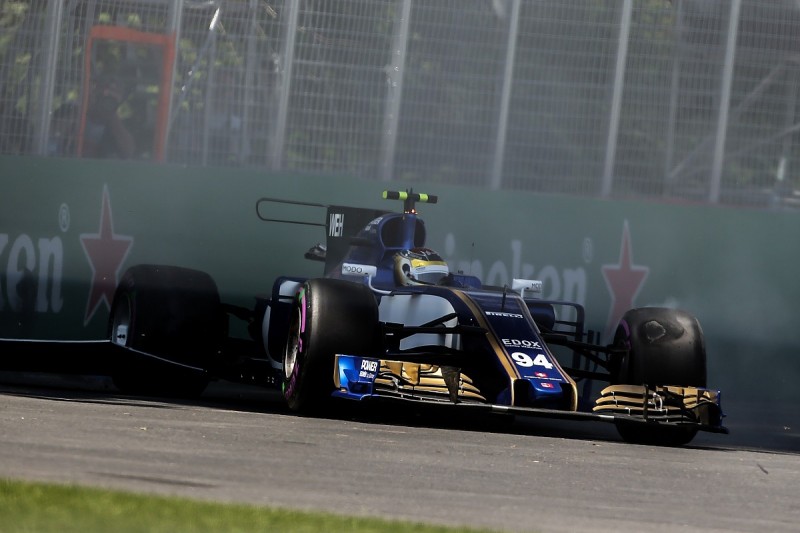 A crash for Pascal Wehrlein's Sauber at the same corner curtailed the climax to Q1, as it forced several drivers to abandon late efforts to improve.

Having complained about being used by his team-mate 'unfairly' for a tow in the second half of the session, Sainz managed to squeak into Q2.

Sainz lapped 0.131s clear of Stoffel Vandoorne's McLaren-Honda, which was eliminated in Q1 for the sixth time in seven attempts this season.

Lance Stroll also failed to escape the bottom five in qualifying for his home race, the Williams rookie finishing the session 0.027s behind Vandoorne in 17th.

Kevin Magnussen complained of encountering traffic "every single lap" as he wound up only 18th quickest, less than two tenths clear of Marcus Ericsson's Sauber.

Wehrlein lapped slowest of all, 0.315s down on Ericsson, and ended up with his Sauber missing its rear wing after he approached Turn 1 on too wide a line and lost the rear of the car under braking.