He also beat Muller to his World Touring Car Championship crown in 2009 when they were factory SEAT team-mates.

He then spent three years in privateer Leons, three further years with Honda and one season at Lada before joining Hyundai as development driver for its i30 N TCR project.

But Tarquini, who is now 56, said he contemplated his future after his 2009 success.

"I have the memory nine years ago walking to this press conference with a world title, and I was thinking to stop racing because what do you want to achieve more than a world title?" said Tarquini.

"It's probably the best time to stop, but walking there I was thinking 'why should I stop, I want to race; I have the adrenaline, I am not very slow, I can compete again'.

"And I decided, because SEAT stopped, to start again with a private team in 2010.

"It was a tough moment but nine years later I was playing for the title again. It's very strange, but sometimes life is very strange." 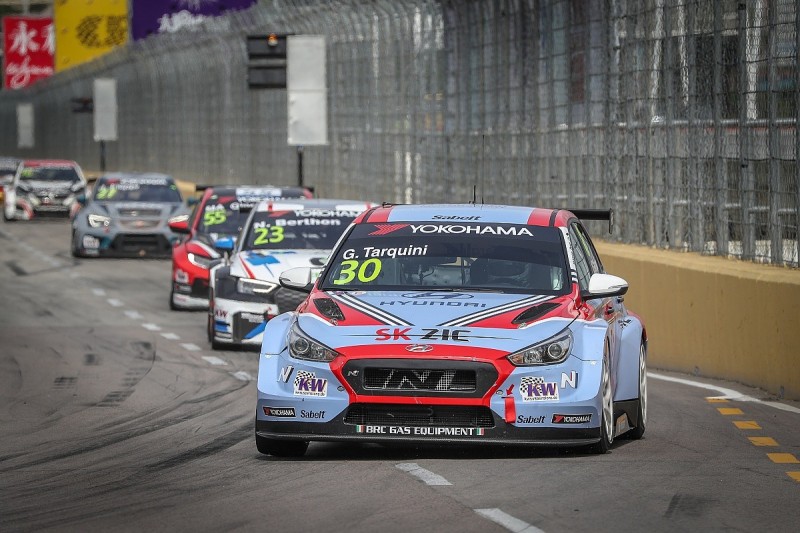 Tarquini started the Macau weekend with a 39-point advantage over Muller, but only qualified 14th for Sunday's two races after crashing at Lisboa.

He was eliminated from the first when he was caught up in a lap-one clash, again at Lisboa, but was out of harm's way in the finale and worked his way into the points.

Although he described 2018 as his "greatest season", Tarquini admitted he made his life difficult by crashing.

"I won the title in the hardest way, by my mistake," he added. "I cannot blame anybody else, it was my mistake in qualifying.

"Without this it would probably have been easier, but with this mistake starting 14th in the second and third race I knew something could happen during the start, because you can see at Lisboa corner anything can happen.

"In the second race something happened because I was in a very good position, I overtook two or three cars [at the start].

"Somebody crashed in front of me, but we were stopping in the middle of Lisboa and they destroyed the back of my car.

"The third race, probably the worst start of my weekend, but I had a little bit more chance to survive in this corner. After the first lap 50% of the job was done.

"It was quite tough because I had Thed [Bjork] behind me, it was quite hard, but the car was much faster than yesterday because yesterday I had some trouble with my car.

"It was tough, but it's even better than if it was easier."

Tarquini is expected to continue with Hyundai in 2019.