Yann Ehrlacher secured his second consecutive World Touring Car Cup title in race one at a sodden Sochi, as Mikel Azcona and Rob Huff scored a brace of wins.

In race one, Azcona engaged in a thrilling wet-weather battle with Huff and the Comtoyou Audis of Gilles Magnus and Frederic Vervisch, the latter needing victory to keep his slender title chances alive in the partially reversed-grid opener.

But Jean-Karl Vernay made a demon start from the second row to split early leader Magnus and Vervisch, as Esteban Guerrieri’s own title challenge ended in a big lap-one crash when he ran wide at the long Turn 3 and smacked into a barrier.

Following a safety car intervention, racing resumed on lap four when Vernay passed Magnus for the lead with a run on the inside of Turn 3 – and Azcona and Huff triggered a fraught and thrilling race.

Huff’s race ended in a door-to-door collision with Vervisch, as Azcona worked his way up to second in the closing stages, then pulled a great move on the brakes into Turn 2 to pass Vernay for victory on the last lap.

Vervisch finished third, ahead of Magnus with a third Comtoyou Audi of Nathanael Berthon in fifth.

But it wasn’t enough to stop Ehrlacher calmly securing his second WTCR after a race in which he kept out of trouble to finish where he started in sixth.

In race two, Huff scored his first WTCR victory since his return to the series this year and became the the 12th winner in 16 races in a thrilling finale.

The Briton came from sixth on the grid to win, as two safety car interruptions broke up an incident-filled conclusion to the season.

The first intervention followed directly from the start when Magnus and Honda’s Attila Tassi made contact off the line, the former’s Audi left stranded on the track. 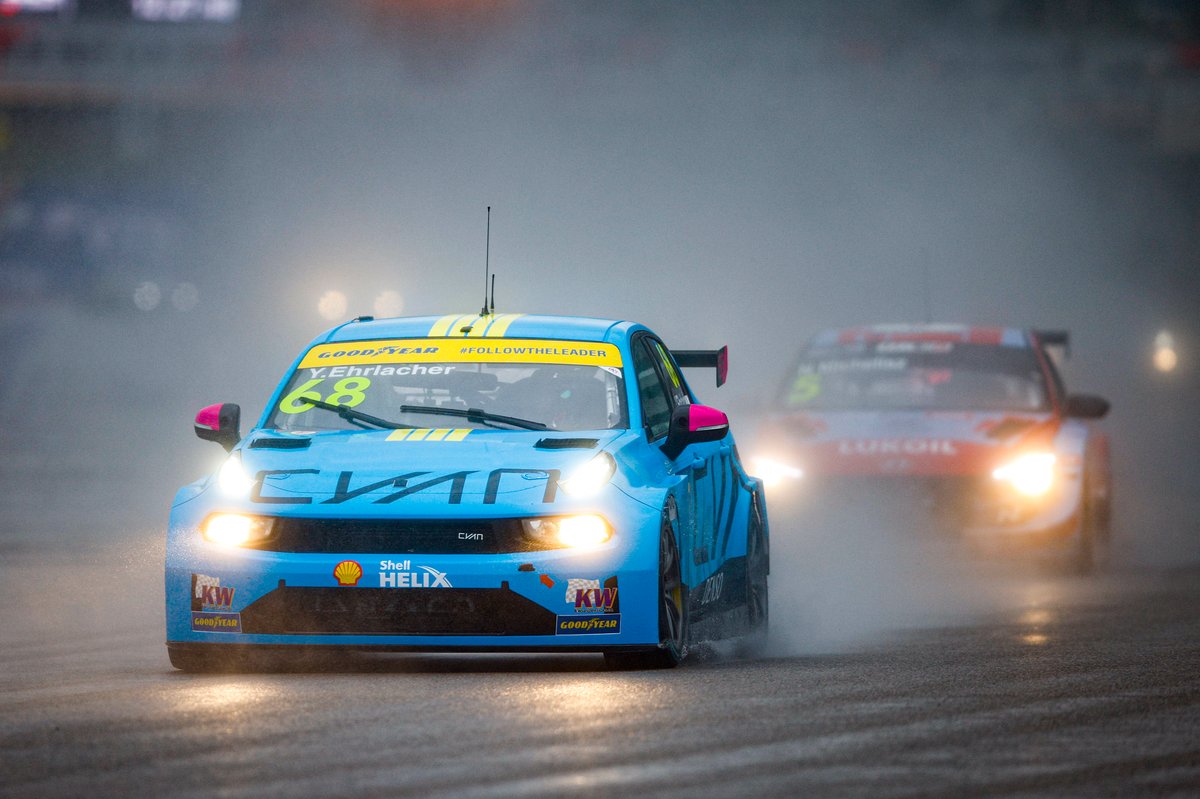 Racing was due to resume on lap four, but then pole position starter Yvan Muller slammed into the back of leader Azcona at the penultimate corner as the safety car returned to the pits. The impact left both out of the race.

As Nestor Girolami led the restart, Cupra driver Bence Boldizs and Lada local entry Kirill Ladygin collided at Turn 3, the Hungarian walking away from a big impact which once again neutralised the race.

When the action finally got under way on lap seven, Huff chased down Girolami and took the lead with a fine move at Turn 13.

He then stretched a gap to win from Vervisch, who passed Girolami on lap 10 and secured second in the points standings behind new champion Ehrlacher.

Nathanael Berthon completed the podium, while Tassi survived his start clash with Magnus to finish fourth from 12th on the grid. Jean-Karl Vernay was fifth, with new champion Ehrlacher scoring his second sixth place of the day.

Gabriele Tarquini’s WTCR career ended in disappointment. The 59-year-old Italian, who has announced his retirement, started race two in 15th and ran into the back of fellow veteran Jordi Gene on lap eight.

Heavy front-end damage forced Tarquini out of the race.