Catsburg deposed polesitter Michelisz from the lead after starting alongside him, but the privateer Citroen of Rob Huff ran side by side with the Volvo initially.

The two touched on the entry into the first corner, with Huff almost pitched into a spin and allowing Michelisz back into second.

Michelisz's Honda was running with 70kg ballast as opposed to Catsburg's maximum amount of 80kg but the Volvo had the edge on pace and pulled clear.

With Michelisz unable to provide a challenge and playing an unlikely rear-gunner to the race leader, Catsburg bolted clear to win by over three seconds and take the championship lead. 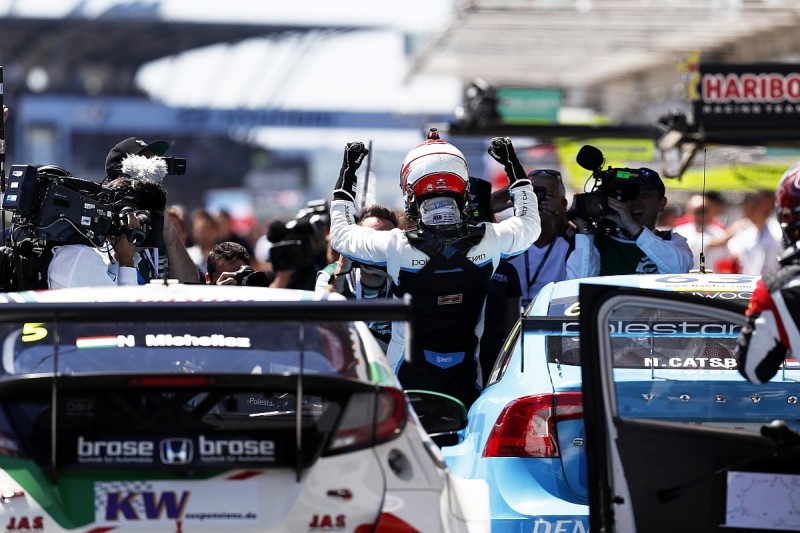 Monteiro was forced to start from the pitlane as the repairs following his race one puncture went beyond the time limit and he could only finish 13th after battling through the European Touring Car Championship field.

Huff made it a double podium in third, having had to hold off a late challenge from race one winner Thed Bjork as a train of cars grew behind him.

Tom Chilton finished behind the Volvo in fifth, leaving Mehdi Bennani to a lonely sixth place.

There was an all Chevrolet battle for seventh with ROAL's Tom Coronel narrowly holding off the Campos Racing-run car of Esteban Guerrieri in a close moment at the Mini Karussell.

Ninth fell to Yann Ehrlacher after he slipstreamed his way past the Sebastien Loeb Racing Citroen of John Filippi.

Polesitter for race one Nestor Girolami did not take part, with car damage following his crash in the reversed grid opener ruling him out.