Bennani profited from a slow start for Nestor Girolami to advance from fourth into second through the first corner, having also cleared the Campos Racing Chevrolet Cruze of Esteban Guerrieri as he was baulked by the sluggish Volvo of Girolami.

The Moroccan then cleared polesitter Ryo Michigami before scampering away at the front.

He extended a lead of more than four seconds in his independent Citroen C-Elysee before serving his joker lap midway through the race, and emerged with two seconds still in hand when the order finally shook out.

Though home favourite Tiago Monteiro was able to reel in the leader in the second half of the race, he only got within a second on the final lap as Bennani cantered home comfortably enough to his second victory of the season.

Runner-up Monteiro gained the most from the joker lap format to reclaim the lead of the championship.

Monteiro made a strong start to jump up to fourth on the opening lap, and opted to serve his joker lap - the format being used in the championship for the first time in Vila Real - on lap four.

The Honda driver held his position as Thed Bjork followed him through the joker, but that crucially gave him a clear track to hunt down and catch Michigami and Girolami before the pair took their jokers.

Monteiro then overtook the two for second when they served their jokers at the end of lap seven, with the result promoting him back into the lead of the championship. 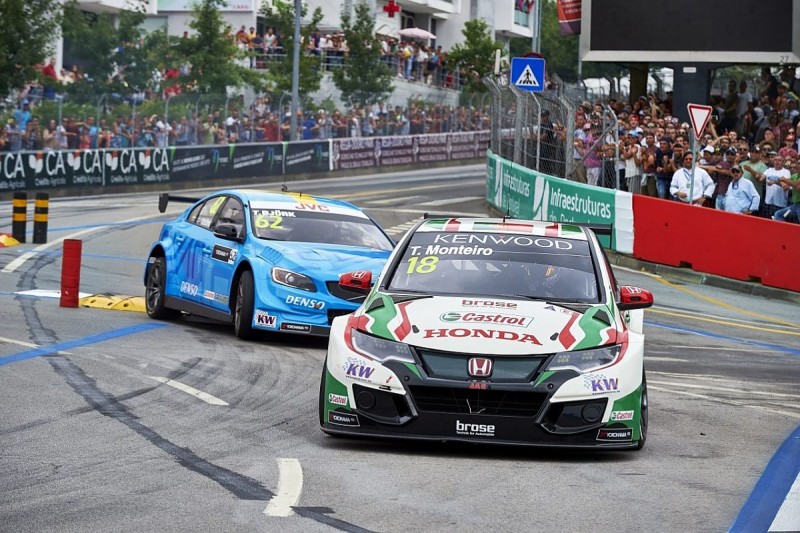 Bjork followed Monteiro as closely as he could and took his second podium finish of the season in third, having overtaken Tom Chilton through the joker lap phase.

Erstwhile championship leader Nicky Catsburg pulled off a rare on-track overtake when he caught Michigami napping out of the downhill chicane in the final sector late on to take fifth, and was followed through by the Munnich Motorsport C-Elysee of Rob Huff.

Main race polesitter Norbert Michelisz came home seventh ahead of Girolami, who was the biggest loser through the the joker lap phase.

Having been bottled up behind Michigami, Argentinian Girolami initially emerged from his joker in sixth but was forced to cede that place to Huff through the slow right-left kink at the start of the lap and was then passed by Michelisz off the corner.

He gained one place back when Michigami pulled over with a front-right puncture, but could only manage eighth and was forced to hold off the eading RC Motorsport Lada Vesta of Yann Ehrlacher.

All 13 finishers managed to serve the joker lap without incident, with teams approving a Sunday morning change to the exit after initial concerns were raised over safety.