Neuville produced a measured drive in his Hyundai Motorsport i20 over the afternoon’s first two stages, extending his rally lead over Toyota’s Takamoto Katsuta to 35 seconds.

However, just when the drivers appeared to be finding their feet on Kenya’s tough gravel roads, heavy rain hit, punishing the latter runners on the final 31.04km stage.

Neuville took risks, and while he lost 35.1s to stage winner Dani Sordo (Hyundai), he in fact ended the day with a 57.4s overall lead over Katsuta, but the complexion of the podium changed dramatically.

Sebastien Ogier claimed third from Ott Tanak after the Hyundai driver was forced to stop to clear his misted up windscreen, and lost a minute in the process.

Ogier is now only 18.1s behind team-mate Katsuta, but more importantly 1m05.7s ahead of Tanak.

M-Sport’s Gus Greensmith ended the day fifth, and within reach of Tanak, while team-mate Adrien Fourmaux was sixth. Kalle Rovanpera, Elfyn Evans and Sordo completed all six stages today under restart regulations after retiring on Friday.

Ogier began the afternoon where he left off claiming his third straight stage win as the crews navigated through the Elmenteita stage for the second time today.

The Frenchman was 2.1s faster than Tanak on stage 11 while rally leader Neuville was 1.4s further back after he lost five seconds by braking to avoid a zebra in the middle of the road.

Incredibly it was the second time zebras interrupted his run on the stage having appeared at roughly the same point during the first run through the test.

"I had a nice clean stage, but I had to brake in the longest straight of the stage to avoid the zebra in the middle of the road. Other than that, it was a nice clean run,” said a frustrated Neuville.

Despite losing time to wildlife, Neuville increased his lead over Katsuta, who continued to lose time to Tanak and Ogier and the battle for the podium places tightened once again. 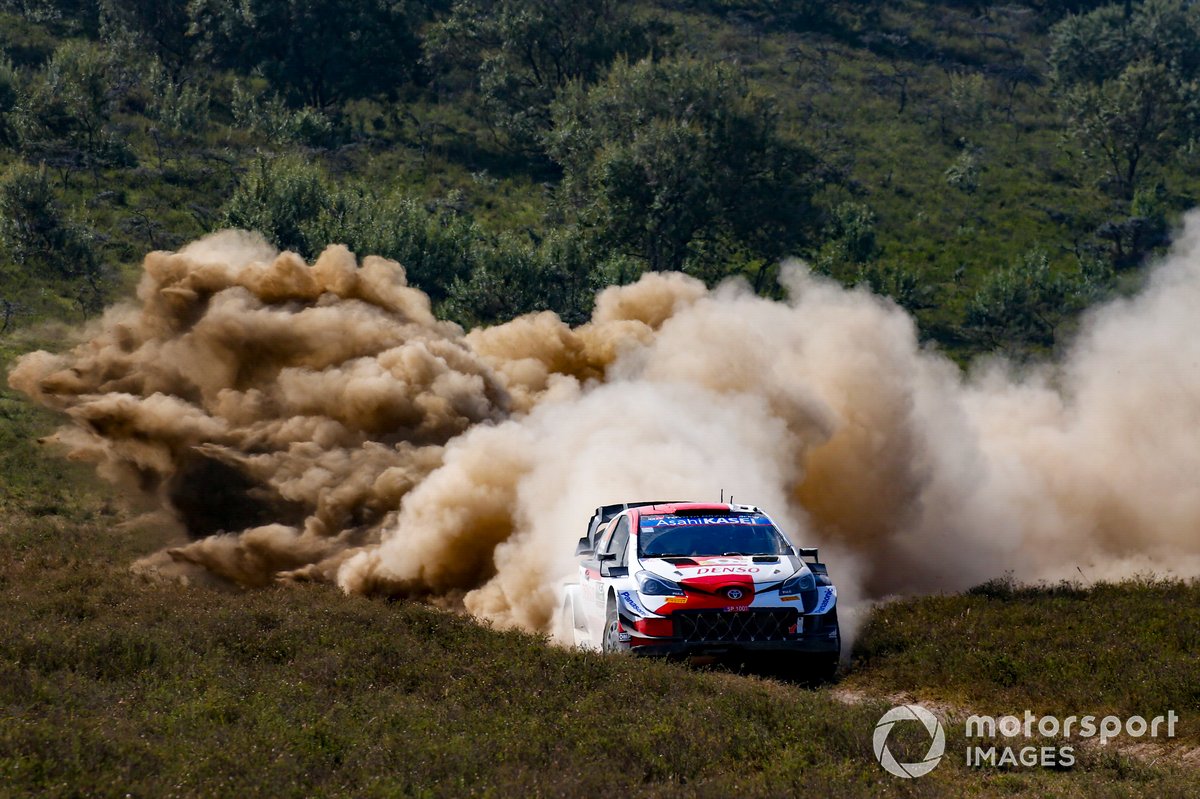 Tanak scored his first stage win of the event after he mastered stage 12 ending Ogier’s run of win, pipping the Frenchman by a second.

Crucially the Estonian took a sizeable chunk out of the margin between him and second overall as Katsuta dropped 7.8s to his Hyundai rival. The gap between the pair was cut to 14.5s.

M-Sport’s Greensmith produced his best drive of the rally to secure the third fastest stage time, only 5.1s adrift of Tanak.

Rally leader Neuville was fourth quickest and increased his overall lead, finishing the stage under darkened skies as rain threatened to add a further challenge to proceedings.

The threat soon turned into reality as a couple of cloudbursts drenched large sections of the final stage of the loop, causing havoc for the leading contenders.

Sordo, Evans, Fourmaux and Rovanpera escaped the worst of the conditions and finished in that order on the timesheets.

Ogier emerged the best of the runners that copped the slippery roads, and despite being 24.6s off the pace, he actually vaulted ahead of Tanak to third overall.

Tanak was left to rue a broken drivers side heated windscreen which required the Hyundai driver to stop, get out, and clean the windscreen to improve his visibility.

"My side of the screen was not working. I couldn't see. It's amazing - the quality is amazing,” said Tanak.

Katsuta also haemorrhaged time during the stage he described as “scary” but managed to hold onto second overall.

"Very scary! I never feel that kind of feeling. In the beginning it was okay, but suddenly a storm came and in the rain I couldn't see anything,” said Katsuta.

Fifth-placed Greensmith was less lucky as he suffered an off but was fortunate to recover and reach the stage end.

The rally concludes on Sunday with a further five stages, beginning at 0526 BST.