Thierry Neuville withstood attacks from Andreas Mikkelsen and Esapekka Lappi to maintain his Rally Sweden lead on Friday afternoon, and will start Saturday heading a Hyundai 1-2-3

Toyota driver Lappi had taken second from Mikkelsen on the afternoon's Hof-Finnskog opener and closed to within 2.1 seconds of Neuville in the process.

But Lappi then slid off the road on the following Svullrya stage, filling his Yaris's air intake with snow and leaving it limping in low-power mode for the stage's final miles. That dropped him to seventh.

Mikkelsen was quicker than Neuville on that stage and got his team-mate's lead down to just one second.

Neuville responded, getting substantially more speed out of the conditions than those immediately before him in the running order throughout the afternoon, and rebuilding his advantage to 4.9s by the end of the loop.

The afternoon's stage wins were shared between Craig Breen and Hayden Paddon as they advanced towards the podium positions.

Breen took third from Citroen team-mate Mads Ostberg on the day's penultimate stage, as Ostberg struggled more with his set-up on the second run through the stages on his first event in the C3. 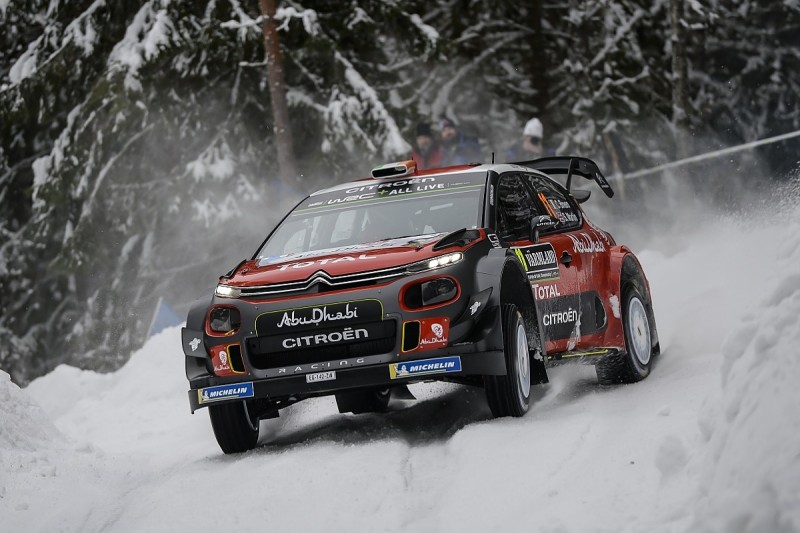 But Breen then ran wide on the concluding Torsby stage, and fell back to fourth as Paddon went quickest and jumped from fifth to third.

Just 1.1s cover Paddon, Breen and Ostberg in third to fifth places, with Teemu Suninen the only M-Sport driver in the top 10 in sixth ahead of the recovering Lappi.

The top four in the start order - Sebastien Ogier, Ott Tanak, Jari-Matti Latvala and Kris Meeke - all had varying degrees of misery in the conditions, struggling with loose snow, growing ruts in the stages, and lines left by the historic rally competitors that had run in the lunchbreak.

Ogier was particularly furious, and lost 50s on Svullrya alone with a problem he declined to explain at the stage end.

By the end of the day he had been passed by M-Sport team-mate Elfyn Evans, despite the sister Ford having had a puncture in the morning, and was 2m48s off the lead in 12th.

That means Ogier will face similar start order misery on Saturday, when only Henning Solberg - driving cautiously on his WRC return in Ostberg's private Ford - is set to be ahead of him on the road.

Latvala, Tanak and Meeke drifted increasingly far away from the rest of the field in eighth to 10th places.

Tanak apologised to the organisers for saying they could "screw themselves" in the morning, admitting he had "over-reacted" in his criticism of how little snow had been cleared from the stages.