Latvala inherited the lead when Thierry Neuville crashed out on Saturday's last stage, for the second WRC event in a row.

Hyundai's Neuville hit a post in Monte Carlo, breaking his suspension, and made contact with a concrete block on Saturday's superspecial in Karlstad, while more than 40 seconds clear with only three stages to run.

With Neuville out, what had been an intense battle for second was promoted to the lead fight, with Latvala in top spot ahead of M-Sport's Ott Tanak and Sebastien Ogier.

Despite Saturday's loop being shortened due to concerns over high speeds, Tanak made the most of running further back on the road.

He was fastest on all three of the morning stages, and had cut Latvala's advantage from 21.6s to 3.8s by the end of Saturday.

After sweeping stages as first car on the road on Friday, Ogier also joined the battle, and started Sunday 16.6s behind Latvala.

But two rapid times from the Toyota driver on Sunday morning extended his lead to over 20s before the powerstage.

Conversely, Tanak suffered with a loose rear end on his Fiesta and team-mate Ogier fell out of the fight with a spin at the first corner of the first stage on Sunday.

Latvala won the powerstage to grab an extra five championship points and finish with a margin of 29.2s in Toyota's first WRC victory since Didier Auriol won Rally China in 1999.

Tanak took second, and a second successive podium to start 2017, while Monte winner Ogier grabbed third and points for second on the powerstage. 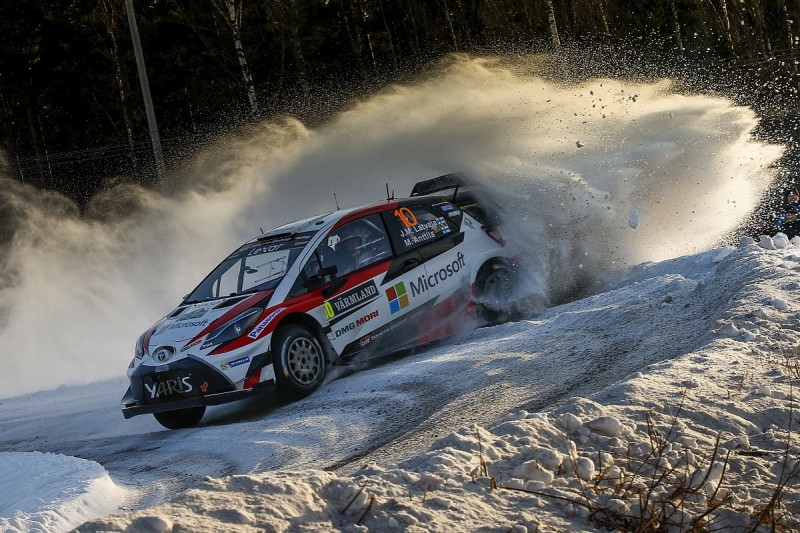 Latvala leads the championship by four points over Ogier after two rallies.

Kris Meeke would have been on for fourth, but he crashed out of contention on Saturday afternoon, after also finding trouble in Monte Carlo.

A crest had unsettled Meeke's Citroen before the low-speed left-hander and he dropped to 12th in the final order but did take fourth on the powerstage to secure two points.

Dani Sordo managed a sensible weekend, his only worry the distraction of a net falling from the roof of his Hyundai on one of Friday's afternoon stages.

He headed Craig Breen, who was struggling for confidence in his first event aboard Citroen's 2017 car but finished fifth for a second consecutive rally.

Elfyn Evans hit a bank and suffered a puncture on Friday, then had an engine issue on Sunday morning, but still held off Hayden Paddon for sixth.

Paddon struggled with his Hyundai on Friday morning, but a change at service unlocked the Kiwi's pace.

A powersteering problem led to what Paddon described as "wrestling a 400lb lion" on Saturday, but with that resolved he closed on Evans and claimed a point on the powerstage.

Stephane Lefebvre was the highest placed 2016-spec car in eighth, on only his second visit to Sweden.

Mads Ostberg struggled on his debut in a 2017 car in his privately-run Ford Fiesta WRC.

The rear wing came off the car on Friday, forcing him to drive two stages with limited rear downforce.

He continued and with that rectified set top 10 times on his way to 15th.

Latvala's Toyota team-mate Juho Hanninen hit a tree on Friday and a bridge on Sunday in a contrasting weekend to the rally winner.