The Welshman won two of the morning's three stages in changing road conditions to hold a lead of 7.9s over Rovanpera, who impressed in the second Yaris WRC.

Reigning WRC champion Ott Tanak - bouncing back in Sweden from an enormous crash on the season-opening Monte Carlo rally - sits just under a second further back from Rovanpera in third, having lost time on the first pass of Nyckelvattnet (SS4).

Higher ambient temperatures have meant that road conditions varied substantially throughout the morning.

Most crews experienced a lack of grip at the end of stages, because the studded tyres designed to provide grip in snow are being pulled out of the tyres by the gravel based stages.

Evans, partnered by Scott Martin, was the quickest out of the blocks and ended with the fastest time, some 1.1s quicker than Tanak and nearly three seconds better than team-mate Sebastien Ogier.

Monte Carlo winner Thierry Neuville was first on the road in his Hyundai i20 WRC but admitted that he "struggled to find the confidence" on roads which featured more gravel than snow sections.

It was a similar tale for Ogier, who said that he was "cautious" towards the end of the stage as braking areas became more unpredictable to judge.

Tanak was then quickest on the first Finnskogen test and took 0.9s out of Evans' advantage, but the latter responded on SS4, beating Tanak by an impressive 8.5s. 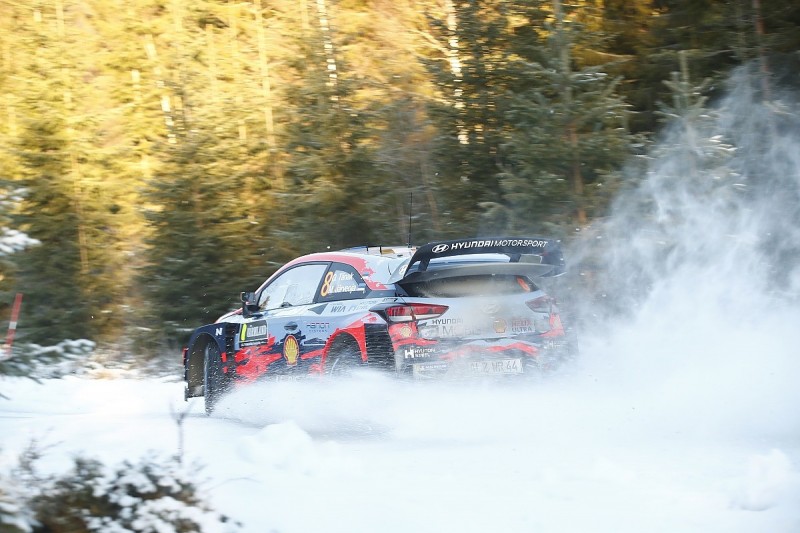 That loss of time for Tanak on Nyckelvattnet allowed Rovanpera to move into second place; the Finn amazed even Toyota team principal Tommi Makinen.

"Incredible performance from Kalle, such good speed, especially on that last [stage]. I think there is a lot more he can learn about the car and I'm sure he can find even more speed during the rally," Makinen told WRC All Live.

Behind the top three, Ogier holds fourth, but is some 16.4s adrift of Evans, while M-Sport's Esapekka Lappi enjoyed a promising opening loop in his Ford Fiesta WRC and is fifth, just 3.8s behind Ogier.

Neuville has to settle for sixth at the moment for Hyundai, but the championship leader is only 5.6s behind Ogier.

Craig Breen is one place behind team-mate Neuville on his first WRC appearance since Rally GB last year, with the Irishman 6.3s ahead of Teemu Suninen's M-Sport Fiesta.

Takamoto Katsuta is the slowest of the factory WRC runners in ninth, but the Japanese enjoyed a far smoother morning than returnee Jari-Matti Latvala.

Latvala - four times a winner in Sweden and running a privateer Yaris WRC this weekend - suffered a half-spin on the second stage of the day and incurred a technical issue soon after.

The Finn has an engine cut-out problem which has dropped him well outside the top 10.

WRC 3 runner Emil Lindholm is the best of the R5s as he heads leading WRC2 (the R5 category for works' teams) driver Mads Ostberg by 5.5s. Jari Huttunen is Lindholm's closest challenger in WRC3, while Ole Christian Veiby is just 6.5s adrift of Ostberg in WRC2.