The Belgian was caught in ruts at a right-hand corner early in the 1.2-mile test and rolled his Hyundai, which ended up on its roof.

The shakedown was stopped while the car was recovered, but Neuville will not have time for another run before the season's penultimate WRC round gets underway in Barcelona on Thursday evening.

"It was a square right," Neuville told Autosport. "The car started to lift, so I tried to steer out.

"But it knocked the tyre off the rim, the rim was caught in the rut and we started to roll. It was [at] very, very slow speed."

Neuville said the incident would not affect his performance on the Salou-based event.

"It [shakedown] counts for nothing," he added. 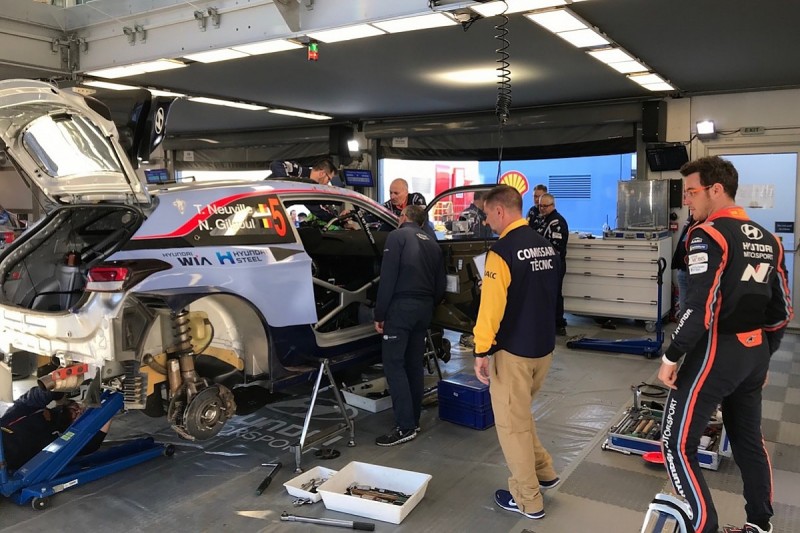 "The boys will fix the car and we try to make a better start tonight. The damage is to the windscreen, a steering arm and maybe we need a radiator."

Ogier was three tenths faster than Toyota's Jari-Matti Latvala while another Finn, Teemu Suninen, was third-fastest in his M-Sport Ford.

Sebastien Loeb, who is making his final appearance of the season for Citroen in Spain, was fourth in his C3 WRC. The nine-time world champion was 1.1s off Ogier's benchmark.

Hyundai has pinned its hopes of an improvement in form on an update introduced in time for this weekend's rally.

While Neuville holds a seven-point lead over Ogier in the drivers' standings, early-season dominator Hyundai has slipped 20 points behind Toyota in the makes' race.

Hyundai, which last won with Neuville in Sardinia in June, has brought new parts to Spain that include geometry and transmission changes aimed at improving the car's performance on asphalt.

Understeer has dogged the i20 for much of this season, but Neuville is confident his team is on top of the issue.

"We know we have had some deficiencies on Tarmac this season, but we have worked hard on that and hope we can see the fruits of that hard work," said Neuville, speaking before his shakedown crash.

"These two final rallies of the season are massively important for us in the championship fight.

"We have lost some ground in the past couple of events, but we are still on top and we won't give up without a fight."

M-Sport is believed not to have brought its latest engine upgrades. The British team will complete further testing with the parts before introducing them at the final round in Australia.

Rally Spain starts with an all-asphalt run around Barcelona's Montjuic Park on Thursday evening, before the first full day of gravel action on Friday.

Teams will then completely change set-ups on Friday night, with a weekend of asphalt action ahead of them in the WRC's only mixed-surface event.

Loeb: Pretentious to think I can take on WRC title hopefuls in Spain