Having spent Friday on routes around the Monza circuit, the field completed its first loop of mountain road stages on Saturday.

Ogier immediately threw down the gauntlet in mixed conditions to take the lead as he attempts to claim his seventh WRC drivers' title and his first with Toyota.

Snow had been anticipated on the roads in the Bergamasque Alps, nicknamed 'Monza-Carlo', but largely failed to materialise with event organisers clearing much of the previous week's build-up and torrential rain turning patches at high altitudes to slush.

Ogier won the first stage of the day by 8.3 seconds to move ahead of Hyundai's overnight leader Dani Sordo.

The Spaniard closed the gap by winning the second stage of the morning, but dropped back on the third, which was won by Toyota's current drivers' championship leader Evans.

Ogier thus leads Sordo by 6.7s, with Evans in third 7.5s in arrears.

Following the retirement of Hyundai's Thierry Neuville during Friday's stages, the drivers' title is effectively a battle between the Toyotas of Evans and Ogier with the Welshman needing to finish in fourth place or higher to take the title if Ogier wins the rally.

Only defending WRC champion Ott Tanak still has a mathematical chance to beat the Toyota drivers. However, the Hyundai driver needs to score maximum points and for Evans and Ogier to both retire and is largely focused on Hyundai's push for the manufacturers' title.

As it stands Toyota would also win the WRC manufacturers' championship by three points. 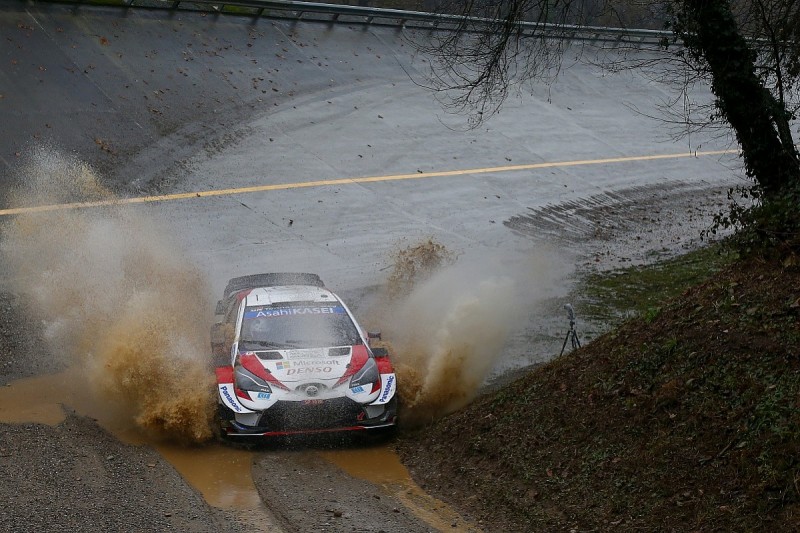 "It's been a very good opening stage for us," Ogier said. "The second stage was not good, basically I was much too careful to try to save my tyres and lost five seconds there which was too much for such a short stage.

"We didn't really manage the tyre pressure in the first stage, we had a bit too much tyre wear, and that's why then I decided to be a bit more safe in the second stage; but overall we are fast throughout the loop so it's still a good position."

The rest of the WRC's championship battles will be decided this weekend, with WRC2 being fought out between Mads Ostberg's Citroen and Pontus Tidemand's Skoda.

The Swedish Skoda driver has one event in hand and will have to drop his lowest score. He currently sits one minute behind his Norwegian title rival, who is in a must-win battle with M-Sport's Adrien Fourmaux at the front of the class.

The top two men in the WRC3 standings, Hyundai's Jari Huttunen and the Citroen of Marco Bulacia Wilkinson respectively sit fourth and fifth in their class, which would hand the title to Huttunen. At the top of the leaderboard are WRC refugee Andreas Mikkelsen and rising star Oliver Solberg, son of 2003 WRC winner Petter.

The morning loop will be repeated by all classes through the afternoon before a final blast around Monza circuit this evening closes the final full day's action.