Nine-time world champion Loeb secured his first stage victory since Monte Carlo in 2015 by setting the fastest time on SS7 (El Chocolate 2) before doubling up on the second pass through Ortega.

The Frenchman jumped both Citroen team-mate Kris Meeke, who suffered spins on both SS7 and SS8, and Ott Tanak to lie just 7.5s off Sordo heading into day two.

The afternoon's stages were a punishing test for the WRC field, with a number of leading runners hitting trouble.

Elfyn Evans withdrew from the event after co-driver Daniel Barritt suffered a concussion in a high-speed accident on the first run of Ortega. The M-Sport Ford Fiesta WRC was driveable after the sizeable incident but the pair pulled out on safety grounds.

Toyota endured a miserable day despite Tanak taking the fight to Loeb and Sordo with victory on the SS9 superspecial as night fell. High engine temperatures forced the team to switch off its Anti-Lag System (ALS), resulting in a significant loss in power for its drivers.

Esapekka Lappi had an off on SS7 and failed to complete the stage while team-mate Jari-Matti Latvala fared little better, retiring on the road section after his alternator failed following SS8. Latvala will return for Saturday's stages. 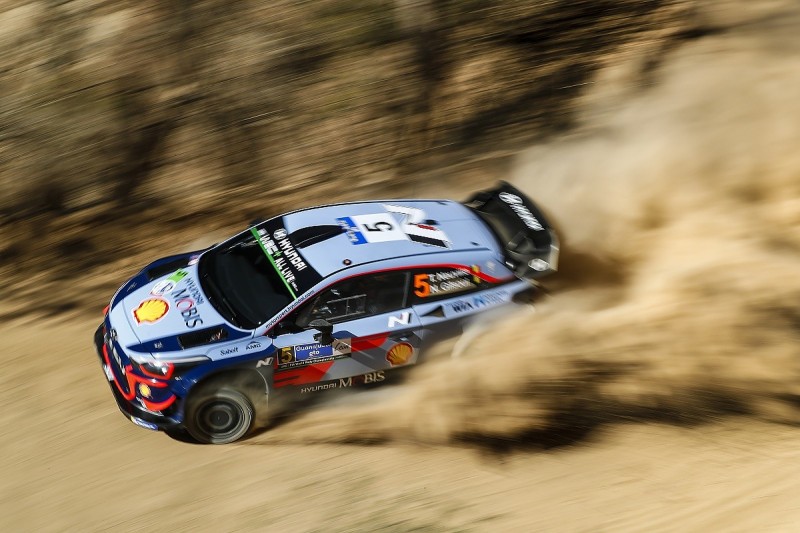 There was also drama for championship leader Thierry Neuville. He suffered a loss of fuel pressure in his Hyundai i20 prior to SS5, the Leon street stage. Neuville tried to remedy the issue by opening the door to gain access to the fuel bypass valve behind his seat, but the door slammed shut on the Belgian's arm, causing bruising.

A further loss of power steering on SS8 means Neuville lies in eighth place and faces an early starting position on day two.

Out front Sordo - running 10th on the road - continued to put in fast stages times to extend his advantage over first Meeke and then Tanak.

Loeb and Tanak's stage wins bring them to within 7.5s and 11s respectively of the Hyundai driver.

Sebastien Ogier and Andreas Mikkelsen were in a fight of their own in the afternoon, with the pair swapping fifth and sixth positions on three successive stages between SS6 and SS8.

Ogier, courtesy of his SS10 win at the Leon Autodromo, holds a 1.5s lead over the Norwegian.

With Evans already out and the team's third driver Teemu Suninen also crashing on SS7, Ogier is M-Sport's only realistic chance of points from Mexico.

In WRC2, Swede Pontus Tidemand made the most of problems for almost all his rivals and holds a 3m38.3s lead over Brit Guss Greensmith in second.