Mikkelsen kicked off the second loop by pulling another 0.7s over the field on the short Pilbara stage, before being beaten for the first time all day on the second pass through Eastbank, where Hyundai team-mate Neuville edging the leader by a just tenth.

He then bounced back on SS6, beating Neuville by 1.7s to extend his lead out to 20.9s with only the superspecials left to run on Friday.

"It has been really amazing today and I'm really enjoying my third rally with Hyundai," said Mikkelsen.

"There are still two stages to go [on Friday evening] but things are looking very good. With these roads and this car I can do exactly what I want."

Just over two seconds separate Meeke and Neuville in the battle for second place, after the Hyundai driver was quicker over all three stages. 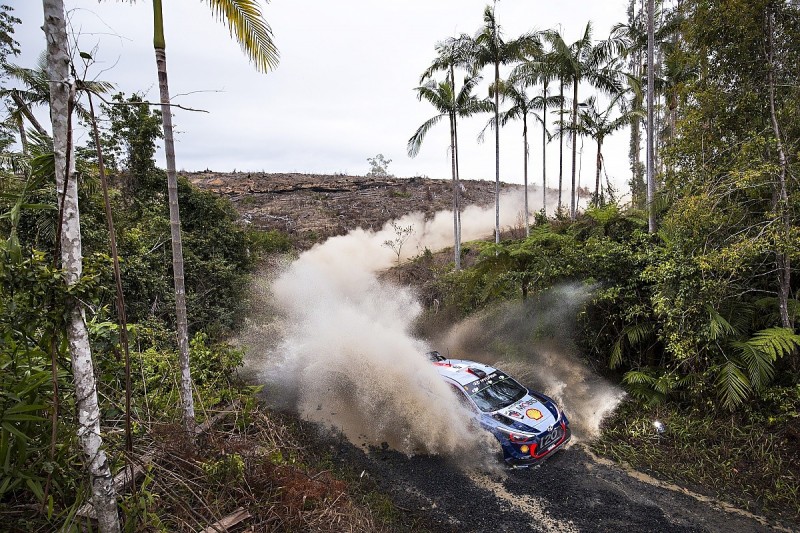 Neuville forced a change in the overall standings by topping the second stage of the afternoon loop, a six-second advantage over Citroen's Craig Breen on Pilbara moving the Belgian into third.

It also moved him to within 2.7s of Meeke in second ahead of the day's final full-length stage, that gap further reduced to 2.2s after Neuville was slightly quicker on the 16-mile Sherwood.

Jari-Matti Latvala made up two spots with the equal second best time on the final stage, which helped him jump Tanak and Breen into fourth.

Breen went two spots in the wrong direction, a particularly poor showing on the second pass through Sherwood leaving him down in fifth.

Like his Hyundai team-mates, Hayden Paddon opted to exclusively use the soft tyre across the loop. It was initially beneficial, the Kiwi jumping both Latvala and Tanak in the overall standings with the fourth quickest time on SS5.

But the softs didn't hold up for the sixth stage, Paddon dropping back behind the same pair he jumped the stage before after losing 9s to the leaders.

World Rally champion Sebastien Ogier made what looked to be a promising start to the second loop with the second quickest time on SS4, despite the return of the gearshift issue that first reared its head during the morning's stages.

This time the problem became more and more costly over the longer two stages that followed, and between that and still running first on the road Ogier dropped significant time. It was 11.6s on the second pass through Eastbank, before he lost another 7.1s on the final forest stage of the day.

He now sits eighth, 48.1s behind the leader.