The Finn quickly leapt ahead of Ogier before Evans suffered a crash on Stage 9 that would lead to the Welshman's retirement due to roll cage damage sustained on his GR Yaris.

Rovanpera would also win that stage to jump ahead of chief title rival Hyundai’s Ott Tanak, who ended the day 46.4s shy in third at the end of Saturday.

Tanak was among the trio of Hyundai drivers to suffer a second hybrid boost penalty, which cost the Estonian and his team-mates Thierry Neuville and Oliver Solberg each 10s.

Despite the hybrid boost penalties, Neuville remained fourth across the day while Solberg reached service in fifth having been briefly demoted to sixth due to the penalty.

Solberg was able to recover the lost ground when Toyota’s Takamoto Katsuta crashed out on Stage 12, ending his run of finishing every WRC event this year in the points. 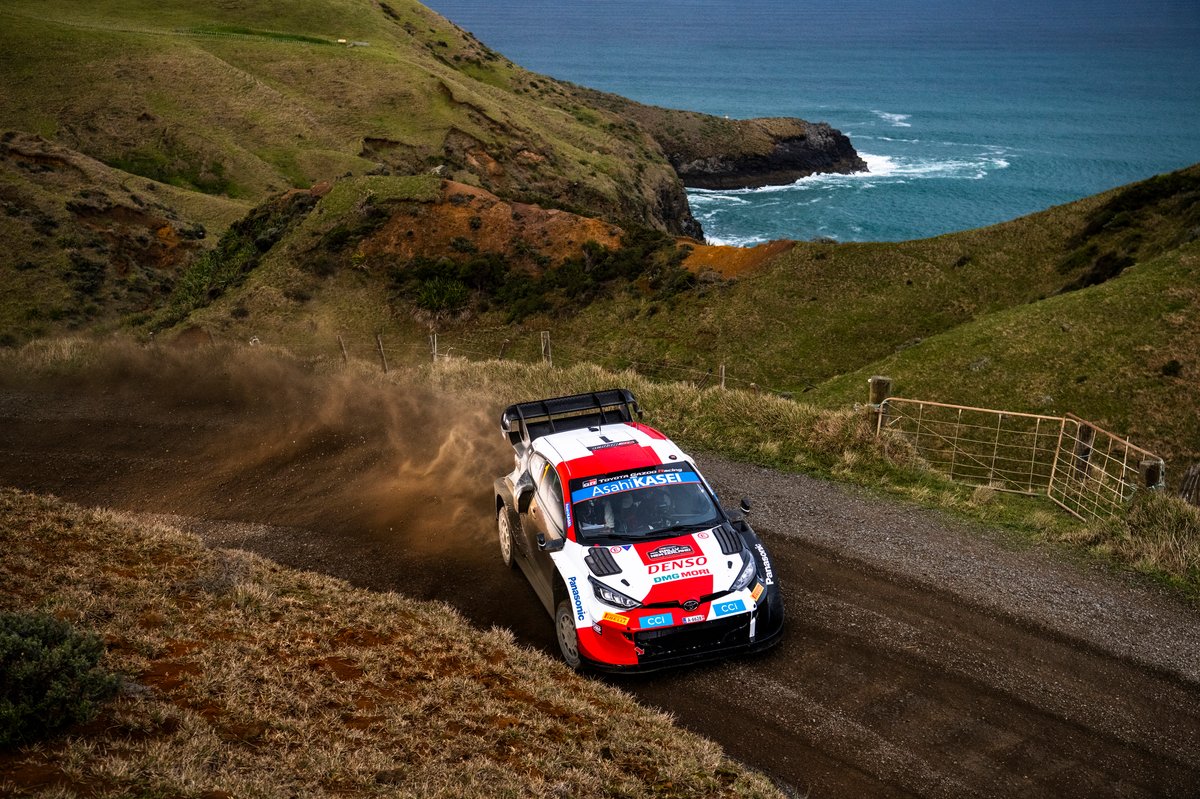 Persistent rain continued to fall heading into Saturday afternoon creating treacherous conditions for the second pass of the morning stages. Aquaplaning from the standing water proved a real problem for crews.

But it didn’t seem to affect Rovanpera as he stormed to his third stage win of the event to date to pull a further 5s clear of Ogier, who moved to second outright after Tanak’s hybrid boost penalty.

Tanak was unable to respond to Rovanpera’s pace, losing 17.9s to leave the Hyundai driver more than half a minute adrift.

Team-mate Neuville was third fastest on the stage while the third Hyundai of Solberg managed to complete the test despite suffering from a misfire.

Rovanpera continued his charge on Stage 12 as the rain began to ease. The Toyota set a blistering pace in the slippery conditions to seal yet another stage win.

Ogier was again his nearest challenger albeit 6.6s adrift but the Frenchman was handed a 10s penalty for checking into the stage a minute late.

However, Tanak revealed that all was not well in his Hyundai after dropping 7.8s on the stage.

“Of course, everything is not okay OK the target is to come through,” said Tanak. “Luckily this stage was more consistent with less muddy places. It's such a shame.”

However, he fared better than Katsuta, who slid off the road and into retirement. The Japanese misjudged a tight left-hander, resulting in his GR Yaris rolling down an embankment. Both driver and co-driver Aaron Johnston were reported to be OK.

The weather closed in for the final stage of the day, which reduced visibility and grip for the latter runners into the short 5.81km test - that was cancelled in the morning due to Gus Greensmith’s crash.

The stage would, however, provide joy for M-Sport as Craig Breen made the most of the better weather conditions to set the fastest time, his second stage win of the event.

Rovanpera backed off in the tricky conditions but was still able to post the second-quickest time, which was good enough to extend his rally lead over Ogier heading into Sunday.

Rally leader Rovanpera only needs to outscore Tanak by eight points on Sunday to become the WRC's youngest-ever world champion.

New Zealander Hayden Paddon heads into the final day with a comfortable 2m04.7s lead over Kajetan Kajetanowicz in WRC2.

Supercars champion Shane van Gisbergen ended the day in third, but witnessed his hopes of reeling in Kajetanowicz fade after picking up a front right puncture in Stage 12.

The WRC crews will contest four more stages, comprising 31.18km, to conclude the rally on Sunday.