Ogier led from the very beginning despite spinning on a chaotic, ice-affected, first stage, but his advantage over 2017 WRC team-mate Ott Tanak yo-yoed across Friday and Saturday.

A spin into a ditch on Friday afternoon meant Ogier only held a 14.9s lead heading into the weekend but he flew out of the blocks on Saturday and demolished Tanak by a minute on the devilishly tricky 18-mile opening stage.

Tanak started to claw back time immediately, and over the course of the day brought the gap down from 1m18.4s at its largest point to 33.5s.

Ogier then repeated his flying start on Sunday, topping the famous Col de Turini SS14 and beating Tanak on the next two stages.

By this point Tanak had settled for second and even though Ogier did not think he had the best tyres for the powerstage, he still did enough to beat Tanak to a bonus point in fifth.

Conservatism crept into the rest of the Toyota camp over the final two days of the event once it became clear third was the best possible result for Jari-Matti Latvala and Esapekka Lappi.

The two were embroiled in a close fight until Lappi ran wide into a snow bank and gave himself a puncture.

That freed up Latvala to run comfortably to a lonely third, while Lappi fought back to fourth after dropping behind Kris Meeke.

Lappi was 18s clear of the Northern Irishman heading into the final run, despite losing several seconds on the penultimate stage after sliding into a snowbank at an icy hairpin.

Meeke's attention had turned to keeping the recovering Elfyn Evans and Thierry Neuville at bay but a stunning run on the powerstage sent him quickest, ahead of both - and it soon got even better for the Citroen driver.

With fourth place in sight, Lappi slid wide on his powerstage run and lost half a minute trying to get back onto the road. 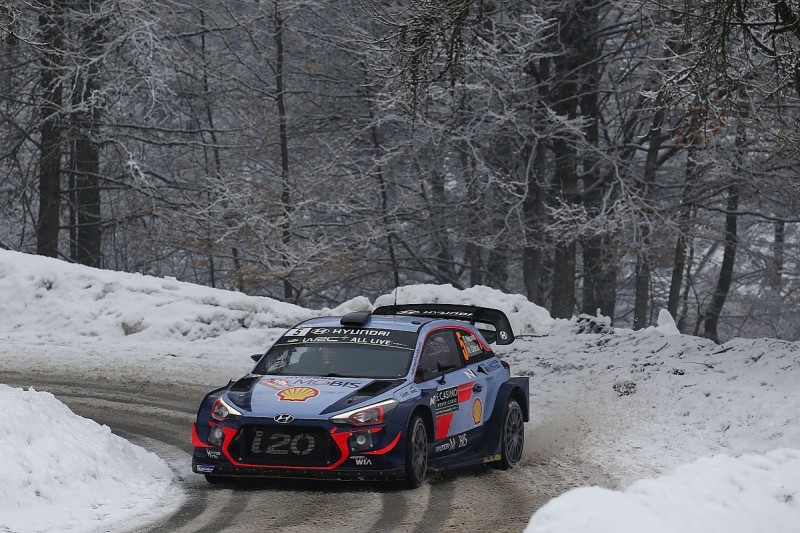 That dropped him behind Meeke, who gleefully inherited fourth and five powerstage bonus points from a "horrendous weekend", but also Neuville and Evans.

Neuville gained two places on the final stage after overhauling Evans, and his unexpected fifth place was reward for Neuville's fightback from sliding into a ditch and losing four minutes on the first stage.

Evans was disappointed to lose out to the Hyundai after staging his own recovery from a puncture and half-spin across the rally's first two stages.

Neuville's fifth place and four bonus points for the second-best powerstage effort also meant Hyundai had more to show from the opening rally than looked likely at one stage.

Dani Sordo was in the final podium position until his rally was ended by an off into a ditch on Saturday's opener, while Andreas Mikkelsen dropped out of contention on Friday with an alternator problem.

He returned under Rally 2 rules and picked up three points with the third-best time on the powerstage.

At the foot of the leading WRC finishers were Bryan Bouffier, who had a spin on the final day, and Craig Breen, whose rally was ruined early with a brake problem.