Thierry Neuville is the unofficial leader of the 2017 World Rally Championship-opening Monte Carlo Rally, after a first night disrupted by a crash for his Hyundai team-mate Hayden Paddon

But Paddon's crash behind meant the stage was cancelled, sending the classification for the rally into disarray.

Not far from the end of the first stage run for the WRC's dramatic new rules package, Paddon crashed on a medium-speed left hander as he lost control on a patch of ice.

A spectator was involved and taken to hospital but Paddon and co-driver John Kennard were unscathed.

Neuville then increased his advantage substantially on SS2, managing a time 7.8s quicker than Ogier to cement his lead.

The order behind is clouded as drivers are likely to receive a notional time for SS1 after they were held up by Paddon's crash or unable to contest the stage at all.

They are likely to be classified in the order they finished SS2, which means Juho Hanninen will hold a shock third place in the new Toyota Yaris after running way down the order.

He was reshuffled behind the WRC2 cars after the SS1 disruption, and made the most of his position on the road. 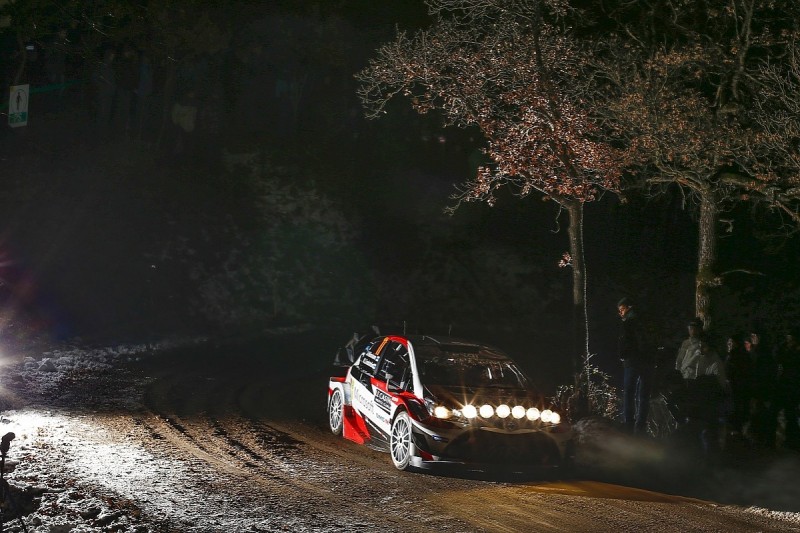 Elfyn Evans - returning to top class WRC machinery with DMACK after a year competing in WRC2 - was also moved back down the start order with Hanninen but could only manage sixth quickest.

Kris Meeke will likely hold fourth in the leading Citroen, showing no sign of worry at Neuville's apparent superiority at stage end.

Ott Tanak - team-mate to Ogier this year - took fifth, reporting difficulty in finding a rhythm on the stage..

Incredibly, Craig Breen completed SS6 less than 10s down on his team-mate Meeke despite still being in Citroen's previous-generation DS3 on this event.

Dani Sordo took eighth on SS2, while ninth-fastest Jari-Matti Latvala rued not pushing hard enough on the icy sections of the tricky test on his Toyota debut.

WRC2 leader Andreas Mikkelsen rounded out the top 10 in his Skoda Fabia R5.