Toyota’s Sebastien Ogier has pulled clear of World Rally Championship rival Sebastien Loeb after a dominant display in an eventful Saturday at the Monte Carlo Rally.

Ogier moved back into the lead after winning two of the three morning stages before a stunning drive on the day’s last test, in tricky snow, ice and dry conditions, catapulted the eight-time champion into a healthy lead.

M-Sport’s Craig Breen ended the day in third overall, 1m26.0s in arrears, having benefited from a drama-filled day for Elfyn Evans, Thierry Neuville and Ott Tanak. A mistake free drive allowed the Irishman haul his Ford Puma into podium positions having started Saturday in sixth.

Hyundai’s Neuville slid down the leaderboard from fourth to sixth after a front right damper issue he was carrying from the morning loop worsened, forcing the Belgian and co-driver Martijn Wydaeghe into making a roadside repair.

Evans remains in the rally but outside the top 10 after his hopes of a podium evaporated following a mistake on the morning’s final stage when he clipped a bank. The Welshman’s car was retrieved after becoming beached position on a hillside.

Tanak retired from the day after suffering two punctures and a crash in the morning. The Estonian may have been able to continue but was carrying only one spare tyre. He could however return to the action on Sunday to compete for Power Stage points.

Toyota’s Kalle Rovanpera will head into Sunday in fourth position, 2m03.8s back, thanks to a combination of raw pace that saw the Finn win both afternoon stages. M-Sport’s Gus Greensmith completed the top five after reaching the end of the day with his misfiring Puma.

The Ogier versus Loeb battle continued as Stage 12 kicked off the afternoon running.

Loeb pushed to the maximum taking 0.4s out of his rival’s lead to bring the gap down to five seconds after the morning’s three stages. 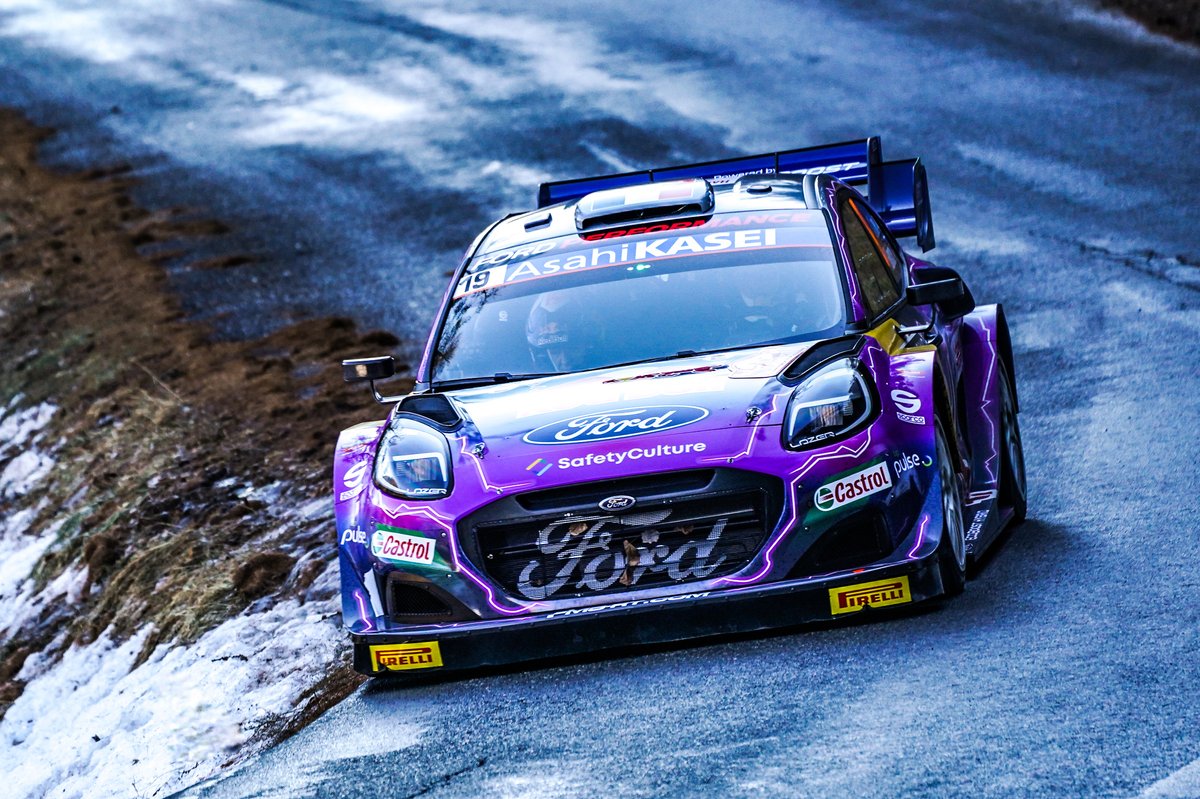 The pair were both beaten by Rovanpera as the Finn claimed his first stage win of the new Rally1 hybrid era, in what was some turnaround in performance compared to his struggles on Friday.

The troubles for Neuville took a turn for the worse as a damper issue he had been carrying broke causing damage to his front right, with the steering strut poking through the bonnet. The Belgian crawled through the stage, dropping 3m40s in the process.

Greensmith was able to nurse his wounded Puma through the stage, while Solberg completed the pass as he continued to fight exhaust fumes coming into the Hyundai’s cockpit.

The final stage of the day, a repeat of the treacherous patchy snow-covered Sisteron stage, proved a critical moment of the rally.

After seeing Loeb opt for soft slicks, Ogier copied his countryman’s tyre choice and it proved an inspired move, as he took 16.1s out of his rival. The drive wasn’t the fastest as teammate Rovanpera won the stage by 5s from Ogier.

The stage again provided, this time Toyota’s Takamoto Katsuta slid into a bank at the same corner where Tanak came to grief in the morning. After a lengthy delay he managed to get going again and reach the stage end, falling from fifth to 13th overall.

Behind, Neuville battled on driving with a cable tie repair on the damper which came undone 3km from the stage finish, forcing him to drop another two minutes.