Tanak and co-driver Martin Jarveoja produced one of the best drives of their WRC careers to tame a Hyundai i20 N, that is short of being the best car in the championship, to defeat Rovanpera on home soil by 6.8s after an intense duel.

The 2019 world champion assumed the lead on Stage 2 on Friday, and from there the Estonian was on maximum attack delivering a string of blistering stages times to fend off a trio of Toyotas competing on the WRC team’s home soil.

Esapekka Lappi headed those chasing Tanak closing to within 3.8s of Tanak on Friday night. However, on Saturday Tanak came under severe pressure from a charging Rovanpera, who opened the roads on Friday.

The Finn rode his own luck at times suffering two wide moments while attempting to reel in Tanak. The 21-year-old made most of tricky wet conditions to ignite his surge up the leaderboard from fourth to second. Five stage wins helped the Toyota driver close to within 8.3s heading into Sunday’s final four stages.

However, Tanak continued to attack, extending his lead over Rovanpera before sharing a stage win for the second time during the event. Tanak then held his nerve over the remaining two stages to deny the Finn a home victory, while Rovanpera claimed the five bonus points on the powerstage to extend his championship lead to 94 points. 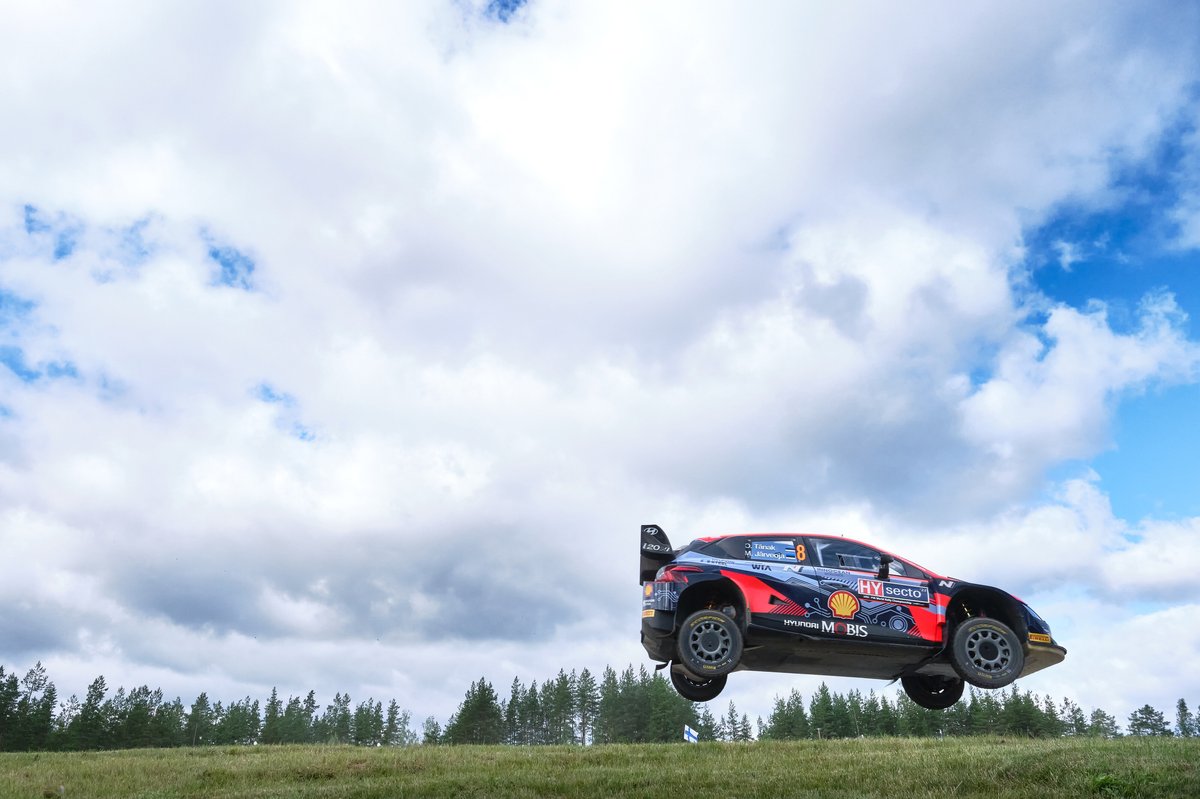 Lappi managed to somehow secure the final podium spot despite rolling his GR Yaris on the penultimate stage. The Finn ran wide into a ditch at a left hander which resulted in his car rolling three times, damaging the rear wing, windscreen and the radiator.

Lappi was able to to recover and lost only 18s maintaining his third position, before stopping by a nearby lake to fetch water to attempt to re-fill and patch up the leaking radiator. This incident followed a freak moment on Saturday that effectively ended his victory hopes when a rock cracked his windscreen, which severely restricted visibility.

Toyota’s Elfyn Evans brought his GR Yaris home in fourth after struggling to match the pace of the front runners for match of the rally. A left rear suspension issues put him out of the fight for a podium on Saturday.

Hyundai’s Thierry Neuville avoided issues but was unable to find the confidence to push in his unpredictable i20 N, and ended the rally 2m18.0s adrift in fifth. Toyota’s Takamoto Katsuta continued his run of finishing every event in the points in sixth, while Gus Greensmith headed M-Sport’s charge in seventh.

Pierre-Louis Loubet appeared on course to finish eighth before an electrical issue struck prior to the final stage, forcing the Frenchman into retirement.

M-Sport team leader Craig Breen had been amongst the front runners until Saturday when he ripped the right rear from his car after hitting a grass bank. The Irishman returned on Sunday.

Stablemates Adrien Fourmaux and Rally1 debutant Jari Huttunen both reached the finish albeit outside of the top 10. Fourmaux lost ground after hitting as rock on Friday before a power steering issue cost him more time.

Huttunen impressed to hold eighth on Friday but a fuel pressure issue dropped him outside the Top 10. The Finn would go on to finish in 10th position.

Hyundai’s Oliver Solberg was the only Rally1 retirement after crashing out on the first corner of Friday’s opening stage.

UPDATE: Suninen has since been disqualified from the event after the front bumper on his i20 was found to be underweight, handing Lindholm the victory. It also means Huttunen has been promoted to ninth.