Hyundai’s Ott Tanak resisted intense pressure from a charging Kalle Rovanpera to cling onto the Rally Finland lead heading into the final day of the World Rally Championship event.

Tanak claimed two of the day’s eight gravel stages but the combination of changeable weather and a rapid Rovanpera provided a tense battle for the lead across Saturday afternoon.

Tanak, the 2019 world champion, started the day with a 3.8s lead over Toyota’s Esapekka Lappi, but ended it with an 8.4s margin over Rovanpera as Lappi's team-mate surged from 21s adrift in fourth to second overall.

The hard-fought head-to head between Tanak and championship leader Rovanpera dominated the afternoon stages as the latter won five tests, and also shared a stage win with his rival while nibbling chunks out of Tanak’s lead.

Hampered by a broken windscreen, Lappi dropped to third and was 35.2s in arrears at the end of the day. Fellow Toyota driver Elfyn Evans won a stage in the morning, but struggled to match his stablemates and lost further ground to a left-rear suspension issue that left him adrift in fourth.

The stages had dried by the time the crews began the afternoon loop, but deep ruts provided an extra challenge. It was a challenge that Rovanpera and Tanak appeared to relish as the pair charged into Stage 15. Rovanpera won that battle, pipping the rally leader by 0.2s after two ultra-committed runs, although it appeared that the Finn may have nudged a tyre slightly off the rim.

Rovanpera’s third stage win of the rally put the Finn within 1.5s of second overall, held by compatriot Lappi, his vision hampered by a cracked windscreen resulting from an errant rock flicked up by his car.

Lappi dropped 1.9s in that stage while Evans shipped 5.3s as the Welshman began to drop out of the lead battle. M-Sport's Pierre-Louis Loubet emerged as the best of the rest by clocking the fifth fastest time, while Neuville elected to take a sensible approach in fifth. 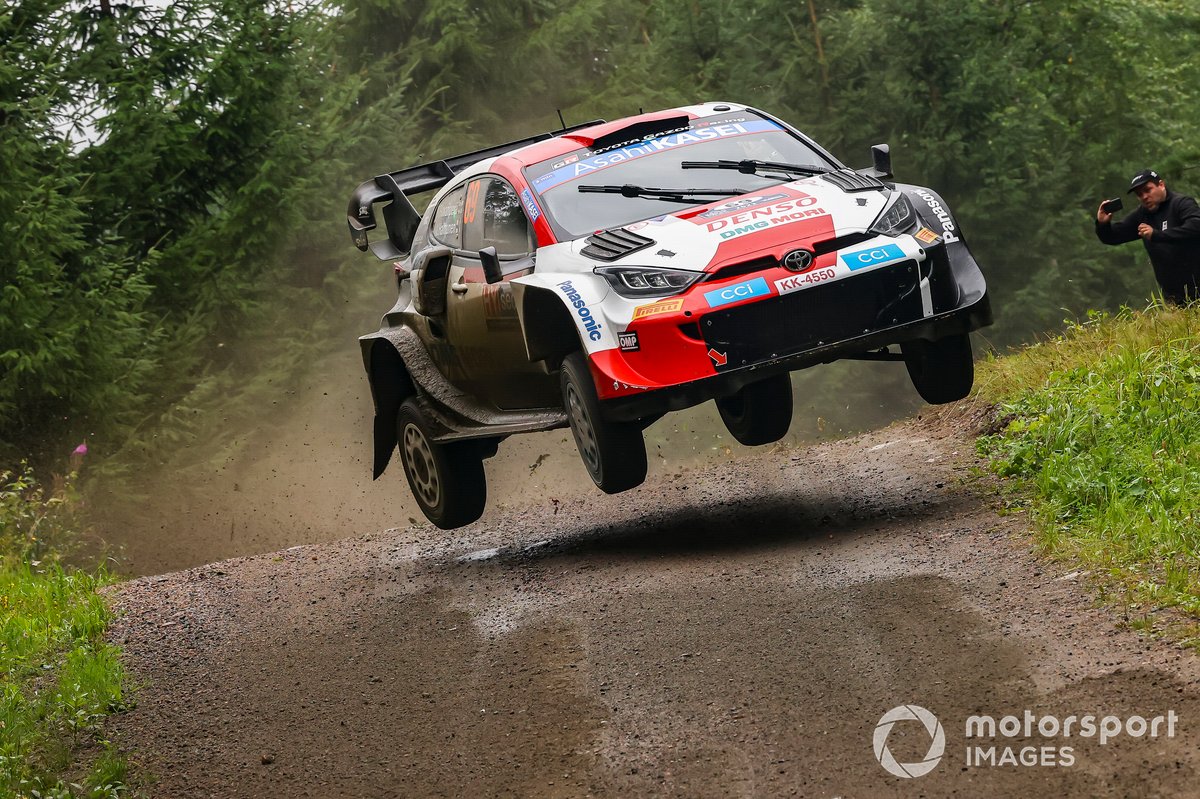 Rovanpera claimed Stage 16 by 1.2s from Tanak as he continued to apply pressure on the leader, but the Hyundai driver continued to fight.

Rovanpera’s stage time elevated the Toyota driver to second overall ahead of a frustrated Lappi, who struggled to see through his damaged windscreen. Lappi could only clock the fourth fastest time, losing 7.2s to Rovanpera, while Evans was also battling with the handling of his GR Yaris.

“I am struggling,” admitted Evans. “I don't have the feeling I want in these drier conditions and the car is moving a lot. Not easy.”

For the third consecutive test, Rovanpera and Tanak locked horns in Stage 17, but this time the pair incredibly clocked identical times. Rovanpera admitted he was a bit more “sensible” due to the loose rocks in the stage, while Tanak labelled his run as “perfect”.

Lappi’s visibility issues left the Finn guessing at times when it came to placing his car for some of the corners, and as result he dropped further behind the top two. Evans also had developing drama caused by an impact in the stage that appeared to knock his left rear wheel out of alignment, which required a fix on the next road section.

Katsuta shipped more time to Neuville in the battle for fifth, but there was a change of position behind as Greensmith overhauled M-Sport team-mate Loubet for seventh.

Rovanpera ended the day in style by taking 3.1s out of Tanak to win Stage 18 and move within striking distance of the rally leader. Neuville was third-fastest on the test, ahead of Greensmith, as Lappi and Evans faded following their respective visibility and suspension issues.

Rally Finland will conclude after four more stages on Sunday.