Oliver Solberg has crashed out of Rally Finland after suffering a violent roll in Friday’s opening stage of the fast gravel World Rally Championship event.

The Hyundai driver hit trouble on the first corner of the rally’s first forest stage resulting in a heavy crash.

Solberg ran wide at the first corner of the 11.75km test approximately 300 metres into the run. The rear of the Swede’s i20 N stepped out into a ditch before being pitched into a roll, landing on its wheels on the other side of the road.

A frustrated Solberg and co-driver Elliott Edmondson emerged from the wreckage unscathed but the i20 N sustained significant damage.

It is unclear at this point as to whether the team will be able to repair the car to allow Solberg to rejoin rally.

This is the Swede’s second crash of his rookie year after spinning out of Rally Croatia, which resulted in his i20 N bursting into flames. 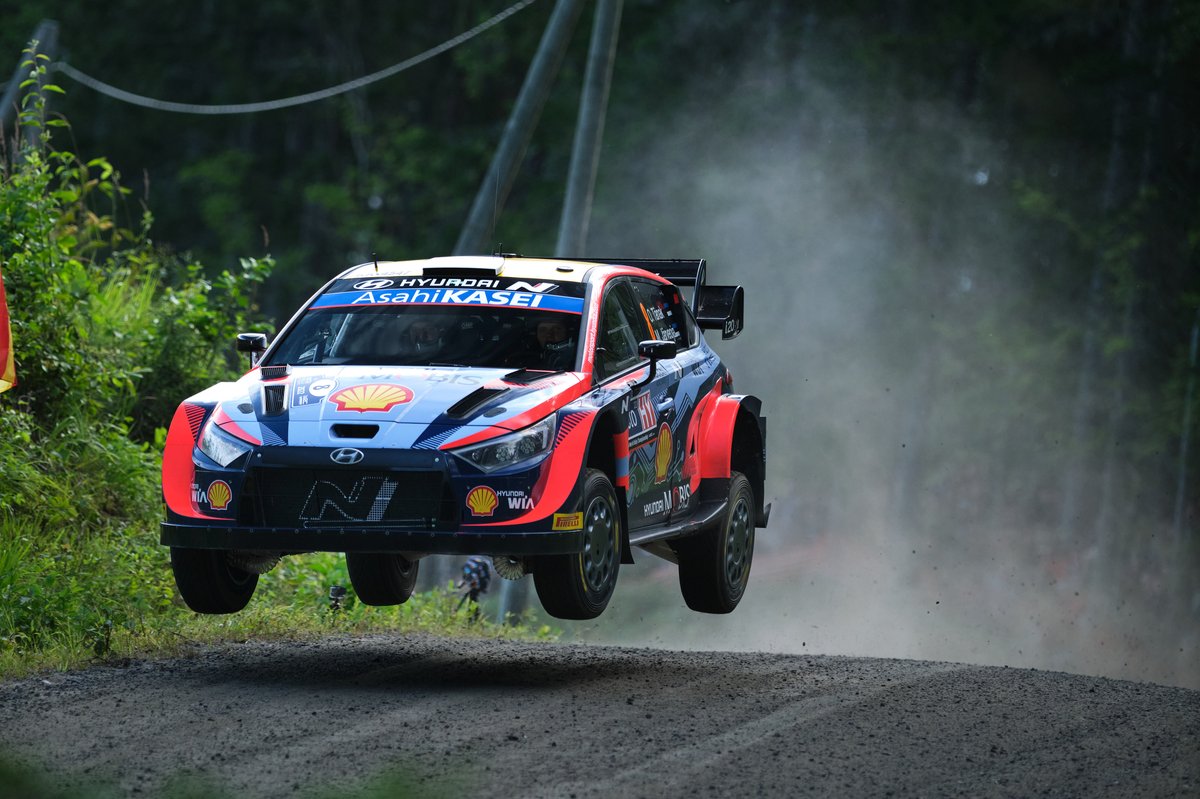 Despite not being completely happy with the handling of his car, Tanak completed the test, 2.7s faster than Toyota’s Esapekka Lappi.

“No doubt it will be cleaning a lot for Kalle and Thierry, so we need to take the advantage at the moment,” said Tanak, who moved into the overall lead.

“For sure, it's not comfortable in the car, but that's the only way we can go at the moment. We need to feel uncomfortable today.”

Championship leader Kalle Rovanpera dropped 6.3s to Tanak after revealing there was more cleaning than he expected being first on the road.

Rovanpera’s Toyota team-mate Takamoto Katsuta lost ground to a 360 degree spin, while Pierre-Louis Loubet was lucky to finish after touching a rock on the apex of a corner.

Lappi once again outlined his strong start to the day by edging Tanak by 0.3s to win Stage 3 to cut the latter’s overall rally lead to 5.0s.

Breen was third fastest to maintain fourth overall behind Evans, who was 0.2s slower than Rovanpera, as the Finn ended the opening two stages 10.8s adrift of leader Tanak in fifth overall.

There was drama for M-Sport’s Fourmaux when the Frenchman clipped a rock in a ditch with the front right on his Puma, which forced the 27-year-old to stop seven kilometres into the stage.

Fourmaux and co-driver Alexandre Coria were able to complete a repair on a suspected damaged steering arm to allow them to slowly complete the stage, but lost almost 17 minutes in the process. The pair had been sitting seventh before the incident.