Toyota's Kalle Rovanpera has surged into the lead at Rally Estonia after a sudden heavy rain shower on the World Rally Championship event wreaked havoc on Friday afternoon’s final stage.

WRC points leader Rovanpera headed into the day’s final test trailing long-time leader Elfyn Evans by 10.9s, but ultimately exited the test with an 11.7s overnight advantage over his team-mate.

Evans had been in command, having claimed five consecutive stage wins, before Rovanpera began to close in with two stage wins of his own as intermittent rain showers began to fall in the afternoon.

Rovanpera was fortunate to avoid the heaviest of the rain on the final stage that left the majority of the field scrambling for grip, resulting in chaos and a late lead change.

Hyundai’s Ott Tanak managed to escape a wild moment on the final stage to end the day in third, 44.3s adrift, while Toyota’s Esapekka Lappi came home in fourth more than a minute in arrears.

Despite struggling for confidence, team-mate Thierry Neuville completed the loop in fifth ahead of Adrien Fourmaux, who led M-Sport’s charge after Craig Breen retired in the morning loop.

After a dry morning, the forecasted rain finally arrived during the midday service. As a result, the crews faced challenging damp conditions and rutted stages for the afternoon loop.

The conditions initially failed to halt Evans’ charge, as the Welshman skipped through patches of standing water to notch up his fifth consecutive stage win and extend his lead to 19.9s.

Rovanpera was first to tackle the conditions, but the Finn still managed to only drop 1.2s in his pursuit of rally leader Evans. He had been promoted to second when he began the afternoon, after Tanak’s 10 penalty for failing to engage electric power during a designated EV zone on Thursday night. 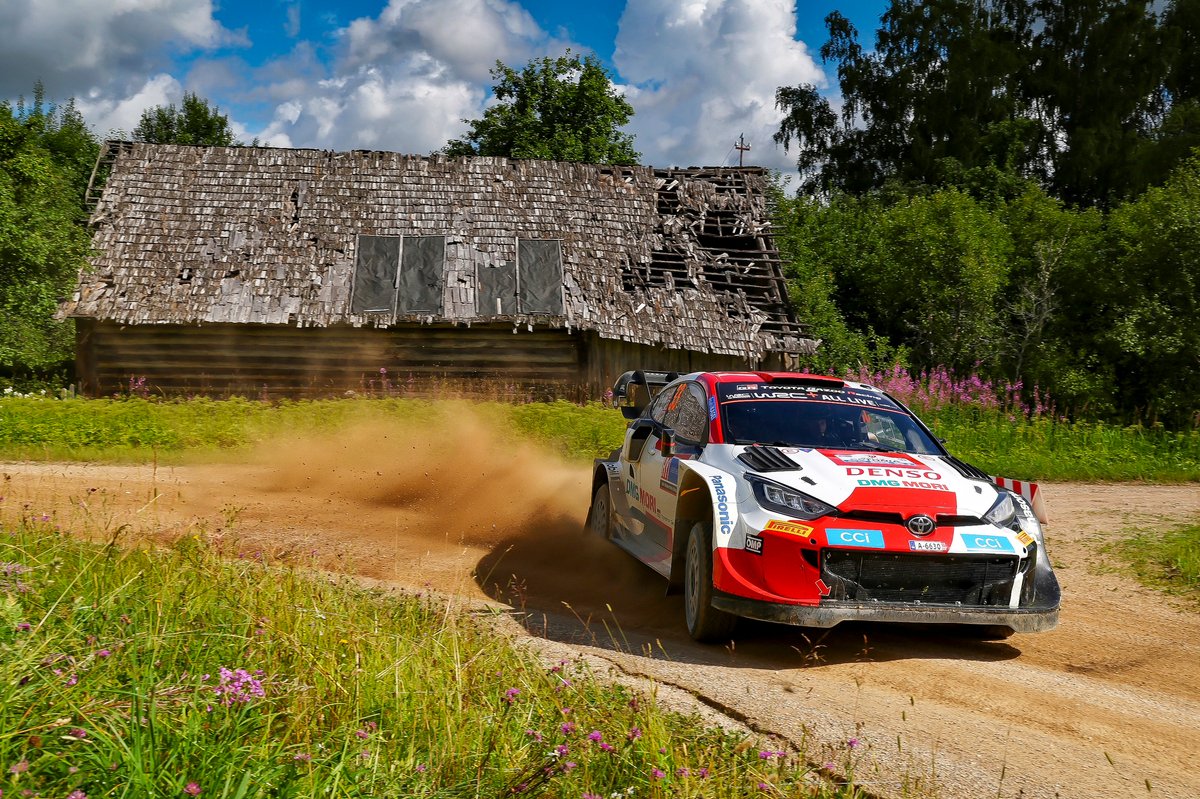 Tanak was unable to match the two Toyotas at the front in the slippery conditions and lost 6.5s to Evans, while posting the third fastest time.

The 2019 world champion's team-mate, Neuville, continued to struggle and his cautious approach resulted in the Belgian dropping behind a charging Lappi to fifth overall.

Lappi’s resurgence was the result of Toyota fixing a brake issue he suffered in the morning stages. However, the Finn was lucky to avoid a trouble when he hit an anti-cutting device.

There was however drama for Gus Greensmith (M-Sport) and Oliver Solberg (Hyundai), who both suffered punctures. The front-left failure for the latter cost the Swede half a minute, on top of a 10s penalty for a being a minute late out of service.

Sudden sporadic rain showers threw several runners a curveball in Stage 7, but it was Rovanpera who managed to take advantage to end Evans’ streak of stage wins.

Rovanpera managed to slide his way to a time 4.3s faster than Tanak, who lost time after missing a junction, while Evans dropped 5.5s.

Solberg’s difficult Friday shown no signs of letting up when he lost his power steering following a glancing impact to the front of his car that left no visible signs of damage. The problem cost the son of 2003 world champion Petter a further two minutes and dropped him to 11th overall.

Rovanpera again set the pace on the next test (Stage 8) to increase the pressure on Evans with the gap down to 10.9s. Lappi meanwhile set the third fastest time to take time out of Tanak's third place. 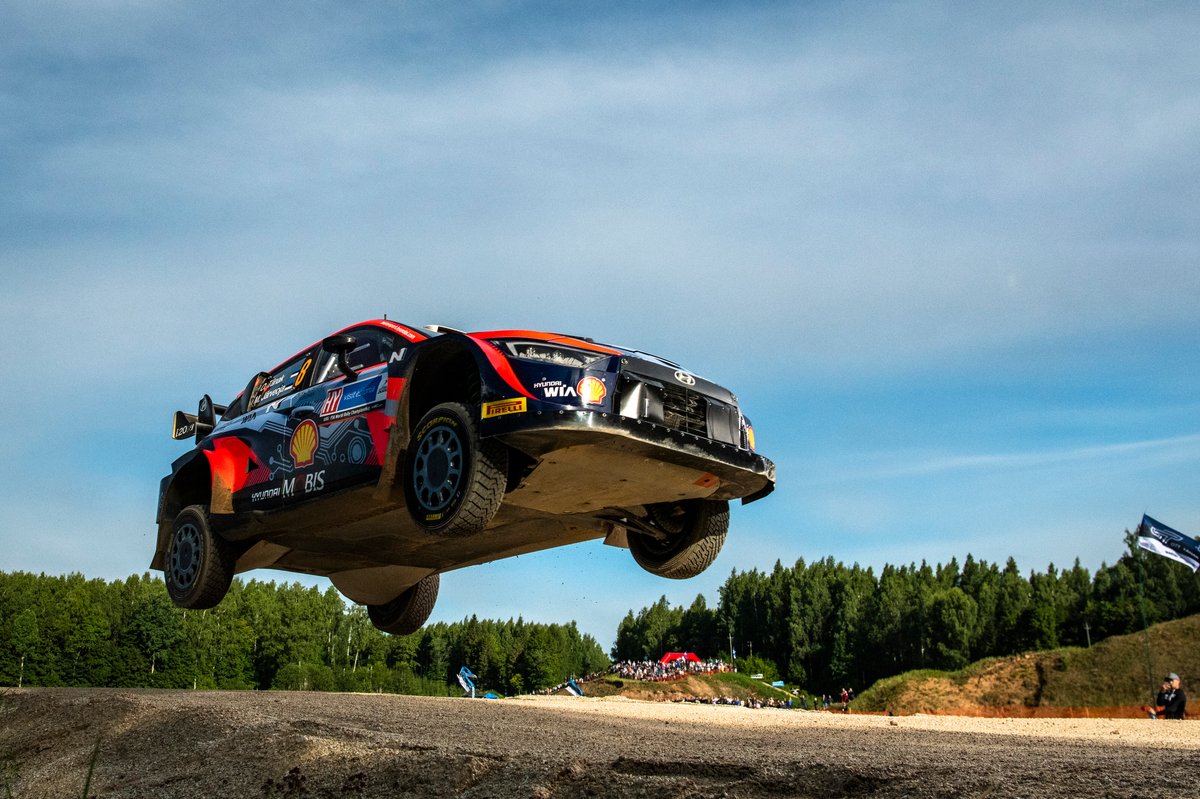 There was drama for Fourmaux, who overshot a junction as rain began to hamper the later runners. The mistake resulted in the M-Sport driver briefly handing sixth overall to team-mate Pierre-Louis Loubet, who had started the afternoon loop in ninth.

After attempting to fix his power steering issue, Solberg started the stage 19 minutes late resulting in a three minute penalty, before trundling to the stage end.

However, there was a twist on the final stage when a light shower turned into torrential rain after Rovanpera and Neuville completed the stage. Rovanpera took the stage win and the rally lead, as Evans, who was the fifth driver on the road order, dropped 22.6s.

Evans wasn’t the only driver to suffer as Tanak briefly ran off the road, the home hero's windscreen misting up when a trunking pipe inside the cockpit came loose. Tanak’s quick thinking co-driver Martin Jarveoja managed to limit the damage by holding the pipe up with his foot, while calling the pacenotes.

The rain continued to wreak havoc as Loubet, Greensmith and Lappi were all caught out at a technical section following a jump towards the end of the test. Loubet aquaplaned into a bank, which put his Puma on its side. Luckily, a contingent of fans were on hand to right the car, but the Frenchman lost two minutes and dropped back to ninth overall.

Greensmith also aquaplaned into a rock but was able to keep going with minimal time loss, while Lappi also ran wide and dropped time.

Rally Estonia continues on Saturday with a further nine stages awaiting the field.