Evans ended the loop of four slippery asphalt stages, impacted by patchy rain, with a 2.3s lead over Tanak. The Welshman inherited the lead after team-mate Rovanpera suffered a violent roll on Stage 2.

Rally favourite Thierry Neuville held third, his Hyundai some 8.8s in arrears to Evans after losing time to a driver error on the opening stage. M-Sport’s Adrien Fourmaux had led the Ford team’s charge in fourth, but dropped to eighth on Stage 4 after a late deluge hampered his progress, promoting Esapekka Lappi (Toyota) and Craig Breen (M-Sport) to fourth and fifth respectively.

While the forecasted rain held off for the start of the rally, the narrow roads proved incredibly slippery and conditions were exacerbated by dirt being dragged onto the tarmac surface. Rovanpera made the most of the perhaps the cleanest road conditions to set the pace through the rally's first test.

The Finn emerged 2.5s faster than Evans, but by the time the 2021 WRC runner-up entered the stage the conditions had worsened making his time equally as impressive.

Tanak emerged third fastest, struggling with the handling of his i20 N, but the Estonian didn’t have to wrestle the car as much as home hero Neuville. The defending event winner, who topped Thursday's shakedown, said he had “zero grip”.

Neuville overshot a junction, requiring him to turn his car around before rejoining the road. The mistake contributed to a 10.6s time loss and left him sixth fastest.

Breen was also suffering from a lack of grip as the Irishman dropped 14.2s, while Toyota’s Takamoto Katsuta was lucky to avoid a moment when he clipped a kerb. Fourmaux ended the stage heading M-Sport’s charge in fifth, behind Lappi.

The rally was turned on its head in Stage 2 when leader Rovanpera’s impressive run was halted by a violent crash. The world championship leader, agitated by an unspecified delay to the stage start, understeered through a fast left-hander and ran wide into a ditch which pitched the GR Yaris into a series of frightening rolls before eventually landing on its wheels.

The car suffered a significant damage in the crash, but luckily both Rovanpera and co-driver Jonne Halttunen emerged from the wreckage unscathed. The pair exited the vehicle through the front of the vehicle, the windscreen having been removed in the impact. 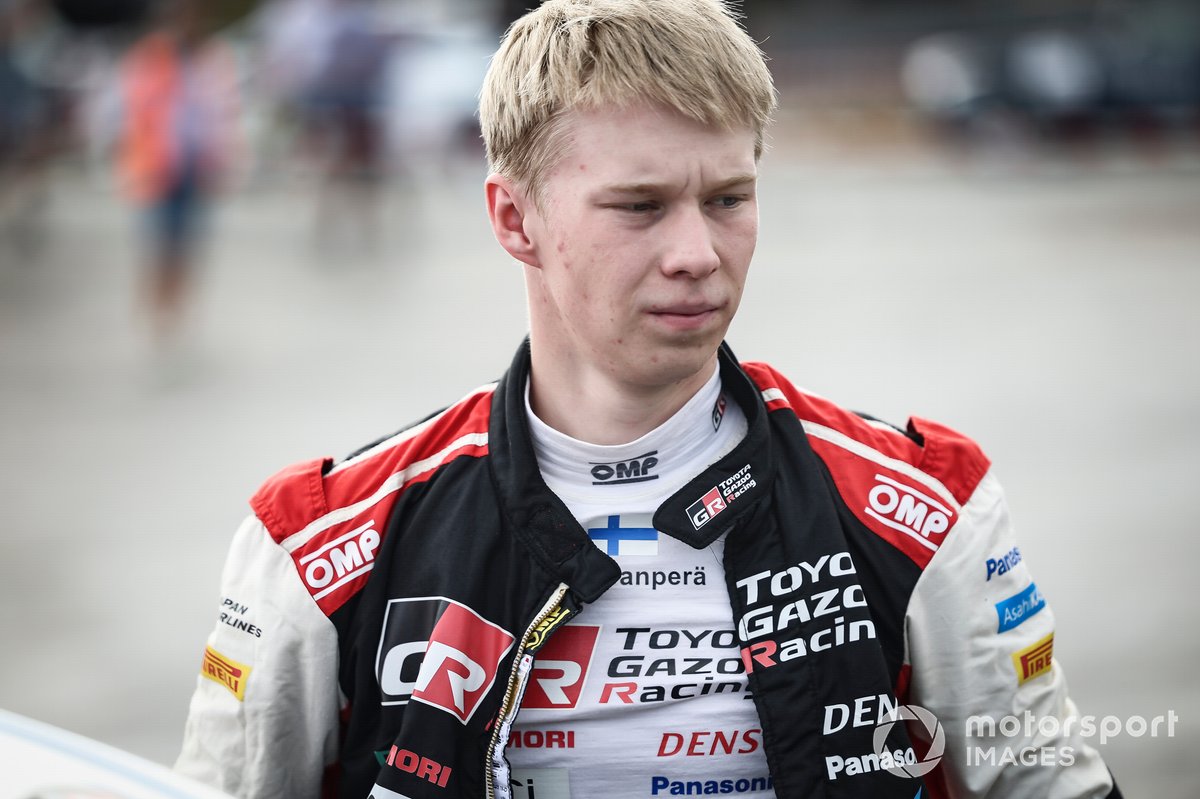 Rovanpera’s shunt handed the rally lead to Evans, who managed to clock the second fastest stage time with an effort 0.3s slower than a still uncomfortable Neuville.

Tanak was third fastest, despite suffering a puncture during the final six kilometres of the stage, while Katsuta’s eventful start continued with a junction overshoot. Team-mate Lappi also merged from a collision with a fence post that removed some bodywork from the rear of his GR Yaris.

Patchy rain arrived for the later runners into the stage, with Breen the first to experience the changeable conditions. The Irishman dropped a further 7.8s.

The rain stopped for Stage 3, which developed into the most hotly-contested of the loop as Tanak took the honours by 0.1s over Neuville. The top five were covered by 0.8s as an improving Breen clocked the third fastest time ahead of Evans and Fourmaux, the latter’s time propelling him into fourth overall.

Tanak won the stage despite complaining about a broken component on his i20 N, while team-mate Neuville almost overshot a junction but managed to recover the car from a lengthy slide.

There was however drama for Katsuta, who trundled to a halt within sight of the stage end due to a gearbox problem. The Japanese driver was forced to pull over briefly, before engaging EV mode which allowed him to crawl to the finish, losing 1m22s in the process. He was forced to complete the final stage of the loop stuck in third gear.

Evans managed to extend his 0.6s lead over Tanak to 2.3s after winning the final stage of the morning, which was held in changeable weather conditions as rain arrived for the later runners.

A repeat of the morning’s four stages this afternoon will conclude Friday’s action.